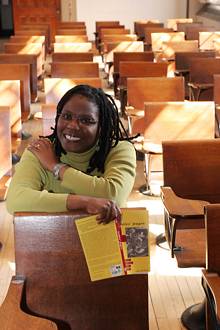 In her new book, Noliwe Rooks examines the content, messages and impact of eight African-American women’s magazines from the turn of the century. She found that some publications addressed topics such as gender politics and socioeconomic issues long before they appeared in the mainstream press.

From the March 21, 2005, Princeton Weekly Bulletin

Noliwe Rooks has unearthed a trove of forgotten publications that reveal significant historical information on African-American women’s issues long before the civil rights and feminist movements.

Rooks, the associate director of Princeton’s Program in African-American Studies, has turned her findings of obscure but influential magazines from the late 1800s and early 1900s into a new book, “Ladies’ Pages: African-American Women’s Magazines and the Culture That Made Them.” It is a follow-up to Rooks’ award-winning “Hair Raising: Beauty, Culture and African-American Women.” The 1996 book, regarded as the first academic work on how concepts of beauty among black women were related to racial identity, gender politics and social acceptance, established Rooks as a leading young scholar on African-American culture.

Rooks’ latest book, published by Rutgers University Press, sheds light on the intra-racial conversations that took place among black women at the turn of the 20th century. The book also debunks the popularly held belief that the 35-year-old Essence was the first significant magazine for African-American women.

“Before ‘Ladies’ Pages,’ there wasn’t much historiography that indicated that black women were discussing the issues of sexuality, self-presentation, child care and other important women’s issues,” said Nell Irvin Painter, Princeton’s Edwards Professor of American History and a leading historian of the United States. “What this book shows is that black women were talking about these issues in print long before they were raised in the mainstream.” 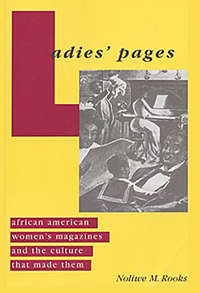 Rooks, who earned her Ph.D. in American studies from the University of Iowa, first came to Princeton in 1997 as a visiting postdoctoral lecturer and returned in 2000 to serve in her current position. Her research interests include the study of class and gender in African-American communities during the late 19th and early 20th centuries. Recently, she has taught courses on “Black Women’s Studies” and “Migration and Urban Space.” She also serves as a lecturer in the history department.

As a graduate student in the mid-1990s, Rooks realized that her scholarly interests were somewhat obscure, and research in these areas might become frustrating. But she committed herself to using creative and innovative methods to track down information and sources. “Ladies’ Pages” was the result of much persistence and a bit of detective work, she said.

While working on “Hair Raising,” Rooks had conducted extensive research on Madam C.J. Walker, an early 20th-century entrepreneur who became the nation’s first African-American millionaire by inventing products that revolutionized hair care for black women. During that research, she stumbled across a reference to a publication called Woman’s Voice in the Walker archives.

She discovered that Walker’s company provided funding for the magazine to African-American hairdressers in Philadelphia, where it had been published from 1912 to 1927. A range of 1,500 to 4,000 copies were printed every month, however there were no copies in the archives.

“In the world of magazine publishing and even by today’s standards, that’s a long life for a niche magazine,” Rooks said. “That meant it had to exist somewhere, because in the context of African-American publishing that was a good long period of time and a good number of magazines.”

Initially, she found printing receipts and other accounting paperwork for the magazine. Still, Rooks could not locate copies or any other evidence of its existence outside of the Walker archives, despite searching likely sources such as New York City’s Schomburg Center for Research in Black Culture, the Library of Congress and the Moorland-Springarm Research Center at Howard University in Washington, D.C.

“I was so close. I had all the business records, so I knew it existed. Later, I found mentions of the magazine. W.E.B. Du Bois noted it in the NAACP’s magazine, Crisis. I also found letters and newspaper clippings citing the magazine,” Rooks said. “But I couldn’t find a single copy.

“I became obsessed with finding it,” she continued. “I spent an entire week refusing to write another word for my book until I found these magazines.” Then she reflected back on the time she spent at Spelman, the historically black women’s college in Atlanta.

“When I was at Spelman getting my B.A., one of the things I always heard people talking about was how much really phenomenal information there was sitting in boxes,” she said, noting that some smaller universities that receive library donations may not have the financial resources to properly store or even catalog all of their holdings.

With that in mind, Rooks decided on a new tactic to find Woman’s Voice. Instead of searching through reference databases and card catalogs, she began asking librarians at the nation’s historically black colleges and universities to check their storage areas. She finally hit pay dirt at Fisk University in Nashville.

Locating copies of Woman’s Voice was a turning point for Rooks and her research. She began to search for other black women’s magazines. She found that between 1891 and 1950 there were eight African-American women’s magazines.

Rooks closely examined the content, messages and the subsequent impact these publications had on readers, concluding that the publications were very influential.

In addition to offering cooking and household hints, some magazine editors and writers doled out advice and guidance to women on how they and their children should conduct themselves in public. During the black migration from the South to the Northeast and major Midwestern cities, some of the urban magazine editors dictated what they considered to be “acceptable” behavior, dress and speech to newly migrated readers from rural states, Rooks said.

Half-Century Magazine, which began publishing in 1916, “is full of anecdotal evidence of the fashion concerns the African-American elite held about those who had recently migrated,” Rooks wrote.

Half-Century, named to mark the 50-year anniversary of the enactment of the Emancipation Proclamation, “set out to provide all who read it with what it believed to be much needed help in negotiating a new environment,” according to Rooks. Articles included, “Judging By Your Clothes: What Do People Think of You?” and “Are We Our Brothers’ Keepers?,” which complained that “many members of the race lack respect for conventionalities, decorum and even common decency in public places.”

“In some of these magazines, you can see how class, skin shades and regions were big issues for these women, especially in relation to how they were going to be represented publicly,” Rooks said.

While some of the magazines had articles written and edited by women from educated, upper social classes, other publications represented the voices of “ordinary women sitting on the front stoop,” Rooks said.

In particular, Woman’s Voice, published by hairdressers, addressed topics that concerned working women such as gender politics and socioeconomic issues. “Woman’s Voice was very revolutionary for its time,” Rooks said. “I found narratives about marriage being similar to prostitution. I found that fascinating because that was the argument that you heard in the 1970s feminism movement. But this was being said in the 1920s by black women.”

In her chapter, “Refashioning Rape,” Rooks focuses on Ringwood’s Journal of Afro-American Fashion. First published in 1891, Ringwood’s Journal made early attempts to address the legacy of rape during the era of slavery and its impact on the women of the day. Rooks writes: “For African-American women, slavery, sexual abuse and the defense of their character and morals in the face of dominant, as well as African-American male, sentiments formed the 19th- and early 20th-century political basis for the magazines they published.” Painter called Rooks’ research in “Ladies’ Pages” important findings in American history. “At the turn of the 20th century, many women’s issues were more pressing in so many ways in the African-American community, more so than for other Americans and long before other Americans even addressed them,” Painter said.