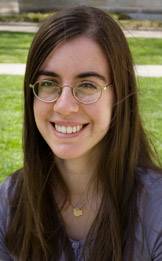 For her senior thesis, Emily Silk studied ghost stories by 19th-century women writers that had been largely overlooked in literary criticism. Silk found that authors used the supernatural to address subjects they couldn't write about in realist genres, such as dissatisfaction with traditional women's roles and women's treatment by male doctors.

Senior Emily Silk's thesis sprung from a 19th-century short story that is a staple of high school and college English courses. Her project ended up taking an out-of-this-world turn.

The short story, "The Yellow Wallpaper" by Charlotte Perkins Gilman, addresses a theme that intrigued Silk -- the intersection of medicine and gender in 19th-century America, and the way male doctors treated women diagnosed with so-called "hysteria." But Silk, who is an English major, was reluctant to make Gilman's story the focal point of her thesis. "It had been analyzed to death," she said.

Instead, Silk dug into 19th- and 20th-century American literature and found other women writers who were exploring the same themes, but in an unusual genre: supernatural fiction.

"They were writing ghost stories, using the genre to write about things they weren't able to talk about in realist genres, such as sexuality, marriage problems, domestic abuse and dissatisfaction with traditional women's roles," as well as their treatment by male doctors, Silk said. "The most exciting part is that many of these stories, despite their high quality, have been largely overlooked in the critical literature on supernatural fiction." 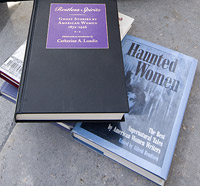 The short stories refute or subvert the way that male doctors perceived and treated women, specifically the prevalence of the paternalistic "rest cure" about which Gilman wrote. This treatment prescribed isolation, a specific diet and complete bed rest for women with a broad range of unexplained symptoms.

Silk's thesis "actually defines a whole new literary genre: the supernatural rest cure story," said Diana Fuss, the Louis W. Fairchild '24 Professor of English, who is Silk's adviser. "Emily deftly shows how these late 19th- and early 20th-century ghost stories worked to complicate and even subvert dominant medical practices at the time. I have never read a senior thesis as ambitious and entertaining as this one. It tackles a whole range of difficult historical, literary and cultural questions with considerable grace, intelligence and style."

One early 20th-century work Silk studied, "The Gospel" by Josephine Daskam Bacon, had just a single paragraph in an anthology written about it, she said. By combing through Bacon's many other writings, including newspaper pieces on women's roles in society in that period, Silk came up with a fresh analysis of the story. "The Gospel" tells the story of a woman who has a nervous collapse after being unable to cope with her domestic duties as a wife and mother. While taking the rest cure treatment, she meets the ghost of a former patient who attempts to convince her to accept a traditional domestic role rather than strive for intellectual engagement. Though the anthology deemed Bacon’s story a positive portrayal of the rest cure, Silk asserts that the tale conveys pessimism about the treatment 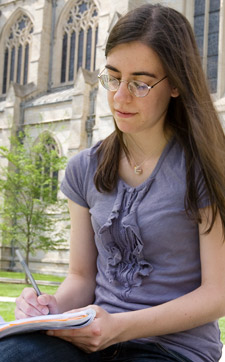 Silk got so wrapped up in her research on early American ghost stories that the topic also became a focus of another senior thesis she wrote -- a collections of poems for her certificate in the Program in Creative Writing.

Silk got so wrapped up in her research on early American ghost stories that the topic also became a focus of another senior thesis she wrote -- a collections of poems for her certificate in the Program in Creative Writing.

Ten of the 31 poems in her creative thesis involve a character she invented named The Panoptic Man, who has supernatural powers. "He can see things others don’t. He sees the future, and he talks to the Sandman and to vampires," Silk said. "I didn’t plan for the two theses to be connected, but now I see a thematic overlap, which is cool. I like it when work in one class informs work in another class."

Tracy K. Smith, an assistant professor of creative writing in the Lewis Center for the Arts who advised Silk's creative thesis, called her poems "exhilarating -- rich with music, insight and a rare inventive quality that often makes me feel like she is refashioning the English language into something sharper, stranger and somehow more true. Her Panoptic Man sequence is quirky, empathetic, unsettling and boldly beautiful."

Smith also lauded Silk's work ethic. "Her commitment to the discipline of crafting and recrafting poem after poem isn't just admirable; it's outright inspiring," she said.

Silk's passion for literature blossomed during her sophomore year in a class on English writers from the 14th to the 18th century, taught by Associate Professor of English Jeff Dolven.

"I saw how much fun it can be to dive into a text," Silk said. "The class made classics by authors that I wasn't initially excited about -- Milton, Chaucer --come alive, and they are now among my favorite writers."

After graduation, Silk, who is from Basking Ridge, N.J., will be a Princeton Project 55 Fellow, working with the CityBridge Foundation in Washington, D.C. Silk will conduct research on best practices in education and put together reports with suggestions for improving aspects of the D.C. public school system. After that, she may pursue graduate school in American literature.