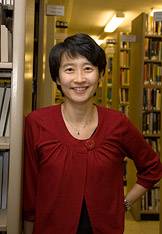 Janet Chen, assistant professor of history and East Asian studies, was drawn to Chinese studies during her own college days after the killing of protestors in Tiananmen Square. She currently is finishing a book chronicling the experience of poverty in early 20th-century China. She has uncovered records of poverty-stricken Chinese citizens that reveal painful chapters in the country's social history.

When assistant professor Janet Chen decided to write her dissertation on the experience of poverty in early 20th-century China, fellow scholars warned her of the difficulties she would face.

"Everyone said, 'Poor people in China were illiterate,'" said Chen, who was then in graduate school at Yale University. "We don't have historical records from them. You're going to have to study poverty from the top down — from the government's perspective, the sociologists' perspective."

But Chen didn't want to study only what bureaucrats had to say about life in workhouses and shantytowns. She wanted to know what the experience was like for those who lived it. She decided to travel to China and see what she could find — tenaciously uncovering records and voices that reveal painful lost chapters in China's social history.

Searching through national and local archives in Beijing and Shanghai, Chen discovered a trove of documents — petitions to be set free from workhouses, letters of complaint to government officials about life-threatening conditions, even accusations of murder. They were written by hired scribes and literate Chinese people who wound up homeless or impoverished in the chaotic atmosphere in China during the first half of the 20th century.

The first letter she found, in the Shanghai Municipal Archives, was from a group of 30 people living in a Shanghai shantytown in 1947. They implored the government to abandon a plan to tear down their straw huts. The end of the letter had a list of names, and beside each one was a thumbprint in red ink.

"They were illiterate, but they had found one person to write this letter, and they all testified with their thumbs," Chen said.

David Howell, the chair of the Department of East Asian Studies, said Chen has "brought a new perspective and new evidence to bear on the social history of China during a period of tremendous upheaval. She uncovered sources that others had not used before, and she used them in a way that succeeded in giving voice to otherwise voiceless people."

Chen currently is teaching an undergraduate course on Chinese history from 1850 to the present. Sophomore Angela Park said Chen shares "a lot of interesting stories that are not easily found in history textbooks, and they make history more lively and tangible."

The quest for primary-source documents such as the letter with the thumbprints is what drove Chen, who has taught at Princeton since 2006, to the field of history.

"I knew I wanted to be a historian when I realized that I really like to read the footnotes," she said. “I think footnotes are just as interesting as the text."

Chen, who has a joint appointment in history and East Asian studies, resisted her parents' efforts to get her to speak Chinese as a child. Born in Taiwan, Chen moved to California with her family — she has five siblings — when she was 6.

"My dad would always holler at us kids to speak in Chinese, and we would all go silent," she recalled. "It was the best way to get some peace and quiet around the house."

But as a freshman at Williams College in 1990, one year after the killing of protesters in Tiananmen Square, Chen was drawn to a history course on China. "There was a real sense of discovery for me," she said. After that, Chen focused her studies on Chinese history and in 1994, after earning her bachelor's degree, she went to mainland China on a teaching fellowship, serving as an English instructor in Guangzhou at a medical school and a military hospital run by the People's Liberation Army.  She taught at Yale for one semester after completing her Ph.D. and then joined the Princeton faculty.

Chen currently teaches "China, 1850 to the Present," an introduction to the history of modern China for undergraduates, which is similar to the course at Williams that drew her to the field. Her class for graduate students covers theoretical debates and empirical questions about topics in 20th-century China such as urban life and the Communist Revolution.

"Janet explores very important aspects of the social and cultural history of modern China in her work and in her teaching," said William Jordan, the chair of the history department and the Dayton-Stockton Professor of History. "She offers our students extraordinary insights into modern Chinese culture and society, based not only on her historical research but also on her experience" of teaching and doing archival research in China.

Sophomore Angela Park, who is taking Chen's undergraduate course this semester, said Chen shares with the class "a lot of interesting stories that are not easily found in history textbooks, and they make history more lively and tangible."

In Chen's course two years ago on "Research in Modern Chinese History," she offered "practical guidance — for research and writing grant applications — for students who were new to the field," said graduate student James Bonk. "She gave assignments that challenged us to think beyond some of the analytical and temporal categories that have shaped the field of modern Chinese history."

Chen also has taught a course on "Research in Modern Chinese History," in which she offered "practical guidance — for research and writing grant applications — for students who were new to the field," said graduate student James Bonk. "She gave assignments that challenged us to think beyond some of the analytical and temporal categories that have shaped the field of modern Chinese history."

Understanding the 'crime' of poverty

Chen's dissertation research forms the basis for her first book, "Guilty of Indigence," which she currently is finishing. The book, a history of the experience of poverty in early 20th-century China, explores the birth of the workhouse and the criminalization of poverty in Beijing and Shanghai. Anti-vagrancy laws meant that beggars and homeless people were thrown into workhouses, even if they were disabled or otherwise unable to work, Chen said. The conditions in the workhouses could be dismal — food was often scarce, diseases spread quickly and allegations of abuse were common. Several letters spoke of alleged murders at workhouses, prompting investigations by authorities.

Finding testimonials about the circumstances in the workhouses required following the trail of a correspondence or incident. Because the government changed so often in China during this period, Chen had to track down records in several archives, but she enjoyed the detective work. When she discovered letters complaining about workhouse conditions, she tracked ensuing investigations by finding police reports, newspaper accounts and reports by local government officials.

"These records were scattered all across China," Chen said. "But there were many more than you would expect."

Chen's next project centers on the social history of Mandarin, which is based on the northern Beijing dialect and was adopted as the “national language” in both China and Taiwan. Chen is interested in exploring how schoolteachers taught a language they didn't speak themselves, how they approximated sounds for Mandarin when it wasn't yet the lingua franca, and what effects learning a new common language had on local communities. In addition to archival research, Chen plans to examine radio broadcasts, the first Chinese movies with sound and other aural sources for her research.