David Leheny, the Henry Wendt III '55 Professor of East Asian Studies, joined the Princeton faculty in 2007 and quickly became known for his charismatic and engaging teaching. "When you're dealing with college students, this is one of the times in people's lives when they're most available to think broadly and creatively about things," he said. "You have kids in classes with incredibly diverse interests and experiences, so I just love the interaction with students."

In the span of 50 minutes, a lecture by East Asian studies professor David Leheny on Asian "soft power" begins with music from an album called "Punch the Monkey" and touches on two Korean pop sensations, an anime film, the Beijing Olympics opening ceremonies, two NBA stars, "American Idol," rice cookers, amusement parks and the top 20 animated features in the United States in 2002.

The cultural references -- all relevant to the discussion of Asian influence around the world -- are typical for Leheny, the Henry Wendt III '55 Professor of East Asian Studies, who joined the Princeton faculty in summer 2007. Most of his anecdotes produce laughter before Leheny rapidly moves on to the next insight.

Leheny co-taught the course, titled "Contemporary East Asia," with Steven Chung and Amy Borovoy, assistant professors in East Asian studies during the fall semester. He also taught a junior seminar on crime and punishment in East Asia and is teaching a graduate seminar on the politics of deviancy, punishment and social order in East Asia for the spring term.

"Most of my work engages the way in which Japanese officials and public intellectuals and writers try to think about what kind of country they want to build in a world that, many of them would argue, they didn't create," Leheny said.

The chair to which Leheny was named was established in 2004 by Henry Wendt III, a 1955 alumnus who had worked in the pharmaceutical industry in China and Japan, and who wanted to support teaching and research in contemporary East Asian studies.

"We wanted someone with excellent credentials as a social scientist -- a dynamic, rising star -- but also someone who would be comfortable in an area studies program, with excellent language skills and a 'feel' for the place and its culture. Dave fit the bill on both counts," Howell said. "We also wanted a strong teacher of undergraduates, and since Dave won a major teaching award at the University of Wisconsin-Madison, we knew he'd be excellent in that regard, too." 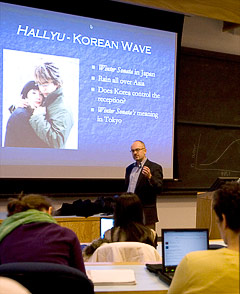 For Leheny, coming to Princeton has meant expanding the topics of his research and teaching from Japan to other parts of East Asia. "This is probably the hardest I've ever worked, but I don't think I've ever been as interested in what I'm doing," Leheny said.

Leheny landed in academia because it allowed him the freedom to pursue what seemed interesting, he said. His father, a schoolteacher, also inspired him to turn his intellectual curiosity into a life's work.

Leheny grew up in Danbury, Conn., with his father, his mother -- a judge -- and his two sisters. After high school, he stayed in Connecticut, playing the saxophone and studying jazz at Wesleyan University before earning a degree in government in 1989. Eager to see more of the world, he traveled to Japan to teach English for a year through the Japan Exchange and Teaching Program. Leheny described the year, spent in a rural part of Chiba City, as lonely and odd. But when he enrolled in Cornell University's graduate program in government, he chose to study Japan because of his familiarity with the country.

In the middle of his studies, Leheny accepted a two-year graduate fellowship at the University of Tsukuba and followed it with a two-year stint as the editor and translator of a magazine at the Institute of Social Science at the University of Tokyo. Though the decision to stay in Japan delayed his graduate degree, Leheny said the editing experience was critical in exposing him to a wider variety of fields and topics related to Japan, as well as debates between Japanese scholars.

When he returned, Leheny finished his dissertation on Japan's tourism policy, which turned into his first book, "The Rules of Play: National Identity and the Shaping of Japanese Leisure." The 2003 book -- named an "Outstanding Academic Title" by Choice, an academic review journal -- examined how the Japanese government tried to develop leisure industries based on models of advanced industrial nations, while still trying to preserve the national mantra that Japanese people and culture were unique.

"He always goes places where nobody else goes and does things in a way that nobody else does," said Katzenstein, who also is the current president of the American Political Science Association. "His first book was on leisure in an insanely hard-working country."

After earning his Ph.D., Leheny accepted a position in political science at the University of Wisconsin-Madison, where from 1998 to 2007 he taught courses on Japanese politics, comparative politics and terrorism. During his tenure, he also received several fellowships, returning to the University of Tokyo for two and a half years, spending six months in the coordinator for counterterrorism's office at the Department of State, and co-designing and co-teaching a course at Harvard University's John F. Kennedy School of Government.

In the meantime, he wrote his second book, "Think Global, Fear Local: Sex, Violence and Anxiety in Contemporary Japan." Released in 2006, it examined how Japan used its participation in international criminal justice agreements to deal with internal problems, such as terrorism and "compensated dating" between teenage girls and adult men.

Though Leheny's research interests were outside of the mainstream in his department, his work was well regarded, said Mark Beissinger, chair of the political science department for part of Leheny's time at Wisconsin and now a politics professor at Princeton.

"The Japanese leisure industry and child pornography and prostitution are not typical objects of analysis for a political scientist," Beissinger said. "But David brilliantly uses these as windows into Japanese political culture and into the ways in which norms and identities shape behavior. His work is some of the most important on contemporary Japanese society."

Students enjoy Leheny's classes because of his depth of knowledge and his ability to convey concepts with humor and an abundance of energy.

Leheny was also an immensely popular lecturer and won the Chancellor's Distinguished Teaching Award in 2007.

"I love teaching," Leheny said. "It's my favorite part of the job, because I like talking with people. When you're dealing with college students, this is one of the times in people's lives when they're most available to think broadly and creatively about things. You have kids in classes with incredibly diverse interests and experiences, so I just love the interaction with students."

The opportunity to teach at Princeton was attractive to Leheny on many levels, he said. He would have a stellar network of colleagues in a range of disciplines with whom he could collaborate, the students were exceptional, and the University's priorities were in line with his own.

"Some of President Tilghman's initiatives, I just fell in love with -- internationalization, efforts to promote student diversity," Leheny said.

Yet coming to Princeton and switching fields has had its challenges, such as his two courses during the fall term that focused broadly on East Asia.

"Because I'm trained to teach political science, trying to engage the region from an interdisciplinary perspective is the really hard part," he said. "That's been a little bit more nerve-wracking, but it's also been more rewarding."

"Professor Leheny is one of the most charismatic and engaging professors I have studied under," Chen said. "He has a knack for addressing any questions I might have before I even have time to formulate them."

Leheny said Princeton's smaller class sizes have forced him to rethink his teaching, making it more interactive, and also have allowed him to focus more on students' writing rather than exams designed for hundreds.

"The most important thing I try to get across in my classes is critical thinking, which I think is intimately linked with writing," Leheny said. "With a smaller number of students, I can go over their writing in depth and try to make certain I'm helping them to express themselves creatively and innovatively while also respecting the rules of grammar. That's the one place where I think I'm hardcore."

Jessica Kellogg, whose senior thesis in East Asian studies is an analysis of Japanese culture through Japanese television advertising, said Leheny has been a committed adviser and has helped her improve her work.

"When we meet, he always has a handful of different sources he can think of off the top of his head. I'm always impressed with the range of knowledge he displays," she said. "He approaches questions in a completely different way than I do, which betters my research and findings. When I need help with something, he is never too busy."

His colleagues also have welcomed his addition to the department. The chair, Howell, said Leheny has been personable and eager to learn about others' work. Borovoy, who co-taught the "Contemporary East Asia" course with Leheny, said they share ideas on modern Japan frequently and often read each other's essays.

In addition to teaching, Leheny is serving as departmental representative, as a faculty fellow at Whitman College and, this coming summer, as a co-teacher of a Global Seminar sponsored by the Princeton Institute for International and Regional Studies in Hanoi.

In Vietnam, Leheny hopes to begin a third research project -- on Japan and Vietnam's relationships with world superpowers -- while building his language skills in Vietnamese.

His other projects are a book on digital content policies in Japan based on regulators' image of Japanese values -- for example, regulation of video games such as "Grand Theft Auto" for their perceived propensity to spur violent acts; and an edited volume on Japanese foreign aid, with Kay Warren, an anthropology professor at Brown University who previously taught at Princeton.

Despite a hectic schedule, Leheny said he feels settled and is enjoying the flexibility and opportunities at Princeton.

"This is probably the hardest I've ever worked, but I don't think I've ever been as interested in what I'm doing," he said.

Because he studies contemporary Japan, Leheny often draws on pop culture icons from film, television, music and video games, such as Pokémon, in his lectures and research.