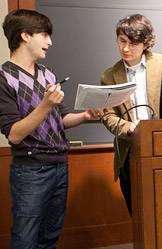 The course "East Asian Humanities I: The Classical Foundations" introduces students to 2,000 years of art, literature, philosophy and religion from China, Japan and Korea, starting in antiquity and ending in the 18th century. Kerim Yasar (right), a lecturer in the Council of the Humanities and East Asian studies -- who teaches the class with East Asian studies professor Richard Okada -- talks with sophomore Richard Jones.

In addition to reading primary texts in translation, the students attend hands-on demonstrations of Japanese drumming and calligraphy. Here, the word "tiger" is written in Chinese characters (top) and Japanese hiragana (bottom) by Tomoko Shibata, a lecturer in East Asian studies.

Instructors: Richard Okada, professor of East Asian studies, and Kerim Yasar, a lecturer in the Council of the Humanities and East Asian studies and the East Asian Studies-Cotsen Postdoctoral Fellow in the Society of Fellows in the Liberal Arts. Okada is an expert on "The Tale of Genji," a classic of Japanese literature from the 11th century that is sometimes called the first modern novel. He also studies literary theory and contemporary Japanese culture, including animation, live-action film, hip-hop music and television dramas. Yasar earned his Ph.D. in East Asian languages and cultures from Columbia University. He currently is revising his dissertation, which is a cultural history of auditory technologies such as the telephone, phonograph and radio in Japan from the late 19th century to the end of World War II. 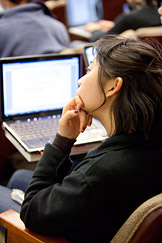 The course was created to enhance students' understanding of the East Asian tradition in a manner that highlights its similarities and contrasts with Western culture. Here, sophomore Claudia Park listens to a recent class discussion.

Description: The course is an introduction to 2,000 years of the art, literature, philosophy and religion of China, Japan and Korea, from antiquity to the 18th century. This semester the course, which was first taught in 2006, is organized around conceptual dualisms common to the Western tradition -- such as good and evil, natural and supernatural, and truth and memory -- to explore the way that those concepts are reaffirmed, blurred or rejected in other traditions. Readings are focused on primary texts in translation, among them "The Analects of Confucius," one of the foundational texts of Chinese civilization; "The Tale of Genji," a groundbreaking work of Japanese literature by a woman known as Murasaki Shikibu; and "Memoirs of Lady Hyegyong," a revealing memoir written by an aristocratic Korean court lady. These are complemented by films and hands-on demonstrations of Japanese drumming and calligraphy. 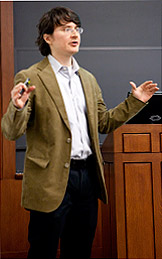 Yasar describes the class as "an intellectual adventure." With East Asia becoming so important economically, politically and culturally in the world, "a fundamental understanding of the cultural values out of which these East Asian societies arose is essential to any contemporary citizen of the modern world," he said.

Seven guest lecturers -- from the departments of East Asian studies, art and archaeology, comparative literature and religion -- speak on topics in which they specialize, offering students an opportunity to become familiar with several other faculty members who teach about East Asia. A companion course, "East Asian Humanities II: Tradition and Transformation," which carries the same themes through the 20th century, is offered in the spring.

Inspiration: The course was created to enhance students' understanding of the East Asian tradition in a manner that highlights its similarities and contrasts with Western culture. "Most of our students are educated in a Western country, and we want them to get into ways of thinking and responding to the world that may be very different from their experience with Western culture," Okada said. "We hope the course allows them to put into question some of the assumptions they carry about the world." Yasar describes the class as "an intellectual adventure." With East Asia becoming so important economically, politically and culturally in the world, "a fundamental understanding of the cultural values out of which these East Asian societies arose is essential to any contemporary citizen of the modern world," Yasar said.

From left, Okada teaches the class alongside Yasar, aided by frequent guest lecturers who speak on topics in which they specialize, offering students an opportunity to become familiar with other faculty members who teach about East Asia. Here, the professors talk before class with students Richie Huynh, Richard Jones and Asumi Shibata.

Students say: "What really drew me to this particular course was the emphasis on literature," said sophomore Daniel Velasco, who plans to major in East Asian studies. "I had never taken a course that taught history through specific literary works, so I was really excited to take this class. So far, the biggest thing I have gotten has been learning the problems that rigid binaries (such as good and evil) bring to literature and society. This course really has me thinking about the depth of the readings and how they hide so much historic meaning."

The course, said senior Richie Huynh, "gives students a very worthwhile and rewarding opportunity to delve into the major topics concerning the cultures, histories and traditions that surround East Asia. Given that the course covers such a vast geographical area with incredibly long and rich histories, our discussions and literary works cannot fully represent everything that comprises East Asia in the Western sense of humanities. Yet the course does an outstanding job of throwing us straight into the middle of some of the most important texts representative of East Asia and its colorful history." Huynh, an East Asian studies major who plans to attend medical school next year, especially likes the guest lecturers -- they are "many of Princeton's most treasured and passionate experts," he said.