Six new postdoctoral scholars have joined the Society of Fellows in the Liberal Arts this year.

The society, created in 2000 by a gift from Charter Trustee Lloyd Cotsen, is an interdisciplinary community that seeks to bring innovative approaches to scholarship and teaching at Princeton. It offers outstanding early career scholars who have recently received their Ph.D. the opportunity to enhance their teaching and research over a period of three years.

The interim director of the society for 2009-10 is Scott Burnham, the Scheide Professor of Music History. Susan Stewart, the Annan Professor of English, will serve as director for 2010-14. The society includes Princeton faculty members who serve as faculty fellows and meet regularly with the Cotsen Fellows in the Joseph Henry House for informal and formal discussions, seminars and lectures. The full complement of 15 postdoctoral fellows is drawn from a range of disciplines in the humanities, related social sciences and natural sciences. 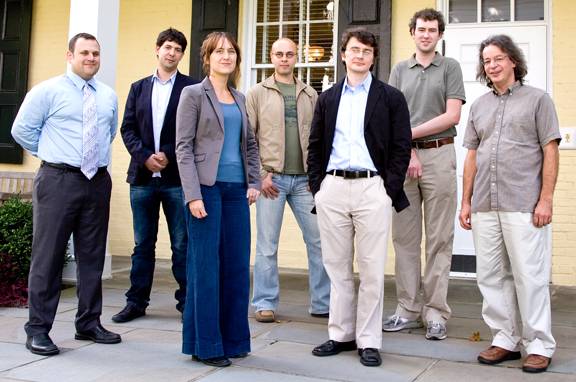 The Cotsen Fellows for 2009-12 were selected from a pool of more than 930 applicants. They teach half-time in their academic department or program or in the Council of the Humanities and pursue their own research. They are:

On Barak, a Cotsen Fellow and lecturer in history, who holds a joint Ph.D. in history and Middle Eastern and Islamic studies from New York University. He will teach courses in the history department, including a seminar on modernity and its critics in the modern Middle East. He also will launch a new research project on energy and empire.

Cullen Blake, an NSF-Cotsen Fellow in astrophysical sciences, who earned his Ph.D. in astronomy at Harvard University. Blake will search for extrasolar planets, teach undergraduate astronomy courses and work to establish a nationwide program to match talented high school students who are hoping to become involved in scientific research with young scientists who will act as their mentors.

Russ Leo, a Perkins-Cotsen Fellow and a lecturer in English, who holds a Ph.D. in literature from Duke University. This fall, he will teach a freshman seminar on witchcraft, belief and agency in early modern literature. In the spring, he will join the faculty team teaching the second part of a humanistic studies course that explores interdisciplinary approaches to Western culture since the Renaissance. Leo also will begin developing his dissertation into a book, tentatively titled "Enlightenment From Below: Milton, Spinoza and the Resources of Revolution."

Nikolaos Panou, a Hellenic-Cotsen Fellow and lecturer in comparative literature, who received a Ph.D. in comparative literature from Harvard University. In 2008-09, he was a postdoctoral fellow in Princeton's Program in Hellenic Studies. With the Society of Fellows, he will conduct an extensive study of the Phanariot Enlightenment and the processes of modernization it introduced to the Ottoman Empire. Panou also will teach a comparative course on textual representations of sovereignty in Abbasid Persia, Byzantium and Western Europe.

Hester Schadee, a Haarlow-Perkins-Cotsen Fellow and lecturer in history, who earned a D.Phil. in history from the University of Oxford. Schadee will coordinate and participate in team-teaching the yearlong humanistic studies course sequence that offers interdisciplinary approaches to the intellectual and cultural history of Europe. Her research will include an examination of the exploitation of figures drawn from history, legend and myth as exemplars in Renaissance Italy.

Kerim Yasar, an East Asian-Cotsen Fellow and lecturer in East Asian studies, who holds a Ph.D. in East Asian languages and cultures from Columbia University. He will join the faculty team teaching the yearlong interdisciplinary sequence, "East Asian Humanities." He also will revise his dissertation, which explores the roles played by technologies of communication and reproduction in the discursive, aesthetic and ideological practices of post-Meiji Restoration Japan.

More information on the new fellows can be found online.