by the Society of Fellows in the Liberal Arts

Five new postdoctoral scholars have joined the Society of Fellows in the Liberal Arts this year.

The society, created in 2000 by a gift from Charter Trustee Lloyd Cotsen, is an interdisciplinary community that seeks to bring innovative approaches to scholarship and education at Princeton. It offers outstanding young scholars who have recently received the Ph.D. the opportunity to enhance their teaching and research over a period of three years.

The Society of Fellows is directed by Susan Stewart, the Avalon Foundation University Professor in the Humanities, professor of English and an associated faculty member of the Department of Art and Archaeology.

The Cotsen and faculty fellows meet regularly in the Joseph Henry House for informal and formal discussion, seminars and lectures. The full complement of 12 postdoctoral fellows is drawn from a range of disciplines in the humanities, related social sciences and natural sciences. 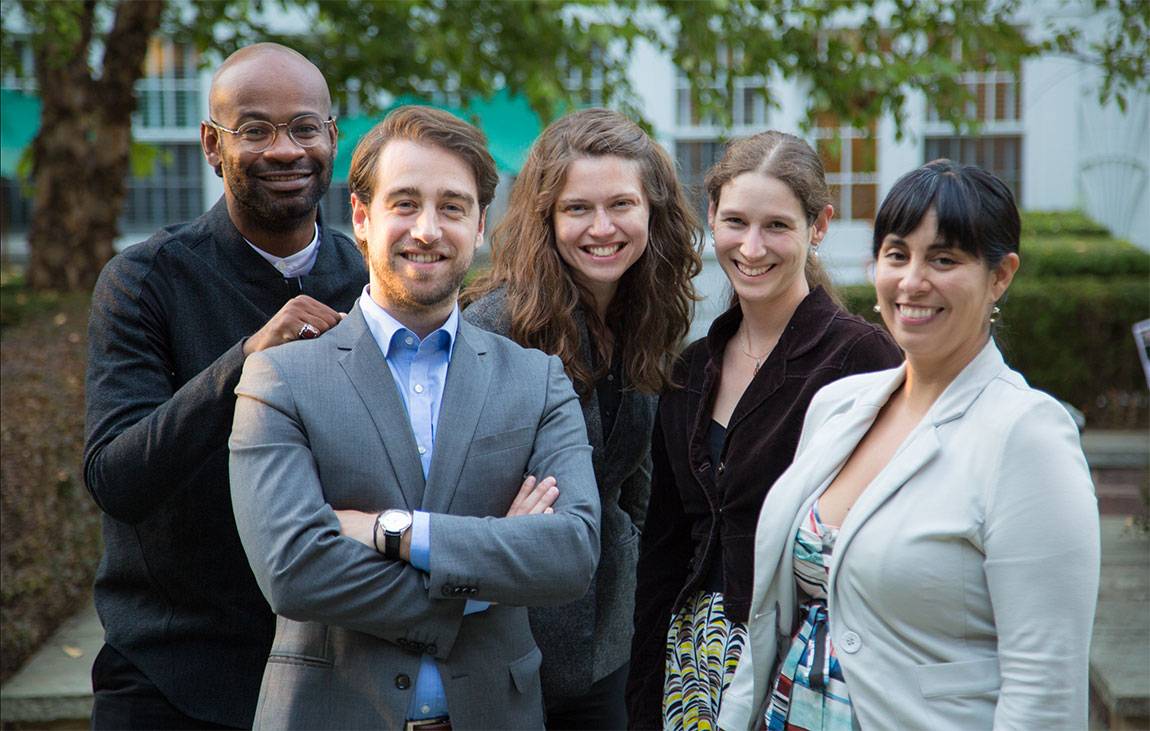 The Cotsen Fellows for 2016-19 were selected from a pool of more than 650 applicants in 18 disciplines. They are appointed in the Council of the Humanities and teach half-time in their academic department or in the Program in Humanistic Studies while pursuing their own research. They are:

• Nijah Cunningham, who received his Ph.D. in English and comparative literature from Columbia University. He specializes in African American and African diasporic literature and his fields of interest include black studies, performance studies, visual culture, gender and sexuality, and postcolonial criticism. At Princeton, he will offer courses on black aesthetics, history and catastrophe, and fictions of black urban life. In addition to being affiliated with the Department of African American Studies and the Department of English, he will serve as a faculty fellow at Mathey College.
• Stefan Eich, whose research and teaching interests are rooted in political theory and the history of political thought, in particular their relation to the politics of the economy. He received his Ph.D. in political science from Yale University and holds an M.Phil. in political thought and intellectual history from the University of Cambridge. At Princeton, Eich will be affiliated with the Department of Politics, where he will offer seminars on the politics of money and lecture on the history of political thought. He also will teach in the yearlong team-taught course, "Interdisciplinary Approaches to Western Culture" (HUM 216-219), also known as the Humanities Sequence, and will serve as a faculty fellow at Whitman College.
• Grace Helton, who holds a Ph.D. in philosophy from New York University. Her research explores questions at the boundary of philosophy and psychology. In her doctoral dissertation, she drew on both empirical and theoretical considerations to develop an account of the differences between perception and cognition. Relying on this account, she further argued that we sometimes visually perceive the intentions of others. At Princeton, she will be affiliated with the Department of Philosophy and the Program in Cognitive Science and this fall is teaching "Introduction to Philosophy of Cognitive Science." She also serves as a faculty fellow at Butler College.
• Monica Huerta, who received her Ph.D. in English from the University of California-Berkeley, and holds a master's in history from Princeton. Her research focuses on notions of expression and its relationship to identity in literature, law and science, especially as they revolve around photography and involuntariness in the 19th-century study and representations of emotional expression. As a fellow she will continue work on her first book, "The Evidence of Things Unseen: Involuntary Expressions and the Making of Modern Personhood." In addition to being affiliated with the English department, she will serve as a faculty fellow at Wilson College. This fall she is teaching "We Out Here: An Introduction to Latino Literature," which focuses on the transnational, multiracial networks that influence the works of literature termed "Latino."
• Chloë Kitzinger, who completed her Ph.D. in Slavic languages and literatures at the University of California-Berkeley. Her research and teaching interests center on the Russian and European novel, literary theory, and intersections between philosophy and literature. Her dissertation, "Illusion and Instrument: Problems of Mimetic Characterization in Dostoevsky and Tolstoy," offers an account of the creation of lifelike novelistic characters, based on close readings of three Russian realist novels. At Princeton she will teach courses cross-listed in the Department of Slavic Languages and Literatures, and the Program in Humanistic Studies, and lecture in the spring semester of the yearlong, team-taught "Interdisciplinary Approaches to Western Culture" humanities course.  She will serve as a faculty fellow at Rockefeller College.