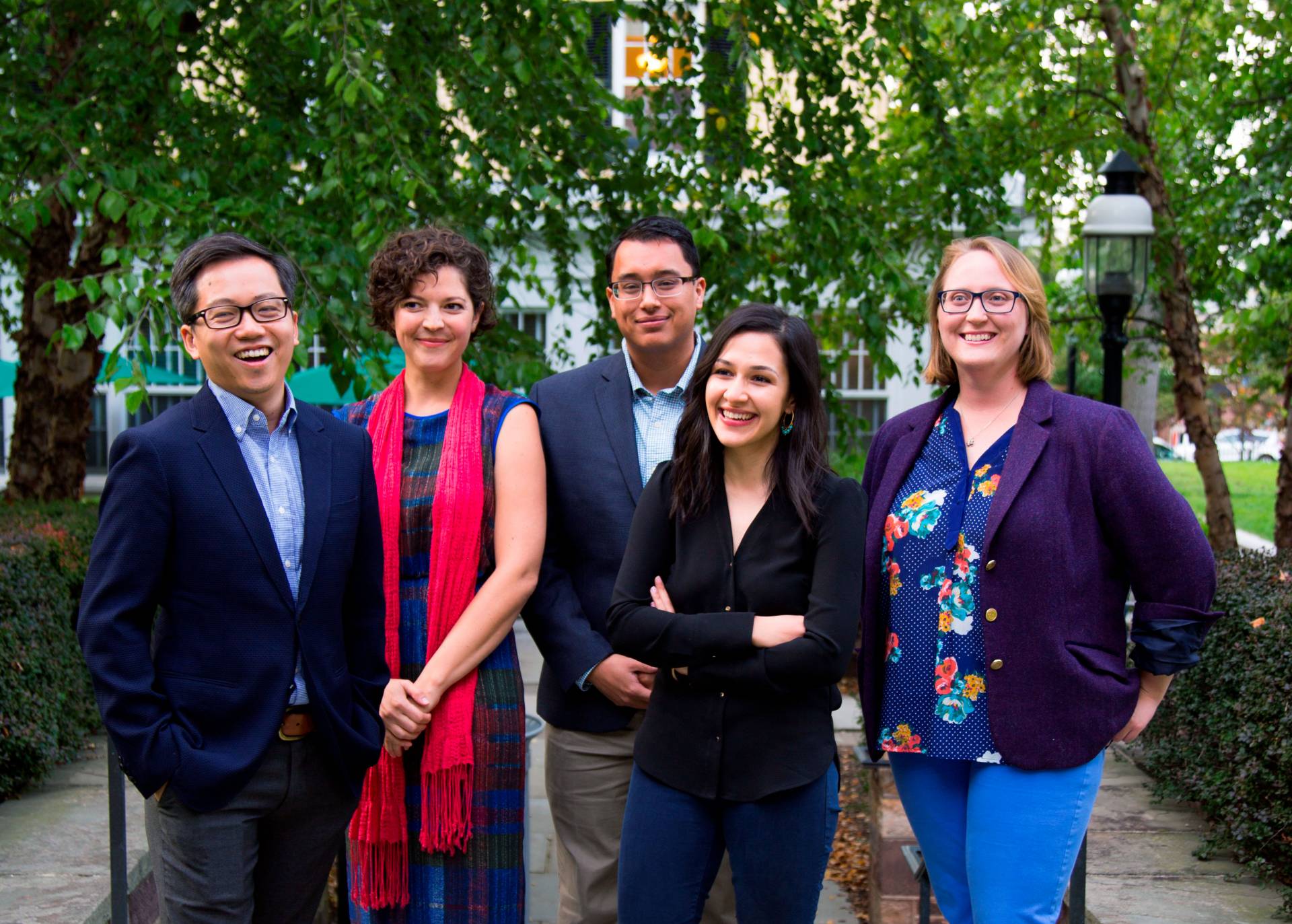 by the Society of Fellows in the Liberal Arts

From left: Guangchen Chen, Bernadette Pérez, Justin Perez, Ava Shirazi and Janet Kay have joined the Society of Fellows in the Liberal Arts this year.

Five new postdoctoral scholars joined the Society of Fellows in the Liberal Arts this academic year.

The society, initiated by a gift from Charter Trustee Lloyd Cotsen under the leadership of the Council of the Humanities in 1999, is an interdisciplinary community of postdoctoral fellows and Princeton faculty members that seeks to bring innovative approaches to scholarship and teaching. It offers outstanding young scholars with a recent Ph.D. the opportunity to enhance their teaching and research over three years.

The Society of Fellows is directed by Michael Gordin, the Rosengarten Professor of Modern and Contemporary History. The full cohort of 13 Cotsen postdoctoral fellows is drawn from a wide range of disciplines in the humanities and humanities-related social and natural sciences. They are appointed in the Council of the Humanities and teach half-time in their chosen academic home department or the Program in Humanistic Studies while pursuing their own research projects. The postdoctoral and faculty fellows affiliated with the society meet regularly in the Joseph Henry House for informal discussion, seminars and lectures.

The five new Cotsen Fellows for 2017-20 were selected from a pool of close to 800 applicants in 19 disciplines.

The new fellows are:

Guangchen Chen, who received his Ph.D. in comparative literature, with a secondary field in music, from Harvard University. He has an M.A. in comparative and world literature from Peking University. During his time at Princeton, Chen plans to complete his book investigating the interplay between intellectual innovations and the collecting of ancient artifacts in 20th-century China. Chen’s research interests include modern Chinese literature, intellectual history, the phenomenology of music and the politics of aesthetics. This fall, he is teaching “On Collecting: Anatomy of an Obsession.” He serves as a faculty fellow at Rockefeller College, one of Princeton's six residential colleges.

Janet Kay holds a Ph.D. in history from Boston College. Her fellowship is supported by the Committee for the Study of Late Antiquity, and she is affiliated with the history department and the Program in Medieval Studies. Kay’s interdisciplinary work uses archaeological methods and data to study the history of early medieval Britain. In her research, she combines material evidence and textual sources to study the past, and her current book project focuses on burial practices in 5th century post-Roman Britain. This fall, she is leading precepts for “Civilization of the Early Middle Ages,” taught by Professor of History Helmut Reimitz. She plans to teach a course on the Viking age in the spring. Kay serves as a faculty fellow at Mathey College.

Bernadette Pérez, the Cotsen Fellow in Race and Ethnicity Studies, received an M.A. in Latin American studies from the University of California-Berkeley and her Ph.D. in history from the University of Minnesota-Twin Cities. She is a historian of race, labor, the environment, migration and empire in the United States, with a particular focus on the histories of Mexican, Mexican American and American Indian people. Her current project uses the history of the sugar beet industry in Colorado to tell a story about land, power and resistance in the post-Civil War United States. This fall, she is teaching a course on the history of sugar, and in the spring, a freshman seminar on “Land and Power.” Pérez is a faculty fellow at Forbes College.

Justin Perez is a cultural anthropologist who studies sexual rights and global health in Latin America through queer and political anthropological approaches. He received his Ph.D. in anthropology from the University of California-Irvine. His current project, based on 15 months of ethnographic fieldwork among gay and transgender communities in the Upper Amazonian region of Peru, examines the effects of rights-based HIV/AIDS initiatives and the social afterlife of these initiatives after they were defunded. During the 2017-18 academic year, he will teach “Introduction to Global LGBTQ Studies” and “Queer Ethnography.” Perez holds the Fund For Reunion-Cotsen Fellowship in LGBT Studies, and he serves as a faculty fellow in Wilson College.

Ava Shirazi received her Ph.D. in classics from Stanford University and holds a B.A. in classics and English from the University of Toronto. Her research brings together ancient Greek literature, philosophy and material culture, with a focus on topics of aesthetics, sensory perception, and the correlation between objects and concepts in cultural experience. These issues have motivated her book project, “The Mirror and the Senses: Reflection and Perception in Classical Greek Thought.” Shirazi is affiliated with the Department of Classics, is co-teaching the course “Interdisciplinary Approaches to Western Culture” in the humanities sequence, and intends to offer an interdisciplinary course on the history of vision(s) in the spring. She is a faculty fellow at Mathey College.