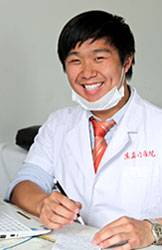 For his senior thesis, Richie Huynh, an East Asian studies major, traveled throughout China and Taiwan to observe how traditional Chinese medicine -- specifically acupuncture -- has been combined with modern medicine and how both are being used in concert.

The cultural and academic combinations that have defined Richie Huynh's experiences at Princeton inspired a senior thesis project that took him across the globe.

Huynh, an East Asian studies major, traveled to Beijing, Shanghai, Hong Kong and other locations throughout China and Taiwan to observe how traditional Chinese medicine -- specifically acupuncture -- has been combined with modern medicine and how both are being used in concert.

"Some people in the West look at traditional Chinese medicine as hocus pocus," he said. "But acupuncture comes the closest to bridging the gap between traditional and modern medicine.

"Of all traditional Chinese medicine, acupuncture has the most research done on it from a modern point of view, even down to the neurochemistry of it. That's where my thesis comes from. I want to look at it from a scientific point of view." 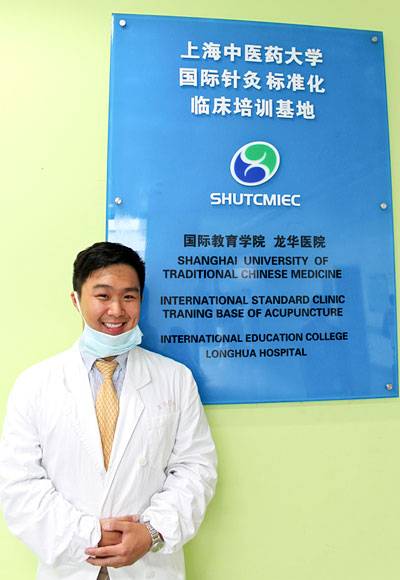 The inspiration for Huynh's thesis topic developed during time he spent two summers ago in the Princeton-in-Beijing program, an intensive language training program. While there, he met Mark Jia, a member of Princeton's class of 2010. Jia, whose studies were concentrated in Princeton's Woodrow Wilson School of Public and International Affairs, was traveling throughout the country to research his own senior thesis on legal aid and the rule of law in China.

Motivated to pursue research in the field as well, Huynh traveled to China and Taiwan to observe how traditional and modern medicine are practiced. Over the course of five weeks, he spent 200 hours in 15 hospitals and learned about numerous specialized medical practices. He spent time both in high-end hospitals and with local shamans. 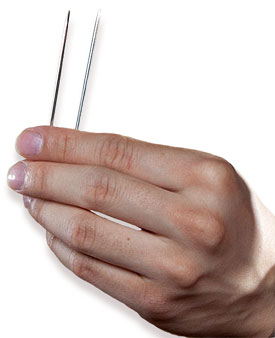 Huynh says he learned that the use of acupuncture has mixed with modern science to help refine the practice and make it more effective. (Photo by Brian Wilson)

His overarching goal was to observe how acupuncture is or is not integrated into modern practices in each of these places. Huynh's exploration of the medical procedures of numerous Chinese communities provides important insights, according to his adviser, Benjamin Elman, Princeton's Gordon Wu '58 Professor of Chinese Studies and chair of the Department of East Asian Studies.

"Richie is looking at acupuncture in terms of discrete Chinese communities in Asia," Elman said. "It's interesting to see how some of these things work. In some places, the medical scene is open to traditional practices, in others more modern medicine is dominant. Overall, the traditional has to compete with the modern directly."

Elman pointed out that Huynh's interest in medicine and science has helped him bring perspective to his senior thesis.

"With acupuncture, there has been mapping of the body's traditional entry points for the needles on the modern nervous system, as well as advances in types of noninvasive needles used," Elman noted. "These are modern influences showing how even the traditional isn't so traditional. It's more of a hybrid."

While Huyhn's time in Beijing ultimately inspired his thesis, what first led him there was unexpected. Huynh's initial interest in Asia and the path to his thesis research was shaped in -- of all places -- dance studios on Princeton's campus, where he gained new insights into Asian cultures.

Huynh's parents came to the United States from Vietnam. His father came first, shortly after marriage, followed by his mother a few years later. Richie and his twin brother Ryan, who is a senior at Princeton majoring in ecology and environmental biology, grew up in Brooklyn Park, Minn.

Richie Huynh learned about Princeton at a science fair during his junior year of high school.

"I met international students from Princeton, and I didn't even know what it was," Huynh said. "Meeting these students shifted my world." 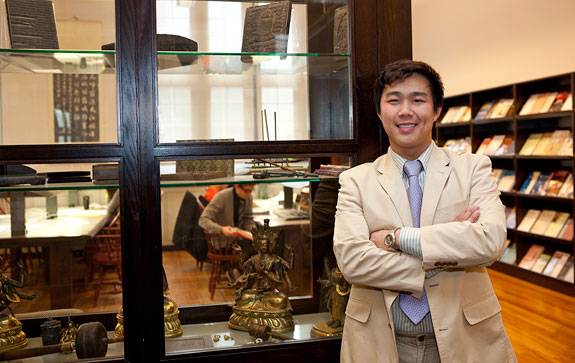 Of Vietnamese heritage, Huynh's interest in Asian cultures has blossomed at Princeton, both through academic work and extracurricular activities. (Photo by Brian Wilson)

When Huynh came to Princeton, he began connecting with students from many backgrounds and joined a campus dance group called Triple 8, which showcases the art and dance of traditional and contemporary East Asia . That experience sparked an interest in Chinese culture, leading Huynh to participate in Princeton-in-Beijing. He also began to draw connections between his own heritage and Chinese culture.

"I have a lot of Chinese friends because of dance," he said. "I learned to speak Chinese fluently. It changed me. I feel this connection with my American roots, but also with my Vietnamese heritage and the Chinese culture."

Huynh uses these cultural overlays to inspire his artistry. "In my dance and compositions, I like doing fusions," he said. "My pieces are always a collaboration of different music and dance styles, including lyrical, hip-hop and martial arts." 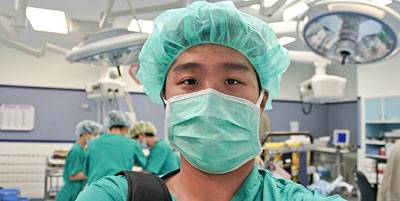 Huynh hopes to become a doctor and to keep building on his connections to Asia. He says that his experiences as a Princeton student and his work for his senior thesis will allow him to bring diverse viewpoints to his medical studies. (Photo courtesy of Richie Huynh)

For Huynh, who plans to go to medical school and originally intended to major in chemistry, this fusion carried into his academic work -- leading him to East Asian studies and to his senior thesis.

"I wanted to combine my interest in medicine with East Asian studies," he said. "It was a chance to major in something out of the normal and apply it to my interests."

Huynh hopes to become a doctor in the United States and hopes to gain professional experience in Asia someday. Through his senior thesis and his time at Princeton, Huynh said he will bring more diverse viewpoints to his medical studies.

"If I hadn't come to Princeton, my perspective would be so different," he said. "I always wanted to be a doctor, and now I bring a different set of ideas and thoughts to this goal."