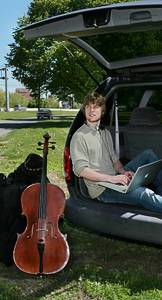 Senior Daniel Hawkins, winner of the 2007 Martin Dale Fellowship, will use the award to support his travels in search of musical inspiration. For his Dale project, titled "Road Songs: An American Sound Story," Hawkins will traverse the country's highways in a van over the next year, exploring various musical traditions and recording unique sounds he hears along the way. (Photo: Denise Applewhite)

Sophomores win Dale Summer Awards Seven sophomores are winners of this year's Dale Summer Awards, which provide a $4,000 stipend to pursue a summer project not connected to their academic coursework. The recipients and the titles of their projects are: • Andy Chen, "Om Shanti: Yogic Spirituality in India." • Ana De Roo, "Uniting Science and Art With Digital Restoration." • Christian Harris, "Short Film Production." • Gabriel Kreindler, "Portraits of Personal Stories." • Fiona Miller, "Between Family and History: The Illumination of the Life and Work of Earl Miller and the Spiral Group." • Diana Negoescu, "Analyzing Progress: Drawing the Pristine Landscapes of Cézanne." • Peter Schram, "A Journey Into the American Exodus: An Artistic Exploration of the Great Migration."

From the hum of a massive incinerator in Harrisburg, Pa., to the tonal distinctions of Chinese languages, Daniel Hawkins has found musical inspiration in atypical places. Now the Princeton senior plans to spend the next year traversing America's highways, taking his search for muses onto the open road.

Hawkins, a cellist and music major, will be supported in his travels by the Martin Dale Fellowship. The $27,500 prize is awarded annually to allow a graduating senior "to devote the year following graduation to an independent project of extraordinary merit that will widen the recipient's experience of the world and significantly enhance his or her personal growth and intellectual development."

Hawkins' project, titled "Road Songs: An American Sound Story," will focus on what he calls "overlooked American communities and the highways that connect them." He will spend the next year exploring areas where different people and traditions have come together to produce unique, original music. A major element of his project will be to record ambient noise that he encounters on the road, which he will use as inspiration for his own compositions or incorporate directly into his own works.

While traveling and living in a van, Hawkins will bring along a specially designed travel cello, which can be easily disassembled, as well as other instruments and recording equipment. His experiences will be chronicled in a blog at www.roadsongs.blogspot.com.

After graduating from Princeton, where he also is pursuing certificates in music performance and African studies, Hawkins plans to live in and help restore an old house in Harrisburg with friends this summer. He will start his Dale journey with a pair of weeklong excursions: attending the Mark O'Connor Fiddle Camp in Burns, Tenn., which attracts fiddlers from around the world; and visiting the Black Hills Reservation in Wounded Knee, S.D., where he will study Native American heritage and musical traditions.

These trips will prepare Hawkins for the rest of his travels. He will research other possible destinations, but ultimately wants the project "to be very organic and very spontaneous," not bound by any itinerary. "I would like to make it up to Alaska, and there are other spots I would like to get to, but I don't want to try to set up rules for myself," he said.

Citing a key lesson from one of his music professors, Steve Mackey, Hawkins said, "You don't want to let the idea of a project dictate where the music goes. … It's going to be about taking sounds, listening to them really carefully and hearing what music those sounds want to become," he said.

Mackey said the trip "sounds like a blast. He is a lucky young man to have this opportunity. … Dan is the kind of guy who is going to take full advantage of it. From what I know of him studying with me, this is not going to be an idle road trip."

For Hawkins, the Dale project is an extension of his experiences in finding musical influences in a variety of surroundings. He grew up in Hershey, Pa., where he began playing the cello in fifth grade, and attended high school at the Harrisburg Academy. In his 20-minute commute, he drove past Harrisburg's massive, aging trash incinerator and could hear its ominous hum from the highway. He also passed the deserted Campbelltown, Pa., firehouse, which had been converted into a live music venue where Hawkins played bass and sang in a bluegrass band with other amateur musicians. The sounds of both locations loomed large in Hawkins' musical development and his understanding of his hometown region's culture and history.

While at Princeton, Hawkins traveled twice to Ghana to study its cultural and musical traditions. He also spent last summer in China as part of Summer of Service, an English immersion program for Chinese college students run by Princeton undergraduates. In both countries he made recordings of ambient noises in the areas he visited, and in China he studied the tonal music of the country's languages.

The musical inspiration he gained abroad, as well as the practical experience of recording sounds in a range of settings, "have definitely shaped how I'm going to go about recording next year," Hawkins said.

Hawkins also has benefited from his work with Mackey, Paul Lansky and other Princeton music faculty in developing his compositions skills. Mackey said that while Hawkins is a talented cellist, he did not have much experience writing music when he took Mackey's course on contemporary composition and performance last spring.

"I think he has incredible persistence and willingness to learn," Mackey said. "He developed a sense of how to make a piece work and speak to an audience. He revealed himself by the end to have a lot of creative compositional talent."

Lansky is advising Hawkins' senior thesis, a compilation of several compositions. "He's coming from a background as a performer, and he's using that very well to experiment in different kinds of ways to make music," Lansky said. "He's not simply writing scores for other people to play, he's composing music on his cello. It's very imaginative, and it's quite good."

Hawkins, who also is a self-taught guitarist, noted that a myriad of influences are found in his own work, including the music of Mackey, Lansky, Bruce Springsteen, Johnny Cash and classical bassist Edgar Meyer, as well as Ghanaian percussion and Japanese shakuhachi (traditional bamboo flute) styles.

After completing his Dale project, Hawkins may pursue a fellowship with Princeton in Asia or Princeton in Africa, or take time to work on his cello performance or his composition portfolio, before considering options for graduate school. But for the next year, he will be focused on a journey that is several years in the making.

"In middle school, I had a plan to simply walk out the doors of my school with a guitar one day and jump on a nearby train line and just take off," Hawkins said. "The details were a little hazy after that, but they certainly included music, maturing, girls and finding America. It's taken me a little longer than expected, but now I finally have a chance to go."