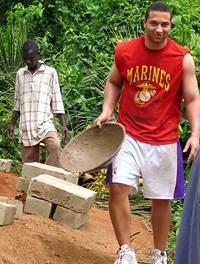 During a trip to Ghana this summer, Princeton students helped to lay a foundation for a library in the village of Obodakaba. Here, junior Chris Chaney pitched in on the job.

During a trip to Ghana this summer, Princeton students helped to lay a foundation for a library in the village of Obodakaba. Here, junior Chris Chaney pitched in on the job.

Below left: In addition to laying a library foundation, Princeton students helped to install a water treatment unit in the village. The students and residents gathered for a photo before beginning the projects. 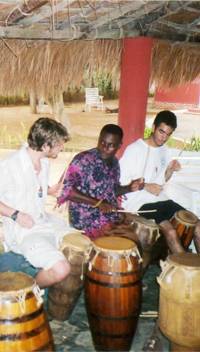 The students also participated in drumming and dancing ceremonies among members of the Asante, Ga and Ewe tribes. Here, junior Daniel Hawkins (left) and sophomore Kit Tollerson (right) worked with a drummer at the Dagbe Cultural Centre in the Ewe village of Kopeyia.

The students also participated in drumming and dancing ceremonies among members of the Asante, Ga and Ewe tribes. Here, junior Daniel Hawkins (left) and sophomore Kit Tollerson (right) worked with a drummer at the Dagbe Cultural Centre in the Ewe village of Kopeyia.

For a group of Princeton undergraduates, a trip to Ghana over the summer has not really ended, even though the students are back on campus. This fall, the 11 students are continuing to explore what they learned, and are sharing their experiences with the wider University community through various cultural programs.

Sponsored by the Fields Center, the three-week trip focused on engaging with the diverse cultures of the West African nation through music, dance, religion and history. It was the first visit to Africa for all of the students. According to Makeba Clay, the director of the Fields Center who led the trip, the goal was to "create opportunities for students to immerse themselves in a completely different environment."

Clay, who has visited Ghana several times over the past decade, explained that the idea for the trip grew out of conversations with faculty members as well as students involved in Akwaaba, the African student organization at Princeton. Professor Kofi Agawu, who teaches music and African studies and is Ghanaian, served as the faculty adviser. The students, who have a range of academic interests but a unifying curiosity in matters relating to Africa, were selected through an application process.

Also along on the trip was Kelly Sortino, a member of the class of 2003 and an admission officer at Princeton. Having visited the East African nation of Kenya, Sortino said she also wanted to learn about West Africa. She also had professional reasons for the trip — she is responsible for evaluating applicants to the University from Africa.

The trip started with a tour of Accra, the capital of Ghana, and spanned the entire country. Highlights included participating in drumming and dancing ceremonies with different tribes, attending university lectures, visiting cultural and historical sites, joining a traditional Ashanti funeral ceremony and cooperating on volunteer projects at a small fishing village.

Clay said that the students were successful in "breaking out of their group mentality and diving right into the lives of the Ghanaian people." She said that in many ways the experience was a "humbling one," in which the Princeton visitors regularly encountered "overwhelming poverty alongside overwhelming hospitality."

Reporting back after the trip, the students marveled at the range of activities they pursued, and how their deepened cultural awareness now is illuminating their studies and even their career goals.

Christina Postolowski, a junior from Denver, is bringing her new knowledge to bear on her junior seminar, "The Black Atlantic World: Black Encounters with Europe, Asia and the Americas," taught by Assistant Professor of History Sarah-Jane Mathieu. A history major who is working on a certificate in African studies, she also intends to write a junior paper informed by the Ghana trip.

For Postolowski, a particular highlight was visiting the castles that once were used as slave dungeons in the transatlantic slave trade. This semester, she and some of her fellow travelers will give a presentation about the trip to Princeton faculty, staff and students at the African studies program's weekly morning meeting (known as the "Indaba").

Overall, the students found volunteering at the village of Obodakaba to be a particularly memorable experience. The village already had been "adopted" by the Fields Center, which annually runs a book and clothing drive to benefit residents. For the Princeton group, the visit to Obodakaba brought the opportunity to work on collective, hands-on projects in helping to install a water treatment unit and lay a foundation for a library. "Our visit to the village opened my eyes to both the great need and the great spirit of people living in poverty in West Africa," said Postolowski. 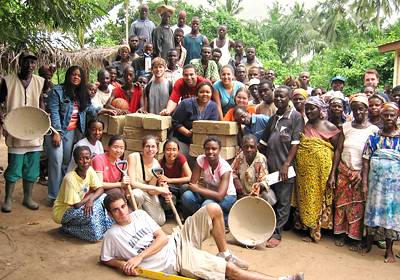 For junior Daniel Hawkins, who is from Harrisburg, Pa., the dichotomy in the world between the haves and the have-nots was put into especially sharp focus by the visit to Obodakaba. He explained that the power to help in such a small way, and to be "treated as heroes," made him even more aware of how much more help was needed. In recognizing this, Hawkins said he "left the village knowing my life had become a lot harder." A music major who will write a "three-movement piece for a small, unconventional ensemble based on the Akan dance forms of Ghana," Hawkins said he now also will spend his remaining time at Princeton learning about international development and humanitarian law.

The opportunity to explore differences and similarities between cultures was central to the trip, and afforded countless observations. Senior Ayana Maurice, a history major native to Trinidad, said that she was "surprised at how much anything from the United States was prized." After she graduates, Maurice plans to return to Africa with the Peace Corps.

Sophomore Michael Scharff, who hails from Far Hills, N.J., and is interested in politics and public policy, was taken aback by the "thousands of people lining up at the American embassy to try and get visas to the United States" — a country he said was known largely through "images in movies or photos in magazines." Scharff also was struck by the deep connections between members of communities in Ghana, and by the way the Princeton visitors were unfailingly welcomed.

As an international student from Kuala Lumpur, Malaysia, sophomore Rina Ayob experienced the trip through yet another lens of perception than her American counterparts. "Being an international student amidst a group of mostly American students made me acutely aware of the extent to which cultural background shapes perceptions of other cultures," said Ayob, whose academic focus is religion and psychology. "The instinct to appropriate what we see in another culture to something familiar in our own culture can be extremely misleading."

While in Ghana, the students took classes with faculty members at the University of Ghana and Ashesi University on topics such as the slave trade, religion, music and education. Sophomore and New York native Kit Tollerson was particularly engaged in learning about the higher education system in Ghana, especially new endeavors in developing multidisciplinary, liberal education at Ashesi University, which was founded by a Ghanaian who studied in the United States.

Certainly some of the liveliest activities of the trip were the drumming and dancing events. "Jumping around in hot, humid weather was hard," said Maurice, "but when we started doing it, it really felt like an accomplishment." This semester, members of the Princeton community are invited to learn more about West African dance and music in weekly classes hosted by the Fields Center (see sidebar).

With the success of the Ghana trip, Clay is investigating new destinations for cultural immersion programs. One possibility is a spring break trip to the Caribbean; another is a program at a Native American reservation.