Makeba Clay, director of the Fields Center for Equality and Cultural Understanding, oversees efforts to build community among students, faculty and colleagues on and off campus. Photo: John Jameson

Makeba Clay's mission as director of the Fields Center for Equality and Cultural Understanding is to foster an inclusive environment for campus community members from all backgrounds. Her community-building efforts, however, extend far beyond the center's confines.

While working to enhance the Fields Center's programming and overseeing its move into a new location, Clay also has marshaled endeavors to support students, faculty and colleagues from Princeton and other institutions through initiatives on campus and abroad. This past fall, she organized a national conference at Princeton for the Association of Black Women in Higher Education (ABWHE) and helped to coordinate a workshop in South Africa bringing together women in higher education in that country with peers from the United States. This summer, she is co-directing a seminar in Ghana on sustainable design that will allow Princeton students to study with international scholars and engage with local citizens.

"She is a natural connector," said Judith White, a 1972 Princeton graduate and president and executive director of Higher Educational Resource Services (HERS), a professional development organization for women in higher education that sponsored the South Africa workshop. "She sees possibilities everywhere for interacting and reaching beyond our usual paths."

Clay came to Princeton in 2003 to lead the Fields Center, which sponsors training and educational programs, service projects and experiential learning opportunities intended to increase knowledge and respect across lines of race, religion, culture and political ideology. The center collaborates with campus partners such as the Davis International Center, Women's Center, and Lesbian, Gay, Bisexual and Transgender Center; affinity-based student groups such as the Black Student Union, Latino Coalition and Asian American Students Association; the residential colleges; the Office of Religious Life; and academic units across disciplines.

Clay is excited about the relocation this summer of the Fields Center -- along with Community House -- to the site of the former Elm Club at 58 Prospect Ave. The new facility will offer a significant upgrade in space available for the center and its many associated organizations, while presenting an opportunity to raise its visibility as a hub of social and intellectual activities for students from all backgrounds.

"We're trying to reach a broader audience. If social justice, equity and cultural understanding matter to you, then this is a place for you regardless of your race, your philosophical views or your religious ideology," she said.

Clay recalled walking through the existing Fields Center location on Olden Street one evening this year when "every single room in the center was filled and something distinctly different was going on in each part of the center -- in one room there was a group drumming and doing capoeira, in other room there was a tutoring session. We want to continue that level of engagement and energy in the new space," she said. "Our goal is to offer a diverse range of programming to a broad constituency. And we want to reach the internal as well as the surrounding community with the things we do." 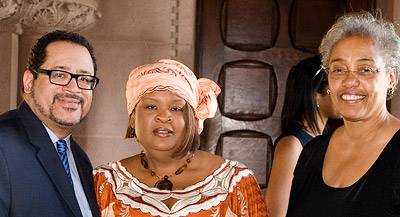 Clay visited with Michael Eric Dyson, a Princeton graduate alumnus and prominent sociologist, and Princeton Vice President for Campus Life Janet Dickerson before the recent Pan-African Graduation ceremony. The annual event, which celebrates the achievements of graduates from the African diaspora, is among many initiatives sponsored by the Fields Center. (Photo: Brian Wilson)

Clay has been working with students, faculty, staff and alumni on plans to reshape the center, with the aim of creating a national model for collegiate multicultural centers by focusing on the core principles of the center: empowerment, understanding, leadership and social justice.

"I think it's a great time for the center to be positioned to move and to be reborn," she said. "I'm glad to be at the helm at this critical time."

Reginald Galloway, who heads the center's student advisory board that is helping to guide the transition into the new facility, said working with Clay "has been an amazing experience for me."

In addition to his work on the advisory board, Galloway, a member of the class of 2011, has participated in the Black Student Union's Leadership and Mentoring Program, which is advised by the Fields Center.

"Makeba is the type of leader who will put everything into perspective in terms of how the campus is operated and what our mission is, and she thinks of new and innovative ways to enhance our mission," he said.

Noting that Clay is pursuing her Ph.D. in educational policy with a focus on internationalization of higher education at Seton Hall University, Galloway added, "Working with someone who operates the center and on top of that is working to better herself, it's just a great example."

Beyond the Fields Center

In addition to overseeing activities on campus, Clay has created opportunities for Princeton students to travel and learn in Ghana, a country that holds a special place in her life.

Clay, a graduate of the State University of New York at Albany, received her master's degree in higher education administration from Bowling Green State University in 1995. That summer, on a whim, she took her first trip to Ghana to learn more about the country's culture and traditions, and wound up meeting her husband, Nathaniel Barnor. A decade later, after several additional visits, she took 11 Princeton students on their first trip to Ghana, a three-week excursion focused on engaging with the diverse cultures of the West African nation through music, dance, religion and history.

Clay will return to Ghana with students this summer as co-director of a Princeton Global Seminar sponsored by the Princeton Institute for International and Regional Studies and the Office of International Programs. Clay and Wole Soboyejo, a professor of mechanical and aerospace engineering, designed the six-week seminar, titled "Sustainable Design: Creating New Solutions for Global Development," which runs through July 24.

The seminar will feature lectures and hands-on activities led by scholars and design practitioners from the United States and Ghana. Participants also will interact with Ghanaian citizens in informal gatherings and traditional ceremonies, engage in community service projects and undertake daily language study. The 15 Princeton students will participate alongside peers from the Kwame Nkrumah University of Science and Technology in Ghana. Clay plans to incorporate student work from the seminar into an exhibition on sustainable design planned for the grand opening of the new Fields Center facility in September. 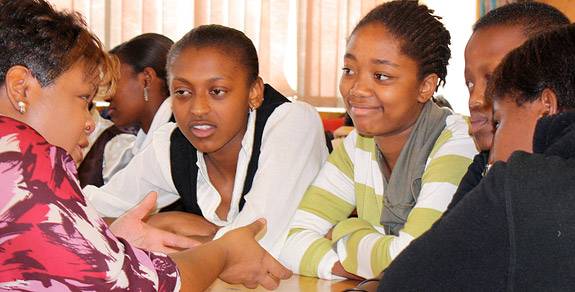 This past fall Clay met with students from a girls' high school in Soweto, South Africa. The visit came as part of a trip that she helped to organize in her role as president of the Association of Black Women in Higher Education, bringing female administrators from U.S. colleges and universities together with South African colleagues for a professional development workshop. (Photo: Courtesy of Makeba Clay)

The seminar will mark Clay's second trip to Africa this year. In her role as president of the ABWHE advocacy group, in September she helped lead a delegation of female administrators from U.S. colleges and universities to the HERS SA Academy, a professional development workshop at the University of Cape Town in South Africa.

"We learned that women in South Africa felt overshadowed, overlooked and underpromoted," Clay said. "Those dynamics look similar in the United States, but we got a sense that it was even worse in Africa. We were able to share parallels and some of our own strategies. They were interested in knowing how we navigate through these systems in our career track."

White, the HERS executive director, said Clay made the trip more meaningful by organizing a visit to a girls' high school in Soweto and a donation drive to bring school supplies, soccer balls, toiletries and other items to students there.

"Our going to the school made Soweto a place with real people facing huge challenges, and also a place with beautiful strong women making their contributions to a new democracy," she said. "At the same time, these are the students our colleagues at the HERS SA Academy are serving in institutions of higher education. So the trip added new dimensions to our professional connections with new colleagues there."

Clay has served since 2007 as president of ABWHE, which has thrived under her leadership -- adding three new chapters in the past year. In October, along with Princeton colleagues Melissa Lee Lyles and Deborah Blanks, Clay organized a three-day conference at the University in honor of the association's 30th anniversary.

Dickerson added that Clay has helped the organization "build its reputation and extend its scope of influence to regions (most recently the West Coast) that were underserved. She approaches such opportunities to improve organizational effectiveness with a big-picture vision, a perfectionist attentiveness to detail and expectations of elegance that enable everyone who participates in the planning process to work hard -- but then to enjoy and celebrate their achievements."

On campus, Clay has encouraged professional development and recruitment and retention of employees of color as the past president of the Princetonians of Color Network, which supports staff and faculty; as a member of the Diversity Council, which advises the University administration on diversity matters; and as a facilitator with the Office of Human Resources' Learning and Development Program.

As she looks forward to the opening of the new Fields Center home and to continuing her efforts to bring together students and colleagues, Clay said she is happy to be working for an institution that emphasizes the need to build and sustain a diverse environment.

"I am excited that the University recognizes the value of building community across our differences," she said. "We all can talk about what we uniquely bring to Princeton -- whether it's faculty, staff or students -- and how we celebrate those individual differences and learn about other people."