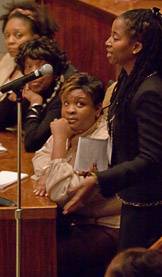 Stephanie Evans (right), an assistant professor in African American studies and women's studies at the University of Florida, asked a question during the panel discussion, "Presidential Perspectives on Leadership," at the ABWHE conference. Photos: Brian Wilson

Princeton President Shirley M. Tilghman and Bennett College for Women President Julianne Malveaux took very different paths to their current positions. However, they had similar words of advice for women interested in following in their footsteps: Envision yourselves as leaders and be aggressive in pursuing career goals.

Speaking on Friday, Oct. 10, to attendees of a conference at Princeton hosted by the Association of Black Women in Higher Education (ABWHE), Tilghman and Malveaux shared their experiences and encouragement in a panel discussion, "Presidential Perspectives on Leadership."

Asked to offer guidance to audience members -- who represented institutions from around the country -- who aspire to positions like theirs, Tilghman and Malveaux stressed tenacity in dealing with barriers that remain for women to achieve leadership roles.

Malveaux said, "You have to see yourself as a president in order to ever be one." She encouraged audience members to strengthen their professional networks through groups such as ABWHE, and to be diligent in seeking leadership training and promoting their skills.

"People will not know what you're capable of unless you tell them," Malveaux said. "You can't be shy about tooting your own horn, but you also want other people to toot your horn. You want to be well networked. You want to make sure that your sisters and others know that when things come up, people will be willing to say, 'That's a person who can do this.'"

From left, presidents Julianne Malveaux of Bennett College and Shirley Tilghman of Princeton University offered words of advice to other women interested in being leaders. Joann Mitchell, vice president for institutional affairs at the University of Pennsylvania, served as moderator.

Both presidents offered examples of how the skills they cultivated helped prepare them for their current leadership roles.

Tilghman, a pioneering molecular biologist, was a Princeton faculty member for 15 years and founding director of the University's Lewis-Sigler Institute for Integrative Genomics before assuming the presidency in 2001. She noted that both her problem-solving background as a scientist and her experience rising through the ranks in a male-dominated field aided her in becoming the first female president of a venerable Ivy League institution.

Malveaux, an economist and author, last June took the helm of Bennett College, a historically black institution in Greensboro, N.C., after gaining renown as a columnist and commentator on issues such as race, culture and gender. Her experience in academia and in the media has helped her deal with the many constituencies with whom she engages as a college president.

The discussion was moderated by Joann Mitchell, vice president for institutional affairs at the University of Pennsylvania and former vice provost for administration at Princeton. Responding to questions from Mitchell and from audience members, Tilghman and Malveaux also touched on topics such as work-life balance, their relationships with other women leaders in higher education and the need for leaders of colleges and universities to emphasize social responsibility.

Colleen Winn, a staff assistant at the African American Resource Center at Penn, said she appreciated the opportunity to hear their perspectives on leadership.

"Working in higher education there are so many difficulties that women, especially minority women, are faced with that it is really good to hear what other women who are ahead of us are doing and overcoming, and how they're able to push the ceiling," Winn said. "Sometimes we don't always have mentors right there with us, but this is a good mentoring session for women to network, hear people's stories and say, 'I'm not by myself.'"

Makeba Clay, director of Princeton's Fields Center for Equality and Cultural Understanding, is president of ABWHE, which hosted the discussion as part of a three-day conference marking the 30th anniversary of the association.

"Many of the participants want to seek either the presidency or other high-level executive positions in higher education, so for them this was an opportunity to be a fly on the wall and hear what struggles [the presidents] go through but also what opportunities they've found in their leadership as women in the academy," Clay said. "Both of them have very different stories, so that's why we wanted to juxtapose them on the panel."

Stephanie Evans, an assistant professor in African American studies and women's studies at the University of Florida, said, "I think the contrast of two different institutional types was very helpful because you could see how being a woman leader of an institution -- even though they're different types of institutions -- really had an impact of their understanding of what their job is."

In addition to attending the presidents' discussion and other conference sessions, Evans, the author of "Black Women in the Ivory Tower, 1850-1954: An Intellectual History," spoke on a panel about the history and impact of women in higher education.

"To have discussions with administrators, staff people, faculty members and graduate students from all over the country about what they're doing now helps me understand some of the themes and patterns of black women in higher education just a little bit better," Evans said of the conference. "It's been an outstanding opportunity."