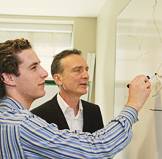 The class of 2007 valedictorian, Glen Weyl (left), nearly completed his Ph.D. in economics while still an undergraduate and has earned praise from economists at Princeton and elsewhere for his advanced research in the field. Weyl is shown here working with his senior thesis adviser, José Scheinkman, who called him "the most impressive undergraduate with whom I have ever worked in 30-plus years." (Photo: Denise Applewhite) 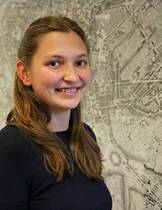 Maya Maskarinec, a classics major, has been selected as the senior class salutatorian and will present the traditional Latin address at Commencement. Read more about Maskarinec in a related story. (Photo: John Jameson)

After four years as a Princeton undergraduate, Glen Weyl is still about a year away from his degree -- his Ph.D.

Weyl has completed all of his coursework and exams for a doctorate in economics while still an undergraduate, earning a reputation as a rising star in the field. He also has garnered a remarkable collection of academic honors, capped by his selection as valedictorian of Princeton's class of 2007.

Weyl, who will deliver an address at the June 5 Commencement ceremony, is interested in microeconomic theory and the intersection between economics and other disciplines, including computer science, neuroscience, philosophy and political science. He will return to Princeton next year to complete his dissertation and plans to pursue a career as an academic economist.

"Glen is the most impressive undergraduate with whom I have ever worked in 30-plus years," said José Scheinkman, the Theodore Wells '29 Professor of Economics.

"Glen exhibits an exceptional combination of depth and breadth of knowledge in economics, but what is most impressive is his intellectual maturity -- while still an undergraduate he is working at the level of the best graduate students at the dissertation stage," Scheinkman said. "Glen is passionate about his research and, while serving as a teaching assistant for a second-year Ph.D. asset pricing course in financial economics last fall, has shown to be a dedicated teacher. Glen's accomplishments to date put him on a trajectory to become an influential researcher in economics."

Among many economists from Princeton and other institutions who have encouraged his accelerated pace in the field, Weyl cited Scheinkman as his major inspiration, recalling the professor's comments during a graduate seminar on microeconomics that Weyl took as a sophomore.

"He said that what makes a great economist is not a set of technical skills, though of course those are prerequisites. A great economist is someone who, when watching movies or hanging out at a party or reading a newspaper, sees everywhere the elegant structure of social and economic institutions," Weyl said. "To me, that exactly captured what I'd been interested in studying, and it's really the moment when I decided I wanted to pursue economics as a career.

"José recommended that I get this little book," Weyl added, pulling a weathered, pocket-sized notebook from his bag, "because to be a great economist you need to practice that art of looking at the world around you and seeing these abstract ideas in everyday life. I carry this around with me everywhere, and as things strike me that are interesting or that I could do research on -- curious, different things -- I write them down."

He said, "I owe an unbelievable debt to José. He is an incredible friend, mentor and adviser. He spent six hours with me every Monday night during the fall when I was working on my thesis research more heavily. I can't imagine where I would be without his mentorship."

Weyl was born in San Francisco, grew up in Palo Alto, Calif., and now lives in Los Altos Hills, Calif. His fascination with economics began in middle school, as he devoured the works of Adam Smith and Milton Friedman. As a teenager, he engaged economists at the nearby Hoover Institution, a think tank at Stanford University, where Friedman was a senior research fellow. Though he never met the Nobel laureate, Weyl did write him a fan letter after reading his classic "Capitalism and Freedom," to which Friedman replied, "You said in your letter that you are 13. Surely you must have meant 23."

Nearly a decade later, Weyl continues to impress economists with insights that are advanced for his age. For his senior thesis, Weyl analyzed the impact of competition on prices in "two-sided" markets. A two-sided market is one where companies must decide not only what to charge for their products or services, but also how to divide those charges among distinct groups of customers. Credit card companies, for example, charge both the consumers who carry their cards and the merchants who accept the payment. This "two-sidedness" exists in other industries, including Internet service provision, newspaper and television advertising, and even dating websites.

"Because there are two prices involved, the antitrust and regulatory economics of these markets are much more complicated," said Weyl, whose thesis built upon research on the credit card industry that he began last summer while working for the U.S. Department of Justice's antitrust division.

Scheinkman said economists have made relatively little progress on the study of two-sided markets. "Understanding them is essential for deciding public policy questions such as antitrust policy or whether Internet neutrality -- the policy that makes it difficult for broadband providers to charge content providers such as Google for access to customers -- should be enforced," he said.

Weyl investigated the effects of competition and regulation on prices and consumer welfare. "The result is a truly first-rate paper that is likely to influence the future research in the analysis of two-sided markets," Scheinkman said.

Weyl was invited to present his research at the University of Toulouse in France by Jean Tirole, the economist who first developed the notion of two-sided markets. He also spoke at the University of Chicago at the invitation of Gary Becker, a Nobel laureate and Princeton alumnus, becoming the first undergraduate to present research at that university's renowned "Applications of Economics" workshop. After hearing Weyl's presentation, James Heckman, a Nobel-winning economist at the University of Chicago and a Princeton graduate alumnus, wrote to Scheinkman that the thesis "made a major contribution to an important literature … that surpassed the work of world leaders on this problem."

Weyl also has developed a relationship with Harvard University urban economist Edward Glaeser, a 1988 Princeton graduate who is known for his prolific and provocative work. They met at the suggestion of Scheinkman, who taught Glaeser as a graduate student at the University of Chicago.

"Glen has an enormous amount of talent and energy and is doing work on an extremely high level," Glaeser said. "Clearly, his thesis will be publishable in a good economics journal. I would expect him to get a job at one of the top five economics departments in the years to come."

In his research and his coursework, Weyl has explored a variety of disciplines. Long interested in politics as well as economics, he entered Princeton thinking he would major in the Woodrow Wilson School of Public and International Affairs. After receiving encouragement from department chair Bo Honoré and other faculty members to concentrate in economics, he also decided to pursue certificates in finance and applications of computing.

Outside of economics, Weyl said he has particularly enjoyed his studies in computer science, neuroscience, Latin American politics and philosophy. Among various ongoing research projects, he continues to work on a paper that he initially wrote for a course last year on the "Ethics of Identity" taught by philosopher Kwame Anthony Appiah. The paper explored the relationships between group and individual rights, which Weyl connected with how economists think about decision-making.

Robert Schapire, a professor of computer science who taught Weyl in two undergraduate courses and a graduate seminar on "Foundations of Machine Learning," said, "Glen takes an unusually deep interest in his courses, not merely trying to get a good grade, but rather making endless connections between the different subjects he is pursuing. He is a tremendously passionate and thoughtful student with broad interests in finance, computer science, game theory, machine learning, the foundations of probability and more.

"Over the years, I have learned a great deal from my interactions with Glen, both in and out of the classroom," Schapire added. "He is very bright, very motivated and very broad in his interests. He is a true intellectual."

Weyl has earned 14 A+'s in six departments and has received several honors and awards for his academic work, including the George B. Wood Legacy Junior Prize, the Shapiro Prize for Academic Excellence and the Quin Morton '36 Writing Seminar Essay Prize.

Even with his heavy research and coursework commitments, Weyl has been involved in numerous activities. He founded and was president of the Latin American Studies Student Organization and Princeton Against Protectionism, which supports open trade with developing countries. Weyl served as a food and film critic of The Daily Princetonian and was a member of the Debate Panel. He has been an undergraduate fellow and peer adviser at Forbes College and an undergraduate fellow at the James Madison Program, the Princeton Institute for International and Regional Studies and the Human Values Forum. He also has served as a referee for the Quarterly Journal of Economics and as a tutor in math, physics, computer science and economics.

After graduation, Weyl will spend the summer researching at the National Institute of Pure and Applied Mathematics in Rio de Janeiro, Brazil, and traveling in South America with his girlfriend and classmate Alisha Holland, who will be working at a think tank in Rio. Upon returning to Princeton, he will work on his dissertation, in which he will attempt to draw on his background in philosophy and statistical learning theory to develop standards for judging the relative merits of different economic models.

Looking back on his unusual undergraduate experience, Weyl said, "I have tried to balance things as well as I could. It has meant focusing on the things most important to me. I have a strong relationship with my girlfriend. I have a few close friends. I'm a big foodie, so I use meals to catch up with people, and I spend most of the rest of my time working. It's a balance I enjoy, because my work is very engaging to me."