Frontiers of health: Advances in medicine emerge at intersection of engineering and biology 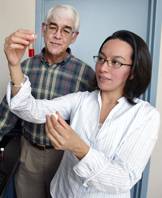 Robert Prud'homme, professor of chemical engineering and director of the Program in Engineering Biology, and graduate student Margarita Herrera-Alonso investigate a vial filled with nanoparticles, which may one day be used to treat cancer and tuberculosis. The project is one of numerous efforts by researchers in the School of Engineering and Applied Science that are focused on improving human health.

At left: When fabricating devices with features between a millionth and a billionth of a meter long to expand possibilities for DNA analysis and medical testing, researchers must don protective suits to avoid contaminating their work with something as "large" as a single speck of dust. The work is part of an ongoing collaboration that includes molecular biologist Edward Cox, biophysicist Robert Austin and electrical engineers Stephen Chou and James Sturm. 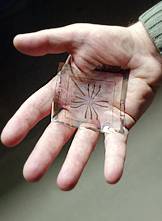 Sigurd Wagner, professor of electrical engineering, is developing an electronic membrane that maintains its conductivity even when stretched. Already used in brain injury research, membranes like this may one day be incorporated into electronic "skin" on prosthetic devices. Below left: Graduate students Ge Wang (far left) and Rebecca Fiebrink (far right) act out the verb "to give," directed by Perry Cook, professor of computer science and music, and filmed by Xiaojuan Ma. The five-second video clip may be used in assistive devices for people with aphasia.   Photos: Frank Wojciechowski

Princeton engineers are bringing new and often unexpected perspectives to bear in developing these and an array of other medical breakthroughs, while advancing the basic understanding of biology. They are the vanguard of an emerging discipline that links engineering and biology -- with human health as the beneficiary.

"The influence of biological engineering in the 21st century will be profound and far-reaching," said H. Vincent Poor, dean of engineering. "Modern health care is highly technological, and consequently engineers are at the forefront of many developments in the field. Earlier generations of engineering contributions to health care, such as imaging or prosthetics, have already had quite an impact. The future holds dramatic advances in these technologies and even more wide-ranging improvements in the detection and treatment of disease." 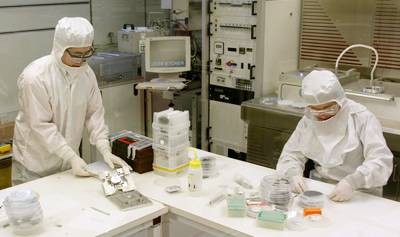 "There is a synergy between engineering and biology," said Lynn Enquist, chair of molecular biology. "Each discipline has part of the puzzle.

"The cells don't know which academic department they're in," Enquist added. "How are all of their decisions made? How do they build something with billions of cells from a single cell, with few or no mistakes? It's an amazing engineering feat."

The rise of biological engineering is a natural outgrowth of the scientific and technological progress of recent decades. Biologists have analyzed the machinery of life in incredible detail, moving their field increasingly toward mathematical precision and predictability. Engineers, in turn, are drawing on their expertise in the design and control of systems to help biologists understand how complex organisms and ecosystems work --and how to fix them when they malfunction. A similar evolution occurred in the 20th century when the development of electrical and chemical engineering followed enormous advances in physics and chemistry, Poor said.

"Using engineering to understand biology and using engineering to affect or repair biological systems are two distinct things, but they amplify one another," Poor said. In the coming years, the school's goal to help improve human health around the globe will play a major role in its own growth, in terms of the size of the faculty and student body, as well as laboratory space for research and teaching. This expansion will extend to all areas of biological engineering, which, beyond health, has enormous potential to solve major environmental and technological challenges. Ongoing collaborations between biologists and Princeton engineers include efforts to understand and manage ecosystems and to design revolutionary new materials and devices inspired by nature's own inventions.

"Princeton has extremely strong disciplines in the biological sciences, and leveraging these strengths will allow us to have an impact in biological engineering on many levels, from single cells and particular diseases to entire ecosystems," Poor said.

A major emphasis of the school will be to continue to increase collaborations across campus with colleagues in molecular biology, ecology and evolutionary biology, the Lewis-Sigler Institute for Integrative Genomics, the Princeton Environmental Institute and the Princeton Neuroscience Institute.

The engineering school's website features profiles of more than 20 projects that are likely to have a major impact on human health in the decades to come. Whether fundamental or applied, the research efforts demonstrate the strengths in Princeton's approach to solving unanswered questions and improving life around the globe.