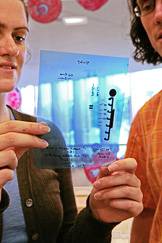 Manuel Llinás (right) examines genetic information from Plasmodium, the single-celled parasite that causes malaria, with Sharon Weeks, a senior molecular biology major. Llinás, an assistant professor in the Department of Molecular Biology and the Lewis-Sigler Institute for Integrative Genomics, is leading Princeton's efforts to understand Plasmodium on the genetic level. 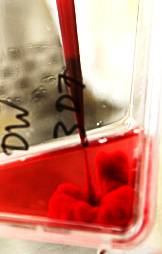 Studying Plasmodium requires Llinás and his team to grow the parasite in the laboratory. Here, infected red blood cells are mixed in a beaker containing a chemical medium that will keep the cells alive outside the body for more than 48 hours while the parasites grow to maturity.      At left: The Llinás research team has decorated its window in the Icahn Laboratory with illustrations representing the life cycle of Plasmodium, culminating in this image of the parasite emerging from a human red blood cell. After this step, the 24 newly created Plasmodia each invade another red blood cell, beginning malaria's infection cycle again.     Below left: Outside the window of his lab, Llinás and Weeks talk surrounded by images representing each stage of Plasmodium's life cycle.     Photos: Denise Applewhite

In what might be one of medicine's oldest puzzles, molecular biologist Manuel Llinás marvels at how little modern researchers know about how the pieces fit together.

"Malaria is one of the oldest diseases known to mankind, but even now, more than 2 million people die of it every year. No vaccine has ever been developed," said Llinás, an assistant professor in the Department of Molecular Biology and the Lewis-Sigler Institute for Integrative Genomics. "Compared to most other diseases with familiar names, malaria remains a mystery."

Llinás came to Princeton to change that. Since arriving in July 2005, he has spent his time exploring the genetic code of Plasmodium, the single-celled parasite that invades the bloodstream and causes the disease. He hopes his work will lead to a vaccine someday or at least a new way to approach the disease, which often proves fatal in young children, who usually cannot withstand its severe flu-like symptoms.

"Malaria is growing resistant to older drug treatments — the parasites are getting used to what we throw at them," Llinás said. "The most effective treatments we have are 50 years old. That's why in my research I'm trying to focus on what we don't know."

To scientists like Llinás, who specialize in reading a creature's genes, what we don't know is a lot. Although it has long been understood that mosquitoes carry the parasite to the human bloodstream, where the invader saps nutrients from red blood cells, the nitty-gritty details of this interaction with the host are lacking. Part of the trouble is that the genes that control parasite development in red blood cells are proving hard to decipher.

An animal's genome — its entire genetic code, spelled out in spiraling strands of DNA molecules — usually will have long stretches of DNA in common with most other animals. But while an eel's genome and an elephant's have a high degree of similarity, the Plasmodium genome seems alien in comparison. Almost half of its genome has no known counterpart in other creatures.

Strangest of all, scientists cannot identify what operates Plasmodium's genetic switchboard. In most living things, proteins called transcription factors push the buttons, but as yet, no one has isolated a single such protein in Plasmodium.

"It's unusual that transcription factors, one of the most important types of regulatory proteins in biology, have been vastly understudied in Plasmodium," Llinás said. "That's like saying the phone system works, but we have no idea how it routes our calls."

When a cell has a job to do — digesting nutrients, for example, or reproducing — its genes must be activated and deactivated in a particular order. Running the switchboard are the transcription factors, which flip each genetic switch when the time is right.

Given modern lab equipment and 48 hours, Llinás can watch every one of Plasmodium's 5,400 genes turn on and off as the parasite runs through its two-day cycle of infection. Something must be flipping those switches, he figures, and locating the right switchboard operator might allow science to disrupt the cycle, halting the disease in its tracks. Finding it is one of Llinás' goals, but first he has to discover why the transcription factors have eluded detection.

"Maybe Plasmodium has novel transcription factors," Llinás speculated. "But it doesn't mean they don't exist. And we're making progress toward finding them." 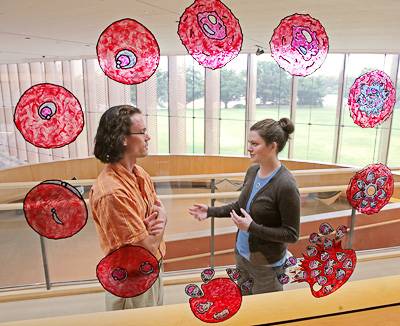 In 2003, while Llinás was a postdoctoral fellow in Joseph DeRisi's lab at the University of California-San Francisco, DeRisi's team determined for the first time the order in which the switches flip in the 48-hour cycle. It netted them an influential paper in the premier journal Public Library of Science, which has led to more findings.

In particular, a group at the National Institutes of Health found two years ago that Plasmodium shares a family of genes with a plant called Arabidopsis. Though Plasmodium is in essence an animal, its ancestors once got together with algae, and their genomes merged.

"Plasmodium still has a few plantlike characteristics as a result of this ancient merger," Llinás said. "Arabidopsis is one of the most commonly studied plants, so we may have an inroad to understanding the parasite."

The link to plants is important for future drug development. A drug that targets an animal gene in Plasmodium might inadvertently flip a few other similar switches in the human genome, bringing a malaria patient unwanted side effects. Because this gene sequence comes from plants, whose genes have little in common with humans', medicine might target it with impunity.

What encourages Llinás is the fact that these gene sequences seem to be almost exactly the same in all strains of Plasmodium. A Plasmodium from central Africa has only a slightly different genetic makeup than one from India. Because this gene sequence varies so little regardless of its host's origin, Llinás suspects it is of vital importance to the parasite.

"When a genetic tool is always the same, it usually means that evolution simply can't find any other way to do that tool's job," he said. "A lot can mutate in a creature without affecting its ability to survive, but evolution has locked this sequence in. That usually means something critical is going on there."

If Llinás can figure out what this stretch of DNA does for the parasite and how to flip its switches, it may prove to be just the Achilles' heel that researchers desperately are seeking.

"We're just getting started, but we've already identified a specific interaction between the DNA and several intriguing proteins," he said. "It's an exciting first step."

In recognition of his approaches to understanding Plasmodium, Llinás earned a New Innovator Award from the National Institutes of Health this fall. His lab in the Lewis-Sigler Institute will receive $1.5 million over the next five years to explore the relationship between the parasite's metabolism and the human cells from which it draws nutrients.

Understanding this kind of fundamental relationship is sorely needed for the fight against malaria, Llinás said. Part of what attracted him to Princeton is the presence of researchers who can collaborate with him, such as chemist Josh Rabinowitz, also an assistant professor in the Lewis-Sigler Institute.

"We'd like to know more about how Plasmodium interacts with the cells it invades," Llinás said. "To explore that issue, I need the help of a metabolism expert like Josh. His state-of-the-art methods are the reason these studies are currently possible. Fortuitously, our labs are right next to each other and this has developed into a fantastic collaboration combining our respective specialties. I wouldn't even be studying Plasmodium metabolites without knowing him."

Llinás also works with 10 postdoctoral fellows, graduate students and undergraduates in his Icahn Laboratory setting. In addition, he shares his skills with students through teaching the junior year project lab in the Integrated Science Curriculum.

This year, Llinás will teach units on malaria for two new courses on global infection and diseases offered by the Woodrow Wilson School with school faculty member Burton Singer, Thomas Shenk of the Department of Molecular Biology and Adel Mahmoud, who has a joint appointment in the school and the department.

"The advantage of having Manuel here at Princeton is that we can combine different approaches to the disease," said Mahmoud, the former president of Merck Vaccines. "We can reach out to our colleagues in the world and offer a comprehensive approach to malaria. Manuel brings us to the next level with his knowledge of Plasmodium's molecular structure."