A triple-punch of antibodies both prevented hepatitis C infection and wiped out the disease after it had established itself in laboratory mice, according to a study led by Princeton University researchers. Instead of delivering the three antibodies directly, the researchers administered a genetic "instruction set" that, once in a cell, developed into antibodies that target the portions of the virus that do not mutate.

Mice treated with the antibody genetic code resisted becoming infected with hepatitis C when they were exposed to the virus, the researchers reported in the Sept. 17 issue of the journal Science Translational Medicine. The researchers also gave the antibodies to mice that already were infected and found that, in many cases, the infection disappeared to levels below detection.

Hepatitis C affects roughly 170 million people worldwide and causes chronic liver damage and cancer. The virus is transmitted to humans via contact with contaminated blood during intravenous drug use or medical procedures. Attempts to develop a hepatitis C vaccine have been hampered by the virus's ability to mutate into numerous subtypes. This genetic diversity is a barrier to developing traditional vaccines, which work by eliciting an immune response against a specific protein or other feature on the surface of the viral particle. These protein targets frequently change when the virus mutates.

To get around this problem, the researchers selected antibodies known to target parts of the virus that tend not to change during mutation, explained lead author Alexander Ploss, an assistant professor in Princeton's Department of Molecular Biology. Such antibodies are called "broadly neutralizing" because they deactivate a variety of genetic subtypes. The ones used in the study were discovered by co-author Mansun Law and his team at the Scripps Research Institute in La Jolla, California. 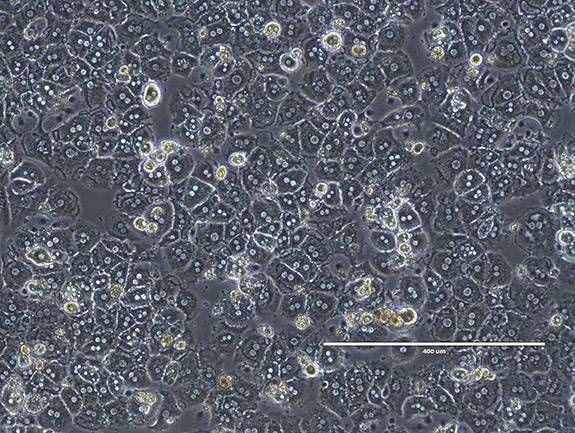 A study led by Princeton University researchers found that a triple-punch of antibodies both prevented hepatitis C infection and wiped out the disease after it had established itself in laboratory mice. Instead of delivering the antibodies directly, the researchers administered a genetic "instruction set" that, once in a cell, developed into antibodies that target the portions of the virus that do not mutate. Hepatitis C affects roughly 170 million people worldwide and causes chronic liver damage and cancer. Attempts to develop a hepatitis C vaccine have been hampered by the virus's ability to mutate into numerous subtypes. This image shows liver cells infected with hepatitis C. (Image by Markus von Schaewen, Princeton University)

Rather than injecting the actual antibodies — which can be degraded before reaching their targets — the researchers injected the genetic instructions for making the three antibodies. These instructions consist of the antibodies' genetic codes, or DNA, each linked to the DNA for a benign virus called adeno-associated virus (AAV). This virus acts as a ferry that brings the antibody genes into cells, a delivery technique pioneered by co-author David Baltimore and colleagues at the California Institute of Technology.

Once inside the cells, the genetic codes were translated by the cell's machinery into hepatitis C antibodies, which were excreted into the bloodstream where they attached to the proteins on the viral surface to inactivate them.

The investigators found that mice injected with the AAV-antibody particles went on to develop high and sustained levels of the antibodies against the virus in their blood, and these antibodies protected them from becoming infected when they were later exposed to the virus. "The treatment is a single intramuscular injection that results in high quantities of antibodies in circulation for several months," Ploss said.

The researchers also tried the AAV-antibody treatment on mice that already had a hepatitis C infection. "We weren't sure we would see any results because the antibody can only neutralize viruses that are outside of cells, whereas viral replication is taking place inside the cell, but we decided to try it," Ploss said. "The surprising thing was that within several weeks we saw a decrease in the level of virus in the blood, and in many of the mice, their virus level went below the limit of detection."

Ploss cautioned that the studies in mice would have to be replicated in human clinical trials, a step that could be a long way off. But new approaches for preventing hepatitis C are needed given how widespread the virus is in many parts of the world. Roughly eight out of every 10 people with the virus develop a chronic infection that leads to progressive liver disease and scarring. Yet most infected individuals do not display symptoms for a decade or more. A drug that came on the market in 2013 can cure the disease, but the high cost may prevent or delay widespread use, especially in developing countries.

Michael Houghton, a faculty member at the University of Alberta who, with colleagues, discovered the hepatitis C virus in 1989, said that the research by Ploss and his co-authors shows potential for developing an effective and affordable treatment for the virus.

"This work is very important since it shows that a combination of neutralizing antibodies against the hepatitis C virus can restrict viral spread in the liver thereby ameliorating, and possibly curing, chronic infection," said Houghton, who was not involved in the current study but is familiar with it. "The current work opens up the possibility of treating more patients in a less expensive way and also gives the patient and clinician more treatment options for a disease that affects 170 million people worldwide."

The study also provides evidence for the use of antibody-based strategies to prevent hepatitis C infection, Ploss said. "Much of the current research on vaccines is focused on stimulating the part of the immune system that involves T cells [which are white blood cells with a central role in the body's response to pathogens]," Ploss said, "but our study suggests that broadly neutralizing antibodies could be an important component of an effective hepatitis C vaccine."

The ability of the antibody to remove an existing infection may shed light on how the virus maintains a chronic infection in humans, Ploss said. "Our results seem to suggest that to sustain a persistent infection, the virus must continually infect new cells rather than relying on an existing set of infected cells," he said. "When we inject antibodies that destroy the viral particles, we may be breaking this chain of infection. This suggests that long-term treatment with broadly neutralizing antibodies could be effective at treating existing infection."

Because hepatitis C virus is a human infection that does not naturally occur in other animals, the researchers used two strains of mice with human-like livers that were developed by Ploss and colleagues at Rockefeller University in New York City, including the study's first author, Ype de Jong, now an assistant professor of medicine at the Weill Cornell Medical College. In one strain, the mouse-liver cells express human molecules required for viral uptake, while in the strain developed with de Jong the mice livers contain human cells.