An emerging class of long-lasting flu vaccines could do more than just save people the trouble of an annual flu shot.

Princeton University-based researchers have found that the "universal" vaccine could for the first time allow for the effective, wide-scale prevention of flu by limiting the influenza virus's ability to spread and mutate. Universal, or cross-protective, vaccines — so named for their effectiveness against several flu strains — are being developed in various labs worldwide and some are already in clinical trials.

The researchers recently reported in the Proceedings of the National Academy of Sciences that the new vaccines would make a bout with influenza less severe, making it more difficult for the virus to spread. At the same time, the vaccines would target relatively unchanging parts of the virus and hamper the virus's notorious ability to evolve and evade immunity; current flu vaccines target the pathogen's most adaptable components.

A computational model the team developed showed that these factors could achieve unprecedented control of the flu virus both seasonally and during outbreaks of highly contagious new strains. Cross-protective vaccines could even improve the effectiveness of current vaccines, which are designed to only fight specific flu strains, the researchers report.

Controlling the flu, which is now like "chasing a moving target," could advance from the current reaction stage to that of real population-wide prevention, said lead author Nimalan Arinaminpathy, a postdoctoral research associate in Princeton's Department of Ecology and Evolutionary Biology.

"Because the flu quickly evolves to escape host immunity, current vaccines tend to be prioritized for inoculating specific high-risk groups such as asthma sufferers and the elderly every year," Arinaminpathy said.

"So, at the moment, vaccine programs focus on clinical protection for those receiving the vaccine, but we hope to eventually graduate to being able to control the virus' spread and even its evolution," he said. "Our model provides a strong conceptual basis as to how and why the 'universal' vaccines would achieve that." 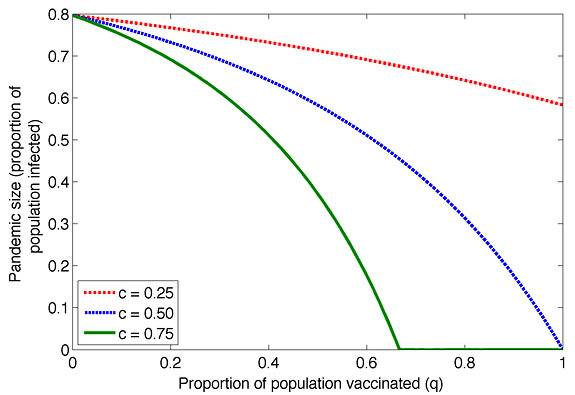 Princeton-based researchers developed a model that revealed that the emerging class of cross-protective, or "universal," vaccines will allow for better flu prevention by limiting the influenza virus's ability to spread and mutate. For the above figure, the researchers simulated the effect of a basic cross-protective vaccine on a flu pandemic based on the proportion of the population that received it. They created three groups based on how much the vaccine reduced their contagiousness: by 25 (red), 50 (blue) and 75 (green) percent, respectively. At its most effective, the vaccine resulted in strong "herd immunity," or a general resistance to the virus despite only a part of the population receiving the vaccine. The percentage of the population infectedwith influenza dropped to zero even though only 70 percent of the population had vaccine protection. (Image by Nimalan Arinaminpathy)

Arinaminpathy, who works in the lab of co-author Bryan Grenfell, Princeton's Kathryn Briger and Sarah Fenton Professor of Ecology and Evolutionary Biology and Public Affairs, also worked with second author Oliver Ratmann, a postdoctoral associate at Duke University; Katia Koelle, a biology professor at Duke; Suzanne Epstein and Graeme Price of the U.S. Food and Drug Administration; and research scientist Cecile Viboud and physician Mark Miller, both of the National Institutes of Health's Fogarty International Center.

The research presents a realistic and important assessment of how the universal vaccines' ability to work against a breadth of flu strains can be wielded to benefit public health, said James Lloyd-Smith, an assistant professor of ecology and evolutionary biology at the University of California-Los Angeles. Lloyd-Smith had no role in the study, but is familiar with it.

"This is the first study that looks at the population consequences of the next generation of vaccines, both in terms of epidemiological impact and evolutionary impact on the virus," Lloyd-Smith said. "They combined the latest information out of these vaccine trials, and the very latest and best models of influenza virus evolution and epidemiology. They put those together and asked important and relevant questions about how this new vaccine would actually play out.

"They give very clear insights about what the impact of these vaccines would be," he said. "In doing so, this work provides incentive for the vaccine manufacturers to continue this research and development, and it provides some guidance for public health authorities to think about using these new vaccines once they become available."

Arinaminpathy and his colleagues developed their model using an archetype of the universal vaccine. In recent years, outbreaks of potent flu strains — such as avian flu in 2003 — and advances in biotechnology have spurred research teams at pharmaceutical companies and government organizations such as the National Institutes of Health to work on cross-protective vaccines, Arinaminpathy said. Projections for a publicly available vaccine range from one to five years.

Current flu vaccines are produced to counter the influenza strains that the World Health Organization predicts will dominate a particular flu season. Inoculation typically focuses on protecting people who are vulnerable to the virus. However, this approach does not provide long-term or widespread immunity, Arinaminpathy said. The flu virus is always evolving, and so vaccines need to be updated each year.

The reason is that these vaccines zero in on hemagglutinin (HA), proteins protruding from the virus' surface that allow it to attach to and invade host cells. Small mutations in these highly adaptive appendages can create new versions of the virus that often are invulnerable to the vaccine designed for their former selves, a tactic known as "immune escape."

Universal vaccines instead bypass the protruding HA surface to target more constant proteins with less evolutionary flair, Arinaminpathy said. Because HAs are still active, the virus may still infect people, but it cannot wreak the same havoc.

The various universal vaccines being developed target different viral components, but they all have the potential to slow viral transmission across many flu variants, Arinaminpathy said. The researchers used that overarching feature in their model vaccine. The researchers then simulated the effectiveness of their basic universal vaccine in two types of flu outbreak: pandemic and epidemic.

A flu pandemic — the sudden and rapid spread of a new, highly contagious strain — is difficult to predict and typically impossible to control through vaccination alone, Arinaminpathy said. But universal vaccines act on virus targets that are relatively constant across all types of flu, even pandemic flu. The researchers found that the vaccines could be deployed on a large scale to avert a pandemic altogether, even if only a proportion of the population received vaccination. The vaccine would raise "herd immunity," wherein even unvaccinated individuals are protected because many people around them are immune.

Next, the researchers explored how cross-protective vaccines could combat those strains that cause flu epidemics every winter. To test how the vaccine would affect the flu virus, the researchers ran their model according to the two prevailing theories of flu evolution, including a theory a team led by Koelle reported in the journal Science in 2006.

In both cases, mass immunization with universal vaccines, maintained over several years, would slow viral evolution, or immune escape. Significantly, the researchers found that universal vaccines need not be fully protective to control flu, Arinaminpathy said. To account for any potential differences universal vaccines might have in the level of flu immunity they provide, Arinaminpathy and his colleagues assumed their hypothetical vaccine would not prevent infection, but only reduce the severity of symptoms such as coughing and sneezing, which would bring down the chances of transmitting the virus.

The researchers' simulation showed that overall this led to fewer people becoming infected and, thus, fewer people gaining immunity to the dominant flu strain. That would remove the advantage that any new strains might have, Arinaminpathy said. At the same time, lower rates of infection would mean that fewer people could harbor mutant viruses in the first place because they never caught the original strain.

"We found that by putting the brakes on flu transmission, you could also put the brakes on flu evolution," Arinaminpathy said. "Our model illustrates how we can control the flu this way, instead of simply reacting to it every few years.

"You can close schools and administer our current crop of vaccines and antiviral drugs as much as you want, but never realistically enough to stop transmission over any extended period of time," he said. "With the cross-protective vaccines, we may be able to finally throw a blanket on the transmission of all flu strains over the long term in a way that can impact the virus's evolution."

That said, the researchers indicate that cross-protective vaccines could buttress existing vaccines that provide strain-specific immunity by keeping viral evolution in those strains to a minimum. If so, the result would be that the universal vaccine would expand the existing arsenal of flu control rather than replace it, said Lloyd-Smith of UCLA,

"Flu control has been dogged by this problem that the virus just keeps evolving. It stays one step ahead of the traditional means of controlling it. So, with strain-specific vaccines, you're always chasing last year's virus," Lloyd-Smith said.

"By using the two vaccines in conjunction, we could get more mileage out of the strain-specific vaccines before they have to be changed," he said. "That gives us an edge in the ongoing evolutionary arms race that we're engaged in with influenza. Universal vaccines won't get rid of the flu completely, but they should take our control efforts to the next level."

The study was published Feb. 21 in the Proceedings of the National Academy of Sciences and was supported by a grant from the National Institutes of Health.