COVID-19's rapid spread throughout the world has been fueled in part by the virus' ability to be transmitted by people who are not showing symptoms of infection.

Now, a study by researchers at Princeton has found that this silent phase of transmission can be a successful evolutionary strategy for pathogens such as viruses like the one that causes COVID-19. The study was published May 8 in the journal Proceedings of the National Academy of Sciences. 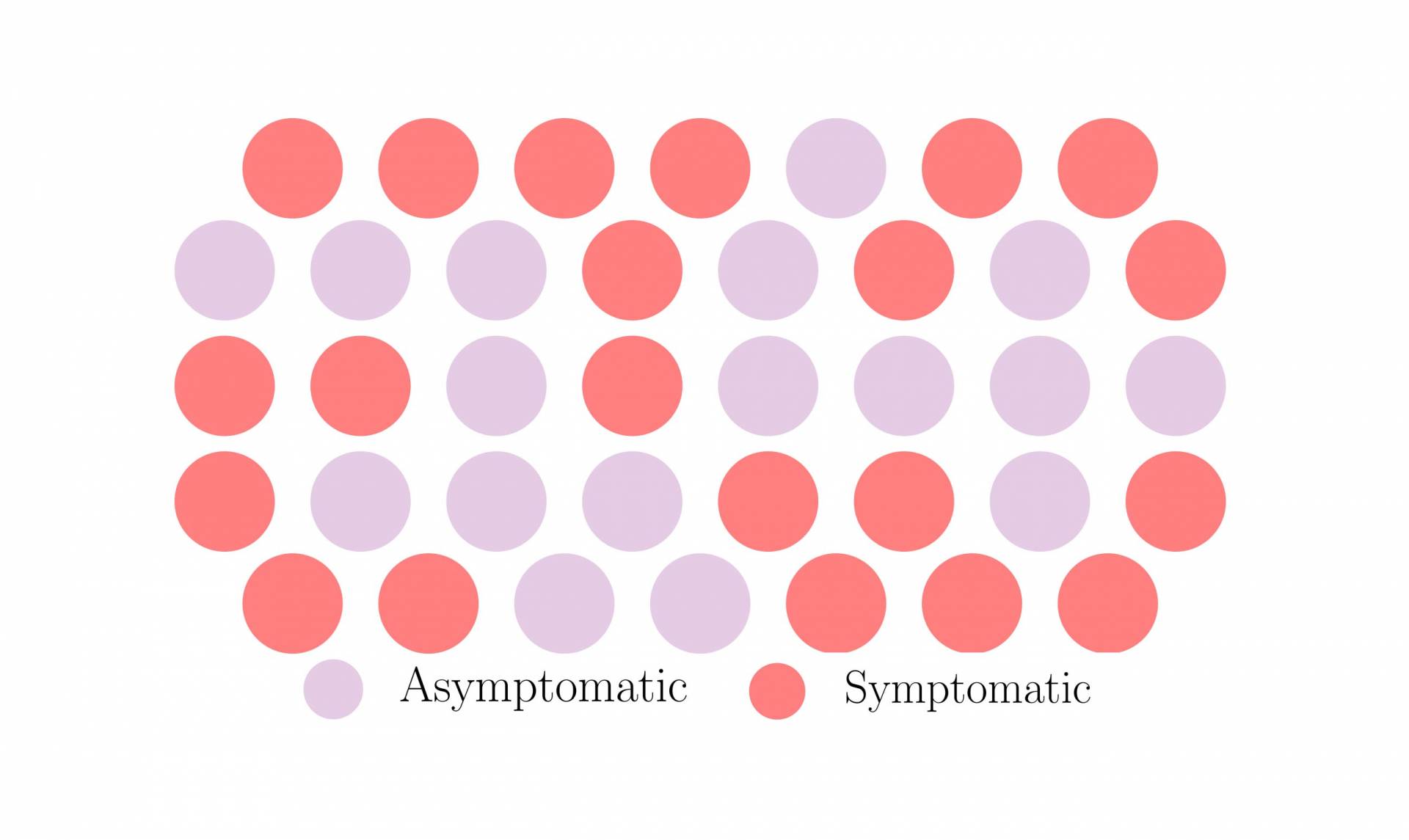 Researchers at Princeton University looked at the evolutionary strategies that pathogens employ to spread through a population and found that symptomless transmission, a tactic employed by the virus that causes COVID-19, can be a successful strategy for spread through the population.

The answer could inform how public health experts plan control measures such as quarantines, testing and contract tracing.

"An asymptomatic stage for various reasons could provide certain benefits to the pathogen," said Bryan Grenfell, Princeton's Kathryn Briger and Sarah Fenton Professor of Ecology and Evolutionary Biology and Public Affairs, Woodrow Wilson School. "With the COVID-19 crisis, the importance of this asymptomatic phase has become extremely relevant."

Like more complex organisms, viruses can evolve by natural selection. New variants are generated by mutation and if these changes benefit pathogen transmission, then that strain of the virus will spread.

"Viral evolution involves a tradeoff between increasing the rate of transmission and maintaining the host as a base of transmission," said Simon Levin, Princeton's James S. McDonnell Distinguished University Professor in Ecology and Evolutionary Biology. "Species that navigate this tradeoff more effectively than others will come to displace those others in the population."

Levin said it is useful to think about disease from the viewpoint of a game between the pathogen and the host. "These are host-parasite interactions," Levin said, "and thinking about them from an evolutionary perspective is something we, along with many other scientists, have been interested in for a long time."

The researchers made modifications to a standard mathematical model of how a disease spreads through a population in which individuals are classified as either susceptible (S), infected (I) or recovered (R). To explore the role of symptomless transmission, the researchers divided the infected (I) compartment into two stages: In I1, individuals' symptoms can range from none (asymptomatic), to mild, to fully symptomatic. In I2, all individuals are fully symptomatic.

As the COVID-19 pandemic shows, a silent infection has certain short-term advantages. It makes control strategies — such as identification, quarantine and contact tracing — difficult to implement. Infectious people who lack symptoms tend to go about their lives, coming in contact with many susceptible people. In contrast, a person who develops a fever and cough may be more likely to self-isolate by, for example, staying home from work.

However there are also drawbacks: asymptomatic people may generate fewer infectious particles and thus fewer will escape from the infected person, for example in a violent sneeze or forceful cough. The overall transmission could be reduced over time.

The researchers used disease modeling to explore the tradeoffs between these scenarios.

They undertook the study long before the novel coronavirus burst on the scene. In fact, graduate student Chadi Saad-Roy started the study in May 2019, initially to consider influenza, which also has significant asymptomatic infection.

"I wondered why asymptomatic flu would arise in evolution," Saad-Roy said, "and so as a team we formulated a simple model to try to understand why evolution would favor such behavior."

To conduct the research, Saad-Roy worked with Grenfell, Levin and Ned Wingreen, Princeton's Howard A. Prior Professor in the Life Sciences and a professor of molecular biology and the Lewis-Sigler Institute for Integrative Genomics.

Pathogens can exhibit a variety of behaviors that contribute to their spread.

Some viruses, such as HIV, spread before symptoms are identified. Other viruses transmit around the time that symptoms appear. For example, the now-eradicated virus that caused smallpox tended to generate significant symptoms by the time transmission started.

Most pathogens probably employ a combination of silent and symptomatic strategies.

To study the effect of symptomless transmission, the team made modifications to a standard mathematical model of how a disease spreads through a population. The model breaks the population up into compartments representing susceptible, infected and recovered individuals.

In the team's version of the model, the researchers further broke the "infected" compartment into two stages. In the first infected stage, the researchers could vary the level of symptoms so that some individuals will have no symptoms, others will have some symptoms and others will have significant symptoms. In the second infected stage, the individuals are fully symptomatic. The team focused not just on the effect of symptom variation on disease spread, but also on the evolutionary consequences of exhibiting varying levels of symptoms in the first stage.

The team found that successful strategies emerged when the first stage of infection was completely symptomless, fully symptomatic, and somewhere in between. They also found that the range of being symptomatic, from no symptoms to maximum symptoms, could be altered by small changes in disease control strategies.

The implication of this last part of the analysis is that disease control strategies could, over long time periods, influence which strategy a pathogen deploys, and thus have impacts on the course of an epidemic.

He said he is not surprised that the virus that causes COVID-19 employs symptomless spread. "Based on our model," he said, "it's a natural evolutionary end point for certain diseases."

The study, "Dynamics in a simple evolutionary-epidemiological model for the evolution of an initial asymptomatic infection stage," by Chadi M. Saad-Roy, Ned S. Wingreen, Simon A. Levin, and Bryan T. Grenfell, was published online in the journal Proceedings of the National Academy of Sciences on May 8, 2020. DOI: 10.1073/pnas.1920761117