One of the first studies to examine the effect of climate change on diseases such as influenza that are transmitted directly from person to person has found that higher temperatures and increased rainfall could make outbreaks less severe but more common, particularly in North America.

Princeton University-led researchers studied how climate conditions influence annual outbreaks of respiratory syncytial virus (RSV) in the United States and Mexico, where the common pathogen can cause serious respiratory infections. The researchers created a model of the virus’ peaks during the year using county-level observations of RSV infection from the United States and state-level data from Mexico.

The researchers reported in the journal Nature Communications that RSV epidemics are subject to different climatic factors depending on location. Fluctuations in humidity are the driving force behind the virus’ spread in temperate northern locations, while RSV epidemics track the rainy season in tropical locales. The virus is governed by both humidity and rainfall in “crossover” locations such as Mexico’s Sinaloa state that typically experience two epidemic peaks each year. 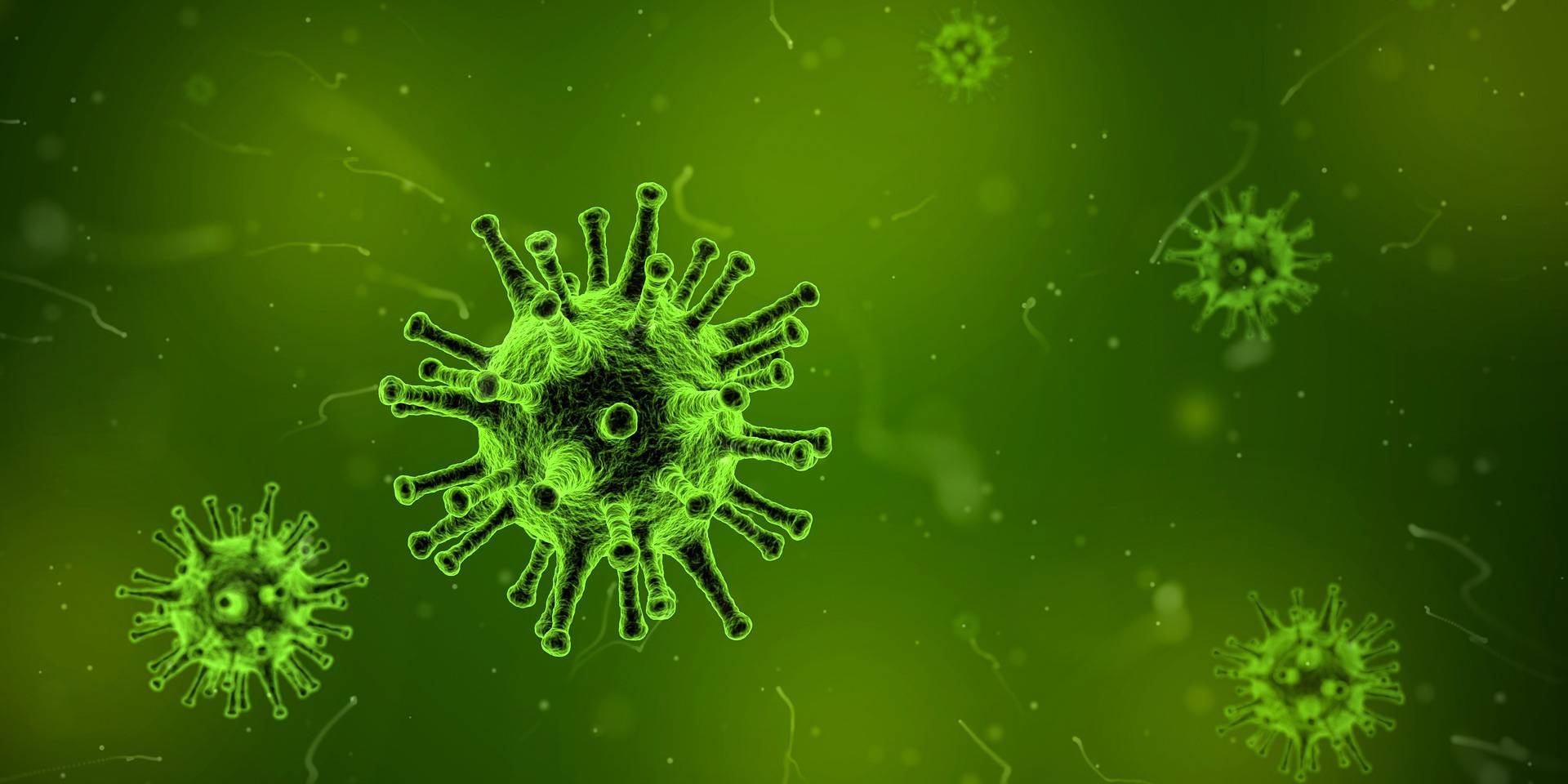 Princeton University-led researchers studied annual outbreaks of respiratory syncytial virus (RSV) in one of the first examinations of how climate change could affect diseases such as influenza (pictured) that are transmitted directly from person to person. They found that while outbreaks of RSV could become generally less severe, infections may become more common, which could leave people more vulnerable to the virus over the long term, particularly children.

When the researchers coupled their results with climate change models, they found that while outbreaks of RSV became generally less severe, the virus’ peak-infection cycle shifted northward, explained first author Rachel Baker, a postdoctoral research associate in the Princeton Environmental Institute (PEI). In many areas, particularly in the northern United States, epidemics of RSV could become more common and strike earlier in the year.

“Right now, we see RSV cases throughout the year in tropical locations. In the majority of the United States, we see annual seasonal outbreaks with no cases in the summer months, and we see biennial dynamics in the northern parts of the United States where there are large numbers of cases every two years,” said Baker, who is based in the research group of co-author and PEI associated faculty member C. Jessica Metcalf, Princeton assistant professor of ecology and evolutionary biology and public affairs.

“It is those patterns that could shift northward,” Baker said. “Essentially we will see few of the biennial dynamics and more of the persistent tropical-type dynamics in the future. We also predict an earlier timing of the epidemic.”

On average, RSV epidemics could see fewer individual cases as the climate changes and be more similar from year to year, the researchers found. In their climate models, projected increases in temperature-driven humidity resulted in less intense outbreaks of RSV, although epidemics became more severe in locations that experienced extreme rainfall, usually in the tropics.

While toned down RSV epidemics are in some ways a positive outcome, there will be more persistent occurrences of the virus throughout the year, Baker said. In short, infections will be spread out rather than be concentrated in certain seasons. That could leave people more vulnerable to the virus over the long term, particularly children. More than half of infants born in the United States contract the virus during their first RSV “season.” 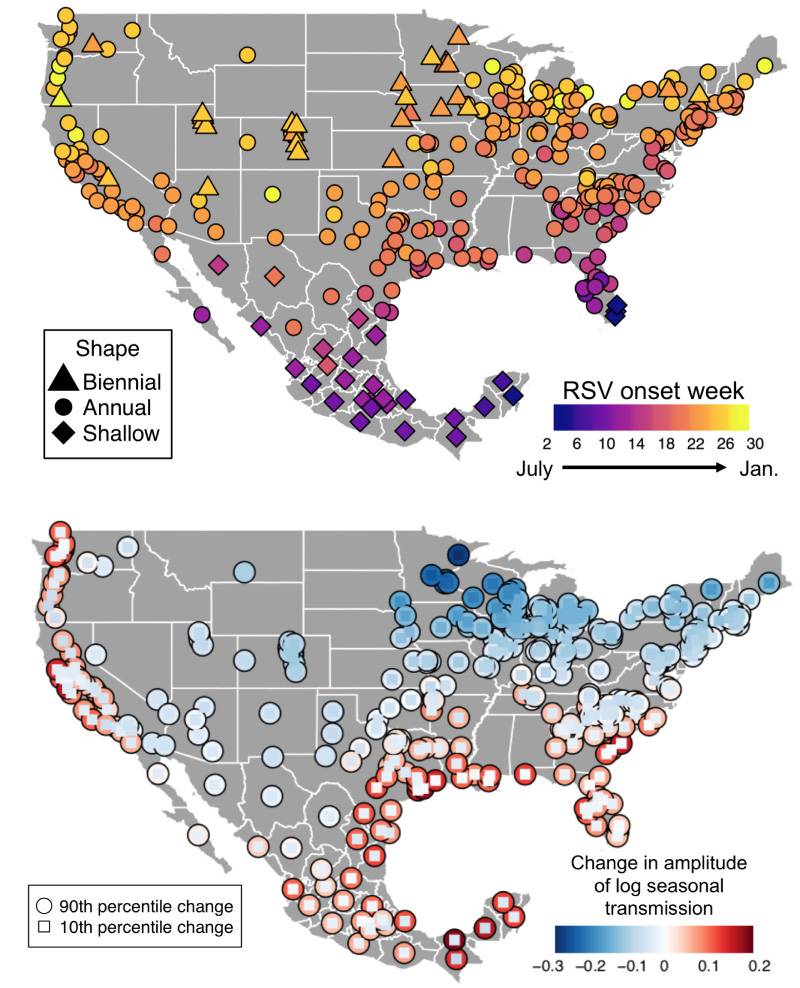 Princeton University-led researchers studied annual outbreaks of respiratory syncytial virus (RSV) in one of the first examinations of how climate change could affect diseases transmitted directly from person to person. While outbreaks of RSV could become generally less severe, infections may become more common in areas such as the northern United States that currently experience outbreaks seasonally or every two years. The top map shows the present-day timing of RSV epidemics in the United States and Mexico. Under climate change (bottom map), epidemics could become more severe in tropical areas due to increased rainfall, while greater humidity in temperate regions could reduce the intensity of single outbreaks as infections become more common throughout the year.

“We should expect to see more cases outside of the RSV season, so public health workers should be prepared for changes to the timing and frequency of cases,” Baker said. “Changing dynamic patterns also could alter the age at which children get RSV, and we hope to consider in future work how climate change may affect this. The earlier a child gets RSV, the more likely they are to be hospitalized.”

The paper is the first publication to stem from PEI’s Climate Change and Infectious Disease initiative, which brings together climate scientists and epidemiologists to better understand the direct and indirect impacts of climate on human health. Co-authors on the paper include Gabriel Vecchi, professor of geosciences and the Princeton Environmental Institute, and PEI associated faculty Bryan Grenfell, the Kathryn Briger and Sarah Fenton Professor of Ecology and Evolutionary Biology and Public Affairs, as well as Princeton postdoctoral researchers Caroline Wagner in ecology and evolutionary biology and Wenchang Yang in geosciences.

The research team also included Ayesha Mahmud, assistant professor of demography at the University of California–Berkeley; Virginia Pitzer, associate professor of epidemiology at Yale University; and Cécile Viboud, a staff scientist at the National Institutes of Health.

Most research related to climate change and infectious disease has focused on maladies that are spread by vectors such as mosquitoes, Baker said. But the Nature Communications study expands into new territory by investigating a disease that passes through direct contact among infected hosts, she said. Their work could provide a model for projecting how climate change could affect pathogens similar to RSV and influenza, Baker said.

“Our modeling approach, which allowed us to disentangle the effect of climate from other drivers of disease transmission, can be applied to other pathogens,” Baker said. “Our results suggest that climate can play a central role in driving the timing and dynamic patterns of infectious disease. Characterizing this role is crucial for understanding the future effect of climate change.”

The researchers provided an important “unified explanation” that answers enduring questions about RSV, Baker said. Previous work had found different patterns of RSV epidemics in tropical and temperate locations, and there had been speculation that different drivers are at play. Baker and her co-authors, however, show that a common underlying humidity and precipitation effect can explain these different spatial patterns.

A challenge in studying RSV has been that the virus cannot be studied in a laboratory, Baker said. Existing work on climate and influenza, for example, was made possible by using guinea pigs, which contract and transmit influenza much like humans do. By presenting results from a model that were similar to data from the lab, the research offers hope for accurately studying other pathogens that are difficult to observe experimentally.

“There is no animal that can be used to study RSV, which makes large-scale observational studies such as ours particularly important for understanding the climate drivers of transmission,” Baker said. “The fact that we get results similar to those found for influenza transmission in guinea pigs is incredibly interesting.”

The paper, “Epidemic dynamics of respiratory syncytial virus in current and future climates,” was published by Nature Communications on Dec. 4. This work was supported by the Princeton Environmental Institute, the Cooperative Institute for Modeling the Earth System (CIMES) and the Princeton Institute for International and Regional Studies (PIIRS).