Measles, one of the world's most contagious diseases, can spread more quickly in schools than previously thought, according to Princeton University-led research. The researchers report in the journal Proceedings of the National Academy of Sciences that the only sure method of controlling measles among schoolchildren is to maintain very high vaccination rates.

The researchers conducted one of the first direct examinations of how measles spreads at the school level by reviewing data from a 1904 measles outbreak in London that affected 18 schools. While schools are known hotspots for infections such as measles, scientists actually have little information about the specific rate at which the measles spreads among children in school, explained senior author Bryan Grenfell, Princeton's Kathryn Briger and Sarah Fenton Professor of Ecology and Evolutionary Biology and Public Affairs. The data came from the Wellcome Library's Collection of digitized historical medical documents maintained by the London-based Wellcome Trust.

"This study addresses that gap with historical data," Grenfell said. "We need to be cautious in comparing historical data from the early 1900s to transmission today; however, our study does illustrate the potentially high transmission rates of infection in schools where vaccination is low."

A pathogen's infection rate is indicated by the figure R0 — pronounced "R nought" — which indicates how many people catch a disease from the initial carrier in a fully susceptible population, Becker said. In the general population, measles has a notably high transmission rate of R0 = 12-18.

In the schools at the center of the 1904 outbreak, the researchers found that at the school level each sick child transmitted measles to an average 27 people with the transmission rate at individual schools falling within a range of 12 to 42. Zooming in to the classroom level, each sick child infected 40 others on average with a transmission-rate range as low as 8 in one school to a whopping 93 in another.

Using these historic estimates, the researchers investigated how measles might spread in today's schools. There are presumably notable differences in the living conditions, hygiene and crowding children experienced in London in 1900 versus what children experience in the 21st-century United States, Becker said. Nonetheless, transmission estimates from more recent periods in the pre-vaccination era indicate that measles infection has been quite strongly focused in schools. 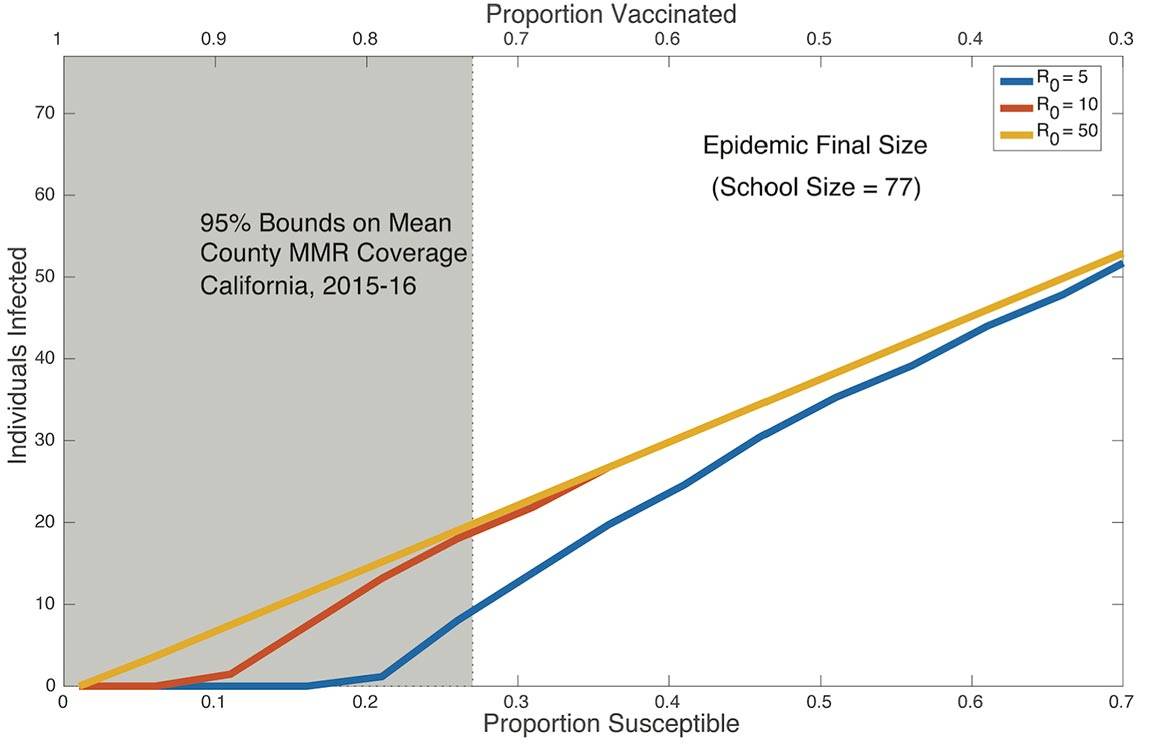 Princeton University-led research found that measles, one of the world's most contagious diseases, can spread in schools quickly unless vaccination rates are very high. The researchers used data from a 1904 measles outbreak in London to conduct one of the first examinations of how measles spreads at the school level. The researchers developed a mathematical model (above) based on current vaccination estimates in California where 95 percent of students are vaccinated against measles (gray box). In a hypothetical class of 77 students, a measles outbreak with a very high transmission rate (yellow) — similar to what the researchers found existed in schools in 1904 — infects students despite a high vaccination rate. The number of students infected with measles (left bar) begins to steadily increase as the proportion of vaccinated children (top bar, left to right) falls below 100 percent. Vaccination levels of roughly 90 percent and 80 percent, respectively, are able to contain an outbreak with a medium (red) or low (blue) transmission rate. (Image courtesy of Alexander Becker, Department of Ecology and Evolutionary Biology)

The researchers developed a mathematical model based on current vaccination estimates in California and found that high vaccination levels were required to prevent transmission.

"This work adds more evidence to the benefit of having a fully vaccinated school-age population," Becker said. "Even if a school has high coverage, it should push to go higher because there could be a risk of a significant outbreak."

At the same time, Grenfell said, the study emphasizes that the pervasiveness of measles once it infects a school population calls out for a better understanding of how it spreads than scientists currently have.

"Probably the most recently studied infection at the school level is influenza," he said. "Our results underline that we also need contemporary studies of measles transmission in schools when it occurs. More generally, our paper emphasizes the importance of digitizing the rich trove of historical data on transmission of infectious disease, as the Wellcome Library did with these data."

"These results highlight the importance of sustaining high measles vaccination coverage among school children," said William Moss, a Johns Hopkins University professor of epidemiology, who is familiar with the research but had no role in it. "Because of the high transmissibility of measles virus within schools, outbreaks will occur among the unvaccinated school children should an infectious individual enter the school," he said.

The researchers show that at small spatial scales such as schools, highly contagious pathogens can behave with a complexity that becomes obscured in large-scale transmission data from a city or national level, Moss said.

In addition, the researchers' application of 1904 data to a current public health scenario illustrates the value of historical information in understanding how diseases spread, Moss said. After all, he said, while society has changed since then, measles has not.

"Measles has a characteristic clinical appearance and during outbreaks does not need laboratory confirmation, which didn't exist in 1904," he said. "This shows the value of searching for such data sets and of the stories they can tell that are still of relevance more than 100 years later."

Becker and Grenfell worked with Ruthie Birger, a former graduate student in ecology and evolutionary biology now at Columbia University; Aude Teillant, a former research assistant in the Princeton Environmental Institute now at the University of Caen Normandy in France; and Paul Gastanaduy and Gregory Wallace of the Centers for Disease Control and Prevention.

The paper, "Estimating enhanced prevaccination measles transmission hotspots in the context of cross-scale dynamics," was published Nov. 21 in the Proceedings of the National Academy of Science. The work was supported by the Center for Health and Wellbeing in Princeton's Woodrow Wilson School of Public and International Affairs; the RAPIDD (Research and Policy for Infectious Disease Dynamics) program funded by the U.S. Department of Homeland Security and managed by the National Institutes of Health's Fogarty International Center; and the Bill and Melinda Gates Foundation.