The Ebola outbreak that has swept West Africa since 2014 may have cleared the way for a more familiar killer that could claim thousands of more lives — measles. 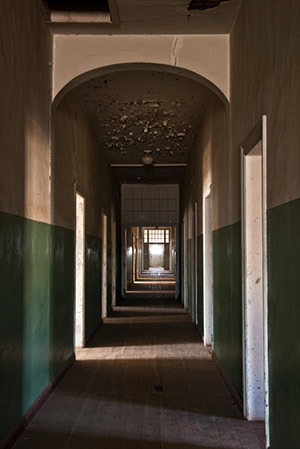 Princeton University and Johns Hopkins University researchers report the African countries most affected by the 2014 Ebola outbreak — Guinea, Liberia and Sierra Leone — could now be highly susceptible to measles epidemics due to severe disruptions in routine health care such as measles vaccinations. Numerous health facilities were closed or devoted to Ebola treatment, while people also stayed away from hospitals and clinics to avoid contracting the virus. A potential measles outbreak could result in an additional 2,000 to 16,000 deaths, the researchers found.

The African countries most affected by the outbreak could now be highly susceptible to measles epidemics due to severe disruptions in health-care systems caused by Ebola, researchers at Princeton University and Johns Hopkins University report in the journal Science. The closing of and public aversion to clinics and hospitals during the Ebola epidemic resulted in the reduction of routine procedures such as measles vaccination.

The researchers studied the West African nations of Guinea, Liberia and Sierra Leone where the Ebola outbreak was most intense and is still active, having killed nearly 10,000 people and infected more than 24,000. A potential measles outbreak in those nations, the researchers found, could result in an additional 2,000 to 16,000 deaths after 18 months of initial health-care system disruption. Prior to Ebola, and after significant vaccination campaigns, all three countries reported only 6,937 measles cases from 2004 to 2013.

Saki Takahashi, first author and a Princeton University graduate student of ecology and evolutionary biology, said that the report is intended to draw attention to the growth and impact of measles susceptibility, and encourage vaccination by governments and health organizations. Large-scale vaccination campaigns in countries affected by Ebola are likely to be key to staving off potential measles epidemics, said Takahashi, who began the work while in the research group of corresponding author Justin Lessler, a Johns Hopkins assistant professor of epidemiology.

"The negative legacy of Ebola could be minimized by deploying vaccines and other important public health interventions," Takahashi said. "It's about preparing for collateral damage resulting from Ebola. Even after the threat of Ebola begins to recede there is the potential for other infectious disease crises."

Reports from Ebola-affected countries found that numerous health facilities were closed or devoted to Ebola treatment, while people also stayed away from hospitals and clinics to avoid contracting the virus, she said. The unintended consequences were not only a drop in measles vaccinations, but also reduced polio inoculations, the unavailability of treatment for endemic conditions such as AIDS and malaria, and a reduction in prenatal care, the researchers report.

"The focus on Ebola was clearly necessary to control the disease, and options were extremely limited, but it's unfortunate that attention and resources were diverted from routine health services such as childhood vaccination," Takahashi said.

Saad Omer, an Emory University associate professor of global health, epidemiology and pediatrics, said that the report importantly puts a number on the extent to which diseases such as measles can proliferate after a crisis.

"It's very useful in highlighting that when we have these kind of outbreaks there are other consequences," said Omer, who is familiar with the work but had no role in it. "It quantifies these potential consequences and highlights the need for focusing beyond the pathogen du jour."

These pathogenic consequences — be they due to an outbreak, natural disaster or war — are especially important to consider in poor nations with weaker health-care infrastructures, Omer said. The incidences of outbreaks following a societal trauma are established, he said. In Pakistan, for instance, polio cases jumped following severe floods in 2010 that displaced millions of people and disrupted vaccination campaigns.

"We have to be cognizant of these external events socking weak or fragile health systems and having these other consequences," Omer said. "If you have actual numbers, people tend to pay a lot more attention. This paper will help make the situation a little bit more real for a lot of people."

The researchers focused on measles because it is a well-known consequence of upheaval, said the report's second author Jessica Metcalf, a Princeton assistant professor of ecology and evolutionary biology and public affairs.

"Measles tends to follow humanitarian crises," Metcalf said. "Our work is significant in that it describes the scope of the measles susceptibility problem in Ebola-affected regions. Ideally, this will aid governments and nongovernmental organizations to focus their resources on restarting vaccination programs."

Co-authors of the report include Matthew Ferrari, an assistant professor of biology at Pennsylvania State University; William Moss, a Johns Hopkins professor of infectious disease epidemiology; Shaun Truelove, a doctoral student in infectious disease epidemiology at Johns Hopkins; Andrew Tatem, an associate professor of environmental sciences at the University of Southampton in the U.K.; and Bryan Grenfell, Princeton's Kathryn Briger and Sarah Fenton Professor of Ecology and Evolutionary Biology and Public Affairs.

The researchers mapped the distribution of the estimated 778,000 children aged 9 months (the age when the measles vaccine can be administered) to 5 years in Guinea, Liberia and Sierra Leone who had not been vaccinated against measles before the Ebola outbreak. They then projected how those numbers would increase up to 18 months after Ebola struck an area.

Based on surveys from health-care providers, the researchers assumed that vaccinations against measles decreased 75 percent after the onset of Ebola (they also ran calculations for reductions of 25, 50 and 100 percent). This meant that for each month that a health-care system was in turmoil over Ebola, an average of more than 19,500 additional children went unprotected from measles.

In the end, a measles outbreak in Guinea, Liberia and Sierra Leone before the Ebola crisis would have resulted in between 84,000 and 181,000 cases. By the researchers' calculations, 18 months of health-care disruptions increases those numbers to between 153,000 and 321,000 cases with approximately 2,000 to 16,000 additional deaths. 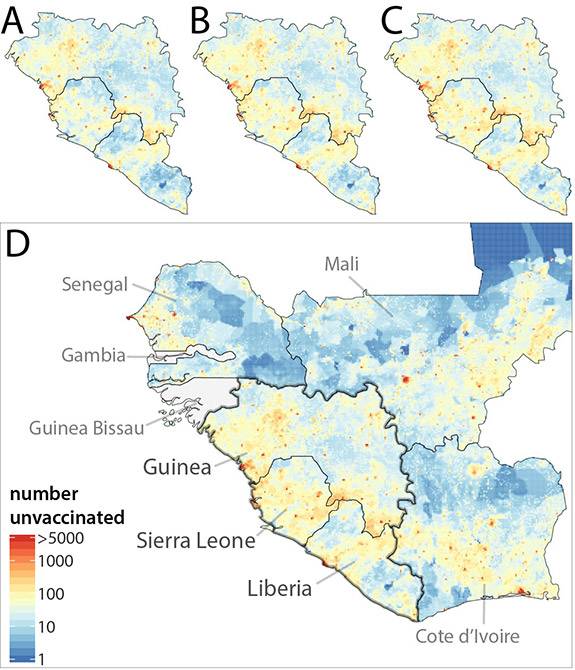 The researchers mapped the distribution of the estimated 778,000 children aged 9 months to 5 years in Guinea, Liberia and Sierra Leone who had not been vaccinated against measles before the Ebola outbreak (A). Based on surveys from health-care providers, the researchers assumed that vaccinations against measles decreased 75 percent after the onset of Ebola. They then projected how the numbers of children unvaccinated against measles would increase 6 months (B), 12 months (C) and 18 months (D) after Ebola. Panel D includes the pre-Ebola distribution of measles-unvaccinated children in neighboring countries, which would be vulnerable to measles epidemics in Guinea, Liberia or Sierra Leone. (Image courtesy of Science/AAAS)

The researchers used data from the national measles surveillance systems, administrative reports to the World Health Organization, and Demographic and Health Surveys, which include information such as where people live and if their children are vaccinated for measles. They also used data from the WorldPop project, which is directed by Tatem and provides high-resolution geographic data on birth rates and population size.

Takahashi plans to expand these techniques to incorporate environmental and epidemiological characteristics to better understand the global landscape of disease susceptibility, she said.

"Measles vaccination provides life-long protection, and improving our understanding of inequities in vaccination coverage to help target control efforts is a key direction for reducing the burden of this disease in vulnerable communities," she said.

The upcoming Princeton-Fung Global Forum hosted by Princeton and to be held Nov. 2-3, 2015, in Dublin, Ireland, will focus on the current Ebola crisis as a critical case study of a modern plague.

The paper, "Reduced vaccination and the risk of measles and other childhood infections post-Ebola," was published online March 12 by Science.