Tracking mobile phone data is often associated with privacy issues, but these vast datasets could be the key to understanding how infectious diseases are spread seasonally, according to a study published in the Proceedings of the National Academy of Sciences.

Princeton University and Harvard University researchers used anonymous mobile phone records for more than 15 million people to track the spread of rubella in Kenya and were able to quantitatively show for the first time that mobile phone data can predict seasonal disease patterns.

Harnessing mobile phone data in this way could help policymakers guide and evaluate health interventions like the timing of vaccinations and school closings, the researchers said. The researchers' methodology also could apply to a number of seasonally transmitted diseases such as the flu and measles. 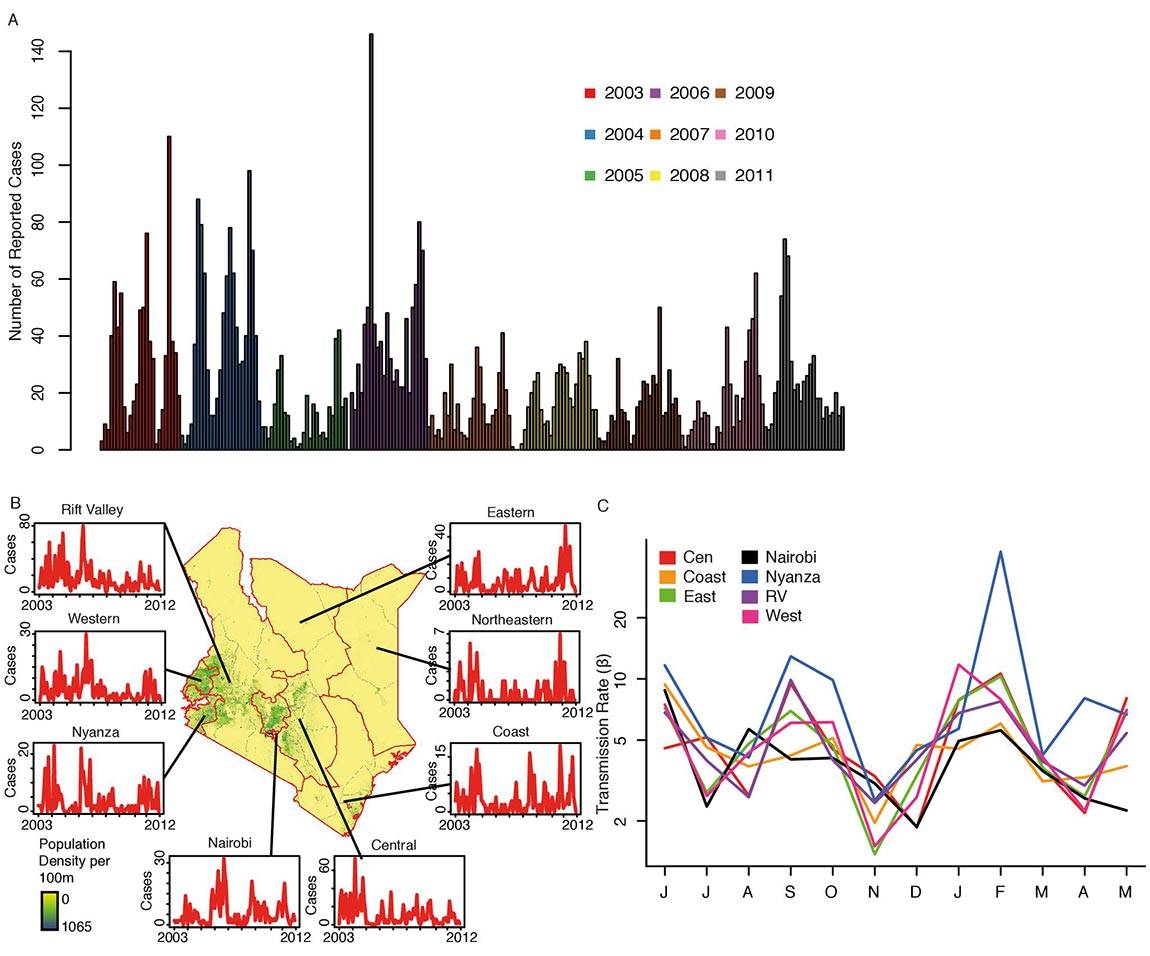 These images were created based on both mobile phone data and rubella incidence figures. Section A indicates the rubella patterns in Kenya from 2003 to 2011. Section B shows a map of Kenya with provinces outlined in red along with the rubella case data per province. Section C shows the monthly transmission estimates per province. In the majority of provinces, the researchers found two pronounced peaks in transmission during September and January-March with a number of locations peaking in May. (Photo courtesy of Amy Wesolowski, Harvard T.H. Chan School of Public Health; and C. Jessica Metcalf, Department of Ecology and Evolutionary Biology and Woodrow Wilson School of Public and International Affairs, Princeton University)

"One of the unique opportunities of mobile phone data is the ability to understand how travel patterns change over time," said lead author C. Jessica Metcalf, assistant professor of ecology and evolutionary biology and public affairs at Princeton's Woodrow Wilson School of Public and International Affairs. "And rubella is a well-known seasonal disease that has been hypothesized to be driven by human population dynamics, making it a good system for us to test."

"The potential of mobile phone data for quantifying mobility patterns has only been appreciated in the last few years, with methods pioneered by authors on this paper," said lead author Amy Wesolowski, a postdoctoral fellow at Harvard's School of Public Health. "It is a natural extension to look at seasonal travel using these data."

In the past, it was difficult to collect data on individuals in low-income and undeveloped countries due to a lack of technology usage. But mobile phone ownership, especially in these areas, is rapidly increasing, producing large and complex datasets on millions of people. Because of the mobility of cellphones, it is possible that phone records could predict certain health-related patterns. This spurred the researchers to take a closer look.

Ultimately, the research team wanted to see whether cellphone users and their movement around the country could predict the seasonal spread of rubella. The researchers used available records to analyze mobile phone usage and movement between June 2008 and June 2009 for more than 15 million cellphone users in Kenya. (Note: February 2009 was missing from the dataset.)

Using the location of the routing tower and the timing of each call and text message, the researchers were able to determine a daily location for each user as well as the number of trips these users took between the provinces each day. In total, more than 12 billion mobile phone communications were recorded anonymously and linked to a province.

The researchers then compared the cellphone analysis with a highly detailed dataset on rubella incidence in Kenya. They matched; the cellphone movement patterns lined up with the rubella incidence figures. In both of their analyses, rubella spiked three times a year: September and February primarily, and, in a few locations, rubella peaked again in May. This showed the researchers that cellphone movement can be a predictor of infectious-disease spread. 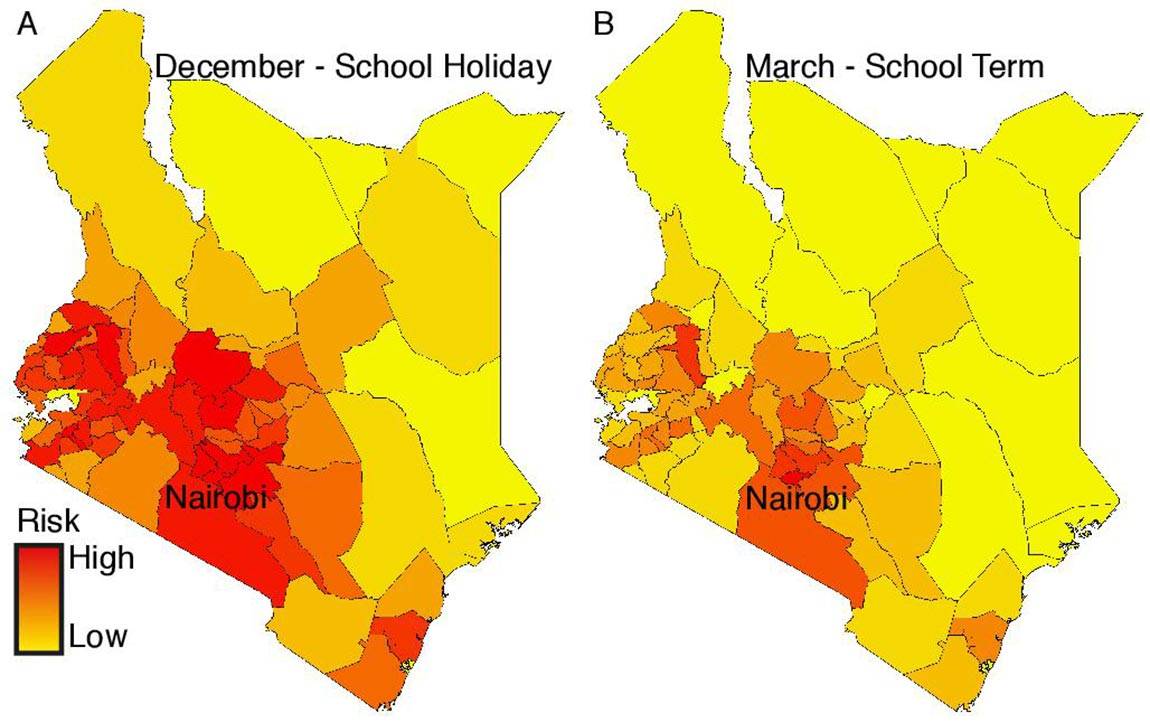 Using mobile phone data, the researchers constructed these maps to characterize rubella fluxes across the country. Section A shows the risk of rubella during a major holiday and school term break. Section B shows the risk of rubella while school is in session. Most provinces have lower risks during the school year with higher outbreak rates during breaks and holidays. (Photo courtesy of Amy Wesolowski, Harvard T.H. Chan School of Public Health; and C. Jessica Metcalf, Department of Ecology and Evolutionary Biology and Woodrow Wilson School of Public and International Affairs, Princeton University)

Overall, the results were in line with the researchers' predictions; rubella is more likely to spread when children interact with one another at school at the start of school and after holiday breaks. Across most of the country, this risk then decreases throughout the rest of the school-term months. (The only anomaly was in Western Kenya where the risk during school breaks was relatively higher than when school was in session; the data were insufficient to clearly indicate why.)

"Our analysis shows that mobile phone data may be used to capture seasonal human movement patterns that are relevant for understanding childhood infectious diseases," Metcalf said. "In particular, phone data can describe within-country movement patterns on a large scale, which could be especially helpful for localized treatment."

The results highlight how mobile phone data could be a powerful tool for understanding the critical drivers of epidemics. The researchers hope to next apply their methodology to measles and other infections shaped by human movement like malaria and cholera.

Additional co-authors include Bryan Grenfell, Princeton's Kathryn Briger and Sarah Fenton Professor of Ecology and Evolutionary Biology and Public Affairs; Nathan Eagle and Caroline Buckee from the Harvard School of Public Health; Janeth Kombich from the University of Kabianga in Kenya; Ottar Bjornstad from Pennsylvania State University; Justin Lessler from Johns Hopkins Bloomberg School of Public Health; and Andrew Tatem from the University of Southampton in the United Kingdom.