Normally used to spot where people live, satellite images of nighttime lights can help keep tabs on the diseases festering among them, too, according to new research.

Princeton University-led researchers report in the journal Science Dec. 9 that nighttime-lights imagery presents a new tool for pinpointing disease hotspots in developing nations by revealing the population boom that typically coincides with seasonal epidemics. In urban areas with migratory populations, the images can indicate where people are clustering by capturing the expansion and increasing brightness of lighted areas. The researchers found the technique accurately indicates fluctuations in population density — and thus the risk of epidemic — that can elude current methods of monitoring outbreaks.

The team used nighttime images of the three largest cities in the West African nation of Niger to correlate seasonal population growth with the onset of measles epidemics during the country's dry season, roughly from September to May. The images, taken between 2000 and 2004 by a U.S. Department of Defense satellite used to obtain night-light data, were compared to records from Niger's Ministry of Health of measles cases from the same years. The team found that measles cases were most prevalent when a city's lighted area was largest and brightest. 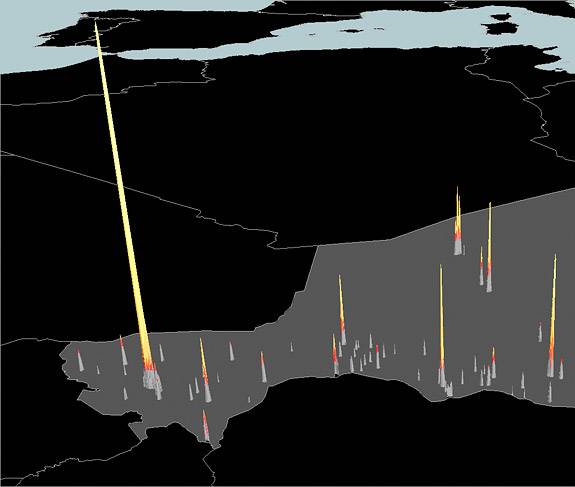 A team led by Princeton University researchers found that satellite images of nighttime lights can be used to pinpoint disease hotspots in developing nations by revealing the boom in population density that typically coincides with seasonal epidemics. The researchers correlated increases in brightness in three cities in Niger with the onset of seasonal measles epidemics. Measles cases in Niger spike in the September to May dry season as people migrate to urban areas from the agricultural countryside. A three-dimensional rendering shows the amount of brightness for urban areas in Niger over the course of an average year, with the height of each spike representing total brightness (the color gradient is for emphasis). The three tallest spikes indicate the cities the researchers studied: from left, Niamey, Niger's capital and largest city; Maradi; and Zinder. (Image by Science/AAAS)

Lead author Nita Bharti, a Princeton postdoctoral researcher in the Department of Ecology and Evolutionary Biology and the Woodrow Wilson School of Public and International Affairs, explained that people in nations such as Niger commonly migrate from rural to urban areas after the growing season. As people gather in cities during the dry-season months when agricultural work is unavailable, these urban centers frequently become host to outbreaks of crowd-dependent diseases such as measles and meningitis.

Migratory populations are notoriously difficult to track, Bharti said, which can amplify the difficulty and complexity of carrying out large-scale vaccinations. She and her co-authors found, however, that monitoring changes in nighttime lights clearly indicates where and when a population is expanding and where an epidemic would most likely occur.

"Once you establish the patterns of epidemics, you can adjust your intervention strategy," Bharti said. "We turned to this technique because there is really no other way to get any idea of how populations are changing in a place like Niger. That's true throughout most of sub-Saharan Africa and a lot of other places in the world.

"This method isn't limited to understanding measles — think about malaria or meningitis," Bharti said. "These diseases are geographically specific, for the most part, to areas where this would be a useful technique. These are places that are not so industrialized that they will always be saturated with brightness and where there may be some level of agricultural dependence so that there are detectable labor migrations."

Bharti, who works in the lab of co-author Bryan Grenfell, a Princeton professor of ecology and evolutionary biology and public affairs, also worked with second author Andrew Tatem, a geography professor at the University of Florida; Matthew Ferrari, a biology professor at Pennsylvania State University; Rebecca Grais, an epidemiologist with Epicentre, the Paris-based research branch of Doctors Without Borders; and Ali Djibo of the Niger Ministry of Health. 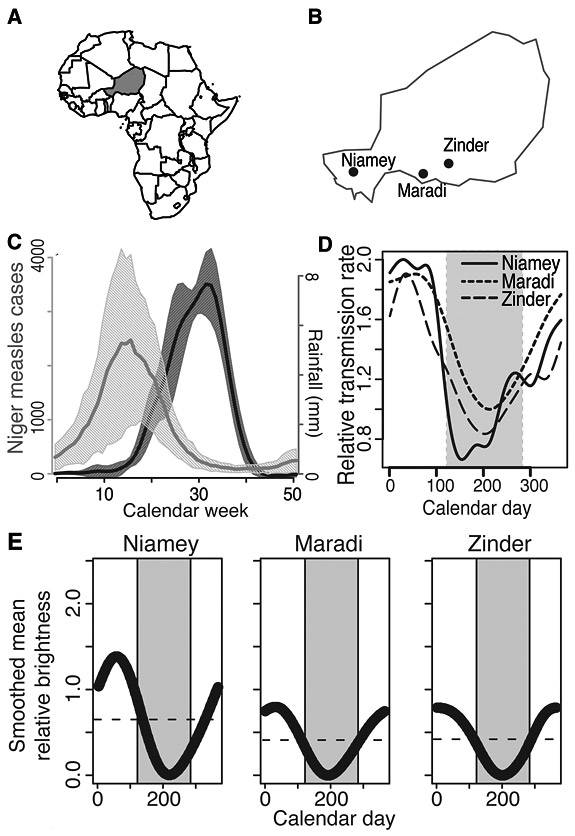 From 1995 to 2004, measles outbreaks in Niger (C, light-shaded area) spiked in the dry season. Satellite imagery of nighttime lights suggests that changes in population density contributed to the epidemics, rather than weather-related factors such as the rainy season (dark-shaded area). The researchers studied measles and nighttime-lights data from 2000 to 2004, the years in which the two datasets overlap. Measles cases in the three cities studied (D) followed the same pattern as the nighttime brightness (E) the researchers observed for each city, with transmission rates and brightness highest during the September to May dry season and lowest during the mid-year rainy season (shaded area on both datasets). (Image by Science/AAAS)

The trouble with tracking migratory populations

Deborah Balk, a professor at the City University of New York and associate director of the university's Institute for Demographic Research, said the researchers' use of city-scale nighttime-lights imagery to examine the spread of disease is "pathbreaking" and offers significant advantages over more common techniques.

Images of nighttime lights have typically been used to study urbanization and economic development, as well as physical-science questions, said Balk, who is familiar with the project but had no role in it. In this case, Bharti and her collaborators use the nighttime brightness data to illustrate seasonal population swings, information that other types of satellite data such as images of housing density cannot detect, she said.

"Temporary and seasonal migrants are very hard to measure," Balk said. "The night lights are an important source of data for Africa and Asia, especially, where data is sometimes absent or quite poor."

Pej Rohani, a University of Michigan professor who studies infectious disease ecology and evolution, said that responses to epidemics are more complicated in areas with migratory or unstable populations. Rohani said that he was unaware of any other application of nighttime imagery to epidemics.

"If you're thinking about a city with hundreds of thousands or millions of people, how can you know at any one time how many people are in the city, which is why these kind of proxy measures are clever and useful," said Rohani, who is familiar with the research but also had no role in it.

Beyond providing a unique method to gauge population density, Rohani said the Princeton-led project also is notable for the unusually clear relationship it shows between outbreaks and shifts in population density in the first place.

"Traditionally, we've been having to make inferences about what determines the patterns of seasonality we see in disease outbreaks," Rohani said. "The beauty of this study is that they were able to dissect with great precision how the presence of susceptible individuals in the population correlates with and determines the growth rate of the epidemic."

The difficulty of the project and the fact that night-lights data are largely associated with long-term studies of stable populations could explain why nighttime satellite images have not previously been used to gather information about short-term events such as epidemics, Bharti said.

"Nighttime imagery is used as a tool to look at stable populations, which is the opposite of what we used it for," Bharti said. "Setting up this latest project was very labor-intensive. The idea of applying nighttime-lights data in this way is somewhat unconventional, so there was no previous research for us to work from."

The work stems from a longtime effort in Grenfell's lab to understand seasonal measles epidemics in Niger. In 2010, Bharti published a paper with Djibo, Grenfell, Grais and lead author Ferrari, as well as Penn State entomology professor Ottar Bjornstad, reporting that measles epidemics in Niger only occur during the dry season and that an outbreak's severity is related to an area's population.

Thus, the researchers concluded, these events are likely the result of population shifts, rather than environmental factors such as rainfall. But without an accurate method for measuring population movement and changes in density, they could not test their hypothesis, Bharti said.

The project reported in Science is intended to provide such a method. The researchers selected nighttime images clear of excess light pollution and obscuring weather from several hundred photos captured between 2000 and 2004 by the Defense Meteorological Satellite Program's Operational Linescan System, operated by the U.S. Department of Defense. Those images were compared to records from Niger's Ministry of Health of weekly measles outbreaks during the same years in the country's three largest cities: Maradi, Zinder and the capital, Niamey.

Seasonal brightness for all three cities changed similarly, the researchers report. Brightness was below average for each city during the agriculturally busy rainy season, then rose to above average as people packed urban areas during the dry season. Measles transmission rates followed the same pattern — low in the rainy season, high in the dry.

The relationship between brightness and measles transmission appeared even clearer at the local level, as did the potential value of the researchers' technique in providing medical treatment. In Niamey, measles cases were recorded daily for three districts, or communes, during the 2003-04 dry season. Brightness and measles infection both peaked early in the first and second communes in February and March of 2004.

A two-week mass-vaccination campaign was launched in March and April, but population density, as determined by light brightness, had already started to decline in communes 1 and 2, the Princeton-led team found. This means that because the vaccination was not synchronized with population-density increases in communes 1 and 2, large numbers of people in those districts may have left the city without receiving the measles vaccine, Bharti said.

Under similar circumstances, the researchers write, measurements of population density determined by nighttime imagery — which can be ready to analyze within 48 hours of the satellite collecting the data — could be used to help coordinate preventative and reactive treatment with periods when the most people are arriving or are present in a certain area.

Rohani said that the technique could become important in predicting the peak of measles outbreaks in other susceptible countries, but might also apply to other diseases that, like measles, are driven by population density more than any other factor.

"This is probably the most careful dissection of an epidemic of measles in any setting I'm aware of — it's very careful work that provides a mechanistic explanation for the progression of measles in a large population," he said. "It also shows promise for understanding seasonality in places like Niger for other directly transmitted infectious diseases like meningococcal infections or pertussis, or maybe influenza."

The researchers also are exploring the use of nighttime lights with other large-scale population-tracking methods such as the monitoring of mobile-phone usage. When used alone, both methods have their shortcomings, Bharti said. Nighttime lights imagery is susceptible to weather conditions, while mobile-phone usage data is biased in the portion of the population it can represent, she said. Bharti and her co-authors hope that when nighttime imagery is combined with other techniques, the measures will be complementary.

In addition, Bharti said, the team is looking at uses for nighttime satellite data outside of epidemiology that also involve mass migration, such as tracking population displacement during a war or following a natural disaster.

"We now have a technique that allows us to observe and measure changes in population density," Bharti said. "This short-term use of nighttime lights data could apply to a number of different situations beyond seasonal migrations and infectious diseases, such as humanitarian and disaster aid. We're excited about the potential this method has for other important global health issues. "

The research was supported by the Bill and Melinda Gates Foundation.