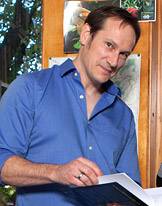 Princeton University researchers led by Peter Andolfatto (above), an assistant professor of ecology and evolutionary biology and the Lewis-Sigler Institute for Integrative Genomics, found that evolution may be driven by a simple and repeated genetic solution to an environmental pressure that a broad range of species happen to share. This means that scientists with knowledge of how certain external conditions affect the proteins encoded by a species' genes could pinpoint how the diverse adaptations seen in the natural world developed even in distantly related animals.


Evolution, often perceived as a series of random changes, might in fact be driven by a simple and repeated genetic solution to an environmental pressure that a broad range of species happen to share, according to new research.

Princeton University research published in the journal Science suggests that knowledge of a species' genes — and how certain external conditions affect the proteins encoded by those genes — could be used to determine a predictable evolutionary pattern driven by outside factors. Scientists could then pinpoint how the diversity of adaptations seen in the natural world developed even in distantly related animals. 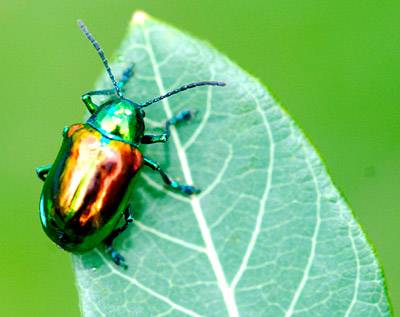 The Princeton researchers sequenced the expression of a poison-resistant protein in insect species that feed on plants such as milkweed and dogbane that produce a class of steroid-like cardiotoxins called cardenolides as a natural defense. The insects surveyed spanned three orders: butterflies and moths (Lepidoptera); beetles and weevils (Coleoptera); and aphids, bed bugs, milkweed bugs and other sucking insects (Hemiptera). Above: Dogbane beetle (Photo courtesy of Peter Andolfatto)

"Is evolution predictable? To a surprising extent the answer is yes," said senior researcher Peter Andolfatto, an assistant professor in Princeton's Department of Ecology and Evolutionary Biology and the Lewis-Sigler Institute for Integrative Genomics. He worked with lead author and postdoctoral research associate Ying Zhen, and graduate students Matthew Aardema and Molly Schumer, all from Princeton's ecology and evolutionary biology department, as well as Edgar Medina, a biological sciences graduate student at the University of the Andes in Colombia.

The researchers carried out a survey of DNA sequences from 29 distantly related insect species, the largest sample of organisms yet examined for a single evolutionary trait. Fourteen of these species have evolved a nearly identical characteristic due to one external influence — they feed on plants that produce cardenolides, a class of steroid-like cardiotoxins that are a natural defense for plants such as milkweed and dogbane.

Though separated by 300 million years of evolution, these diverse insects — which include beetles, butterflies and aphids — experienced changes to a key protein called sodium-potassium adenosine triphosphatase, or the sodium-potassium pump, which regulates a cell's crucial sodium-to-potassium ratio. The protein in these insects eventually evolved a resistance to cardenolides, which usually cripple the protein's ability to "pump" potassium into cells and excess sodium out. 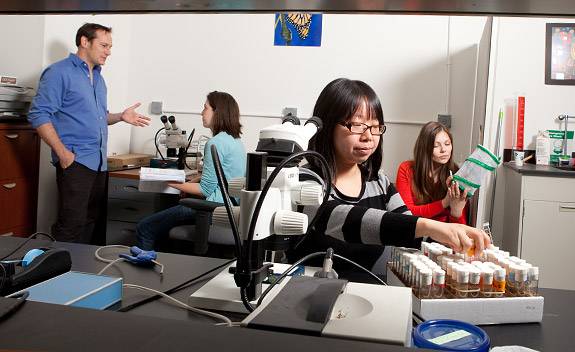 Lead author Ying Zhen (foreground), Andolfatto (far left), fourth author and graduate student Molly Schumer (near left), and their co-authors sequenced and assembled all the expressed genes in 29 distantly related insect species, the largest sample of organisms yet examined for a single evolutionary trait. They used these sequences to predict how a certain protein would be encoded in the genes of 14 distantly related species that evolved a similar resistance to toxic plants. Similar techniques could be used to trace protein changes in a species' DNA to understand how many diverse organisms evolved as a result of environmental factors. At right is research assistant Ilona Ruhl, who was not involved in the research. (Photo by Denise Applewhite)

Andolfatto and his co-authors first sequenced and assembled all the expressed genes in the studied species. They used these sequences to predict how the sodium-potassium pump would be encoded in each of the species' genes based on cardenolide exposure.

Scientists using similar techniques could trace protein changes in a species' DNA to understand how many diverse organisms evolved as a result of environmental factors, Andolfatto said. "To apply this approach more generally a scientist would have to know something about the genetic underpinnings of a trait and investigate how that trait evolves in large groups of species facing a common evolutionary problem," Andolfatto said.

"For instance, the sodium-potassium pump also is a candidate gene location related to salinity tolerance," he said. "Looking at changes to this protein in the right organisms could reveal how organisms have or may respond to the increasing salinization of oceans and freshwater habitats."

Jianzhi Zhang, a University of Michigan professor of ecology and evolutionary biology, said that the Princeton-based study shows that certain traits have a limited number of molecular mechanisms, and that numerous, distinct species can share the few mechanisms there are. As a result, it is likely that a cross-section of certain organisms can provide insight into the development of other creatures, he said.

"The finding of parallel evolution in not two, but numerous herbivorous insects increases the significance of the study because such frequent parallelism is extremely unlikely to have happened simply by chance," said Zhang, who is familiar with the study but had no role in it.

"It shows that a common molecular mechanism is used by many different insects to defend themselves against the toxins in their food, suggesting that perhaps the number of potential mechanisms for achieving this goal is very limited," he said. "That many different insects independently evolved the same molecular tricks to defend themselves against the same toxin suggests that studying a small number of well-chosen model organisms can teach us a lot about other species. Yes, evolution is predictable to a certain degree."

Andolfatto and his co-authors examined the sodium-potassium pump protein because of its well-known sensitivity to cardenolides. In order to function properly in a wide variety of physiological contexts, cells must be able to control levels of potassium and sodium. Situated on the cell membrane, the protein generates a desired potassium to sodium ratio by "pumping" three sodium atoms out of the cell for every two potassium atoms it brings in.

Cardenolides disrupt the exchange of potassium and sodium, essentially shutting down the protein, Andolfatto said. The human genome contains four copies of the pump protein, and it is a candidate gene for a number of human genetic disorders, including salt-sensitive hypertension and migraines. In addition, humans have long used low doses of cardenolides medicinally for purposes such as controlling heart arrhythmia and congestive heart failure. 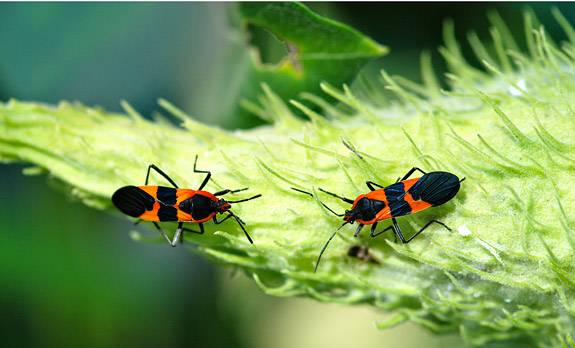 The Princeton researchers used the DNA microarray facility in the University's Lewis-Sigler Institute for Integrative Genomics to sequence the expression of the sodium-potassium pump protein in insect species spanning three orders: butterflies and moths (Lepidoptera); beetles and weevils (Coleoptera); and aphids, bed bugs, milkweed bugs and other sucking insects (Hemiptera).

The researchers found that the genes of cardenolide-resistant insects incorporated various mutations that allowed it to resist the toxin. During the evolutionary timeframe examined, the sodium-potassium pump of insects feeding on dogbane and milkweed underwent 33 mutations at sites known to affect sensitivity to cardenolides. These mutations often involved similar or identical amino-acid changes that reduced susceptibility to the toxin. On the other hand, the sodium-potassium pump mutated just once in insects that do not feed on these plants.

Significantly, the researchers found that multiple gene duplications occurred in the ancestors of several of the resistant species. These insects essentially wound up with one conventional sodium-potassium pump protein and one "experimental" version, Andolfatto said. In these insects, the newer, hardier versions of the sodium-potassium pump are mostly expressed in gut tissue where they are likely needed most.

"These gene duplications are an elegant solution to the problem of adapting to environmental changes," Andolfatto said. "In species with these duplicates, the organism is free to experiment with one copy while keeping the other constant, avoiding the risk that the new version of the protein will not perform its primary job as well."

The researchers' findings unify the generally separate ideas of what predominately drives genetic evolution: protein evolution, the evolution of the elements that control protein expression or gene duplication. This study shows that all three mechanisms can be used to solve the same evolutionary problem, Andolfatto said.

Central to the work is the breadth of species the researchers were able to examine using modern gene sequencing equipment, Andolfatto said.

"Historically, studying genetic evolution at this level has been conducted on just a handful of 'model' organisms such as fruit flies," Andolfatto said. "Modern sequencing methods allowed us to approach evolutionary questions in a different way and come up with more comprehensive answers than had we examined one trait in any one organism.

"The power of what we've done is to survey diverse organisms facing a similar problem and find striking evidence for a limited number of possible solutions," he said. "The fact that many of these solutions are used over and over again by completely unrelated species suggests that the evolutionary path is repeatable and predictable."

The paper, "Parallel Molecular Evolution in an Herbivore Community," was published Sept. 28 by Science. The research was supported by grants from the Centre for Genetic Engineering and Biotechnology, the National Science Foundation and the National Institutes of Health.