Seemingly redundant portions of the fruit fly genome may not be so redundant after all.

New findings from a Princeton-led team of researchers suggest that repeated instructional regions in the flies' DNA may contribute to normal development under less-than-ideal growth conditions by making sure that genes are turned on and off at the appropriate times. If similar regions are found in humans, they may hold important clues to understanding developmental disorders.

The research results, published in the July 22 issue of the journal Nature, add to the growing body of evidence that so-called "junk DNA" is anything but rubbish. The term "junk DNA" is commonly used to describe the portion of the genome that doesn't contain genes, which are pieces of DNA that code for the production of proteins and other molecules that have specific functions. The noncoding region is often surprisingly large; in humans, some 98 percent of the genome merits "junk" status. But according to David Stern, a Princeton professor in the Department of Ecology and Evolutionary Biology, scientists increasingly believe "junk DNA" is crucial for turning the information encoded in genes into useful products.

"Over the past 10 to 20 years, research has shown that instructional regions outside the protein-coding region are important for regulating when genes are turned on and off," said Stern, the senior scientist on the paper. "Now we're finding that additional copies of these genetic instructions are important for maintaining stable gene function even in a variable environment, so that genes produce the right output for organisms to develop normally."

Stern, along with Nicolás Frankel, a postdoctoral research fellow at Princeton, and their collaborators focused their attention on instructional regions called enhancers. These regions play an important role in the process by which information encoded in genes is used to direct the synthesis of the proteins that make an organism what it is -- be it a fly, a mouse or a human.

"To interpret and fully understand the genome, we need to think of it from an ecological and evolutionary perspective," Stern said. "Its purpose is to produce a healthy organism in a variable environment, so a good portion of it has evolved to deal with contingencies that organisms will experience in the real world."

When enhancers were first discovered, scientists believed that they always were located in close proximity to the target genes that they regulate. Distances in DNA are measured in base pairs, which are the building blocks that make up the DNA molecule (for comparison, the entire fruit fly genome contains about 130 million base pairs, while the human genome has more than 3 billion). Until recently, enhancers were thought always to exist within about 1,000 base pairs from their target genes.

But in 2008, the University of California-Berkeley's Michael Levine reported the discovery of secondary enhancers for a particular fruit fly gene that were located much farther away from the target genes and from the previously discovered enhancers that were located adjacent to the gene.

Levine's team called the apparently redundant copies in distant genetic realms "shadow enhancers" and hypothesized that they might serve to make sure that genes are expressed normally, even if development is disturbed. Factors that might induce developmental disturbances include environmental conditions, such as extreme temperatures, and internal factors, such as mutations in other genes.

Stern and his team put Levine's hypothesis to the test by studying a fruit fly gene that codes for the production of tiny hair-like projections on the insect's body, which are called trichomes. The gene, known as shavenbaby, takes its name from the fact that flies with a mutated copy of the gene are nearly hairless. Stern previously led a research effort that identified three primary enhancers for shavenbaby. In the new research, his team discovered two shadow enhancers for shavenbaby, located more than 50,000 base pairs away from the gene.

In their experiments, the researchers deleted these two shadow enhancers, leaving the primary enhancers in place, and observed developing fly embryos under a range of temperature conditions. At optimal temperatures for fruit fly development -- around 25 degrees Celsius, or a comfortable 77 degrees Fahrenheit -- the embryos without shadow enhancers had only very slight defects in their trichomes. But the results were very different when the researchers observed embryos that developed at temperatures close to the extremes at which developing fruit flies can survive -- 17 degrees Celsius, or 63 degrees Fahrenheit, on the low end and 32 degrees Celsius, or 90 degrees Fahrenheit, at the upper limit. These flies without shadow enhancers developed with severe deficiencies in the number of trichomes produced.

"These results indicate that the genetic instructions that seemed dependable at optimal temperatures were just not up to the task in other conditions," Stern said. 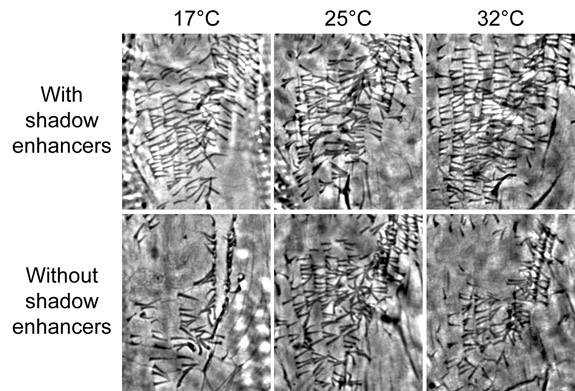 In research that suggests that so-called “junk DNA” may help organisms overcome adverse growth conditions, a Princeton research team focused on redundant instructional regions in the fruit fly genome known as shadow enhancers. Experiments with shadow enhancers that influence the production of hair-like projections, which are called trichomes, on the bodies of fruit flies showed that, when the researchers deleted these redundant DNA snippets and observed developing fly embryos, flies without shadow enhancers developed with only very slight defects in their trichomes under ideal conditions -- 25 degrees Celsius, or 77 degrees Fahrenheit. But at more extreme temperatures -- pushing the limits of those at which developing fruit flies can survive -- the researchers found that flies without shadow enhancers had severe deficiencies in their trichomes. (Image: Courtesy of Nicolás Frankel and David Stern)

To test internal factors affecting developmental deficiencies, the team also investigated what would happen if the secondary enhancers for the shavenbaby gene were removed from fruit fly embryos that had a mutation in another gene involved in trichome development. They found that trichome formation in the mutants was significantly more impaired when the shadow enhancers were absent. Along with the findings of the temperature experiment, the results support the hypothesis that shadow enhancers make developing embryos more robust to both environmental and genetic variation.

The work has important implications for the design of future experiments, which are often conducted in the lab under ideal conditions for the growth of the study organisms. While conducive for proper development, these experimental set-ups may mask the significant role shadow enhancers play to ensure normal development. Future studies of development could explore less optimal settings.

"Backup regulatory DNAs, also called shadow enhancers, ensure the reliable activities of essential genes such as shavenbaby even under adverse conditions, such as increases in temperature," Levine said. "If Dr. Stern and his associates had not examined the activities of shavenbaby under such conditions, then the shadow enhancers might have been missed since they are not needed when fruit flies are grown at optimal culturing conditions in the laboratory."

To date, shadow enhancers have been discovered for numerous genes in fruit flies and mice. Many scientists, including Stern and Levine, believe similarly redundant instructional regions are pervasive in the human genome. If this is found to be true, it could have important implications for understanding a wide range of developmental disorders and explaining why some people with certain genetic mutations develop a given condition while others do not. The presence of shadow enhancers could be one of the determining factors in this "genetic lottery."

In addition to Frankel and Stern, Princeton researchers on the team included senior research specialist Shu Wang in ecology and evolutionary biology and Diego Vargas, a member of Princeton's undergraduate class of 2011. The team also included biologist Gregory Davis of Bryn Mawr College and François Payre of the University of Toulouse and Centre National de la Recherche Scientifique in France. The research was supported by the Howard Hughes Medical Institute, the National Institutes of Health, the National Science Foundation and the Pew Charitable Trusts.