A new study in zebrafish suggests that irregular fluid flow through the spinal column brought on by gene mutations is linked to a type of scoliosis that can affect humans during adolescence. Found in humans and zebrafish, these mutated genes damage the cilia—tiny hair-like projections that line the spinal canal and help move the fluid — and lead to a curvature of the spine.

Researchers from Princeton University and the University of Toronto found that when they repaired the mutated cilia genes, they restored cerebrospinal fluid flow and could prevent spinal curves from developing. If translatable to humans, the study could lead to a non-surgical approach for treating the condition known as idiopathic scoliosis, which has no known cause and affects roughly three out of every 100 adolescents. The research was published June 10 by the journal Science.

"This is the first hint of a biological mechanism for idiopathic scoliosis," said Rebecca Burdine, associate professor of molecular biology at Princeton, and a senior author of the study. "We hope this research will open up new areas of inquiry as to how the disruptions to normal cerebrospinal fluid flow can lead to spinal curvature." 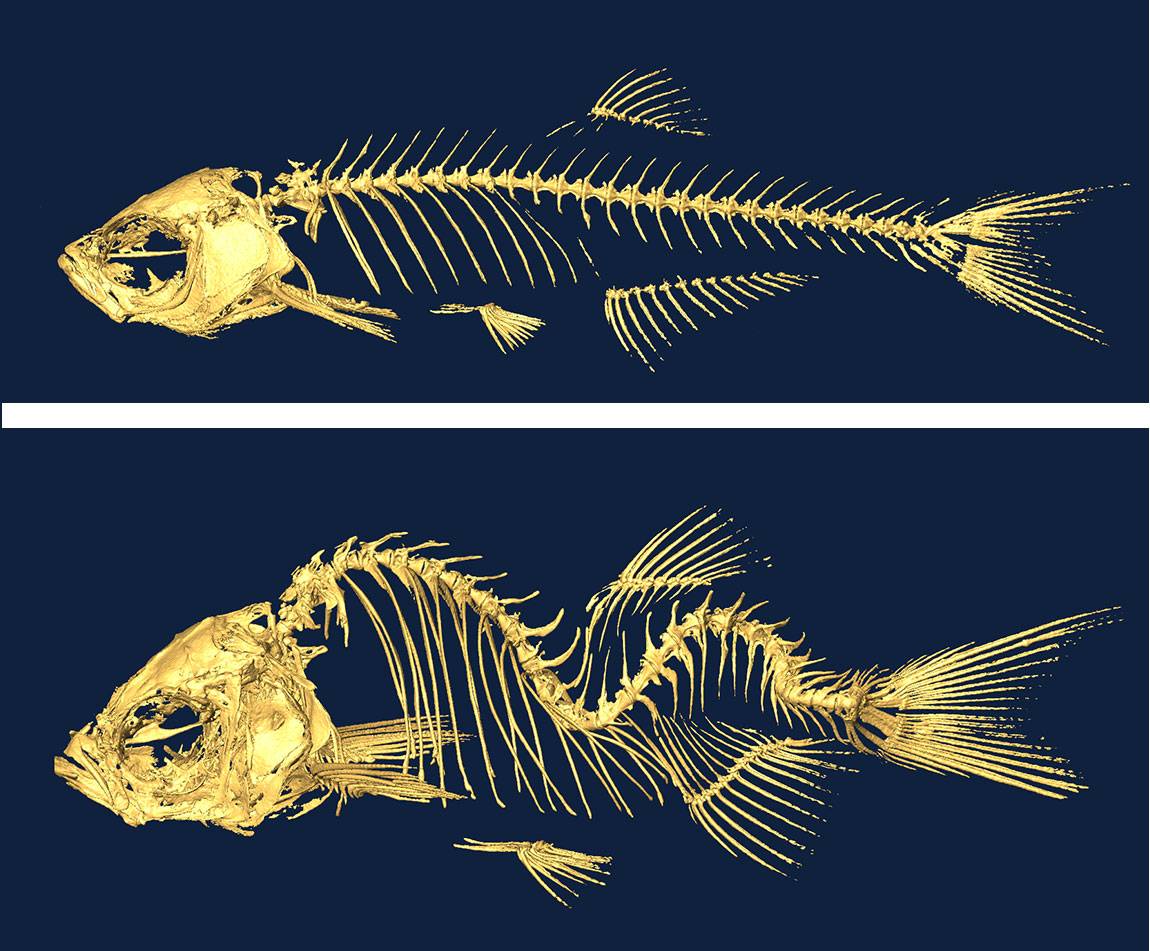 A new study in zebrafish by researchers at Princeton University and the University of Toronto suggests that irregular fluid flow through the spinal column brought on by gene mutations is linked to a type of scoliosis that can affect humans during adolescence. Also found in people, these genes damage the hair-like projections called motile cilia that move fluid through the spinal canal and lead to a curvature of the spine. The researchers used a temperature-sensitive mutation in the gene c21orf59 to induce scoliosis in adolescent zebrafish. The fish develop a normal spine when the mutation is turned off (top panel) but a curved spine when the mutation is on (bottom panel). (Image courtesy of Science/AAAS)

Burdine's lab conducted the study in collaboration with a team led by senior author Brian Ciruna, an associate professor of molecular genetics at the University of Toronto and a senior scientist at the Hospital for Sick Children in Toronto.

"Traditionally, theories regarding the biology behind idiopathic scoliosis have revolved around defects in the bone, cartilage or neuromuscular activity," Ciruna said. "The finding that defects in cerebrospinal fluid flow may be contributing to scoliosis came as a surprise. It is not a theory that had been put out there previously."

The study is the first to link spinal curvature to mutations in genes that govern motile cilia, which stick out from cells and make synchronous whip-like motions to push fluid through narrow passages such as the spinal column.

Hazel Sive, a professor in biology at the Whitehead Institute for Biomedical Research at the Massachusetts Institute of Technology who was not involved in the study, is an expert in the use of zebrafish to study vertebrate development.

"This study is an important step forward in understanding events underlying spinal curvature," Sive said. "In an elegant set of experiments, the authors take advantage of the outstanding zebrafish system to define that cilia function and perhaps cerebrospinal fluid flow is required for normal spinal cord development."

Researchers in the Burdine laboratory had observed that mutant genes that disrupt cilia motility produce spinal curves in zebrafish as adults, although the work had not been published. "I've presented this finding for years, but didn't have a way to link this work to human disease," Burdine said. "Collaborating with Brian's group helped us make this link."

Previous research by Ciruna's lab revealed that mutations in a gene found in zebrafish and humans called protein tyrosine kinase-7 (ptk7) causes spinal curvature during a period of rapid growth that corresponds to adolescence in zebrafish. Published in the journal Nature Communications in 2014, the findings, suggested that the mutant fish could serve as a model for studying the condition. The researchers knew that the ptk7 gene plays a role in helping cells orient in the correct direction during embryonic development, but they didn't know that it also governed the formation of motile cilia.

Researchers studied the flow of cerebrospinal fluid in zebrafish brain regions located at the entrance to the spinal cord using fluorescently tagged beads. In zebrafish with mutations in genes that control the function of motile cilia, the flow exhibited irregular trajectories and reduced speeds (left). Normal zebrafish without mutations in their motile cilia genes had normal fluid flow in the ventricles (right). (Image courtesy of Science/AAAS)

To explore how ptk7 mutations lead to spine curvature in zebrafish, Curtis Boswell, a graduate student at the University of Toronto, examined the brains and spinal cords of fish with mutated ptk7. In brain regions known as ventricles, which sit at the top of the spinal cord, the motile cilia were sparse and malformed and the fish developed a brain-swelling condition called hydrocephalus, which is associated with loss of cilia function. Using fluorescent dyes to track the flow of cerebrospinal fluid through the ventricles, the researchers saw that the flow was irregular and slower than normal.

When the researchers introduced a non-mutated version of the ptk7 gene specifically into tissues harboring motile cilia, the hydrocephalus disappeared, the cerebrospinal fluid began to flow normally and the spine straightened.

"We demonstrated that if we could restore gene function in the motile ciliated tissues, we could restore cerebrospinal fluid flow, and we could actually prevent scoliosis in these mutants," Ciruna said.

The researchers also tested other motile-cilia gene mutations to see whether they disrupt cerebrospinal fluid flow and cause spine curvature. Daniel Grimes, a postdoctoral research associate, and Nicholas Morante, a graduate student, both in the Burdine lab in Princeton's Department of Molecular Biology, studied four such mutations in genes called ccdc40, ccdc151, dyx1c1 and c21orf59. They found that all four gene mutations led to curvature of the spine in zebrafish.

The researchers found that the damage to motile cilia function occurs and leads to the onset of scoliosis during adolescence for zebrafish, a period of rapid growth. They took advantage of the temperature-sensitivity of the mutant c21orf59 gene, which can be switched on or off by controlling temperature. They kept zebrafish embryos at 25 degrees Celsius (77 degrees Fahrenheit), which switches the mutation off, so that the fish didn't develop embryonic defects.

The researchers then moved groups of fish aged 19-, 24-, 29- or 34-days-old to a tank set at 30 degrees Celsius (86 degreees Fahrenheit), which turned the mutation on and stopped cilia-driven spinal fluid flow. The fish that were switched to the warmer tank at 19 days, which corresponds to adolescence, formed spinal curves. However, fish that were shifted to the warmer tank at ages 24 and 29 days respectively developed milder curves, and fish shifted at age 34 days did not develop curves.

"Together with the Burdine group we defined a critical window for motile cilia function and cerebrospinal fluid flow in normal spine development," Ciruna said. "This window appears to be not during embryogenesis and not in adulthood, but specifically when fish are growing rapidly, in other words, fish adolescence."

Additionally, the development of spinal curves in these adolescent fish could be blocked by switching the fish back to the cooler tank. "This provides proof-of-principle that the development of severe idiopathic scoliosis spinal curvatures can be managed without invasive surgical manipulation," the authors wrote in Science.

Several additional lines of evidence point to links between motile cilia dysfunction, cerebrospinal fluid flow disruption and idiopathic scoliosis, Burdine said. For example, individuals with primary ciliary dyskinesia, a rare genetic disorder that causes defects in the movement of cilia lining the respiratory tract, have an elevated risk for scoliosis. Also, scoliosis is prevalent in humans with conditions such as tumors that obstruct cerebrospinal fluid flow.

The next step will be to understand the mechanisms by which disrupted cerebrospinal fluid flow causes the spine to curve, Burdine said.

"Now that we can study idiopathic scoliosis in zebrafish," she said, "we can begin to identify molecular pathways that are involved in spine curvature, and hopefully, find therapeutic targets to address this condition."

The paper, "Zebrafish models of idiopathic scoliosis link cerebrospinal fluid flow defects to spine curvature," was published June 10 by the journal Science. The study was supported in part by funding from the Canada Research Chairs program; the National Institute of Child Health and Development (grant no. 2R01HD048584); the Canadian Institutes of Health Research (MOP-111075); and the March of Dimes Foundation (#1-FY13-398).