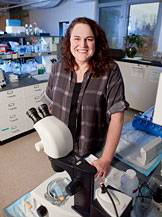 Rebecca Burdine, an assistant professor of molecular biology at Princeton University, led a team at Princeton focused on identifying and studying a gene that controls the symmetry and placement of organs as they develop. The team's work used zebrafish embryos and expanded to include collaborations with other groups studying the genetics of mice and people.

A gene that can cause congenital heart defects has been identified by a team of scientists, including a group from Princeton University. The discovery could lead to new treatments for those affected by the conditions brought on by the birth defect.

Princeton researchers focused on identifying and studying the gene in zebrafish embryos, and the team's work expanded to include collaborations with other groups studying the genetics of mice and people.

"This work really showcases the use of collaborative science and multiple model systems to better understand human disease," said Rebecca Burdine, an assistant professor of molecular biology at Princeton who led her team.

The newly discovered gene, called CCDC40 (for "coiled coil domain containing protein 40"), controls right-to-left patterning as tissues develop, a critical factor in the configuration and effectiveness of organs. Scientists found the gene by zeroing in on zebrafish and mice in which the placement, and sometimes the internal structure, of organs is disrupted or reversed. While these so-called "left-right patterning" defects occur very rarely in zebrafish and mice, they occur at high frequency in the animals with mutated CCDC40 genes. Their study will be published online in Nature Genetics on Dec. 5. A separate paper by another group identifying a sister gene, CCDC39, based on studies of genes in sheepdogs, appears in the same edition of the science journal. 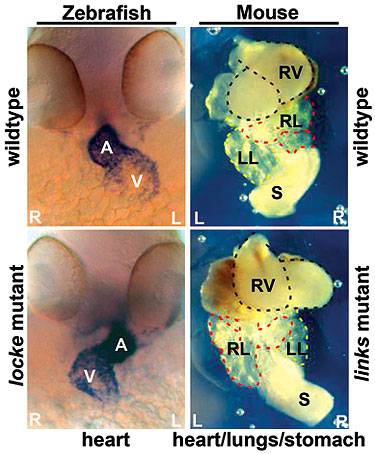 Loss of the gene that produces the protein CCDC40 in zebrafish (identified here as the locke mutant) or mice (links mutant) leads to defects in the asymmetric placement of organs in the body. The organ placement of normal zebrafish and mice are seen in the upper left and right panels. In zebrafish embryos, the heart (dark region in upper left panel) is labeled showing the atrium (A) and the ventricle (V). Similarly, the view in the upper right shows the heart (RV, right ventricle) and other organs, stomach (S) and right and left lungs (RL and LL) in the proper places. The bottom left and right panels illustrate asymmetric placement of organs in zebrafish and mice embryos caused by the mutant gene. (Image courtesy of Rebecca Burdine and Irene Zohn)

"We used the strengths of different model organisms to gain an understanding of how a novel protein, produced by this new gene, functions," said Irene Zohn, who led a research group studying mice genetics at the Children's National Medical Center in Washington, D.C., and is one of the first authors on the CCDC40 study with Burdine's group. A third group, led by physician Heymut Omran and based at University Hospital in Freiburg, Germany, rounded out the team, with other individual participants located elsewhere. "These findings would not have been possible without the collaborations between the three groups," Zohn added.

The collaboration started several years ago when Zohn contacted Burdine, a renowned expert in the study of left-right patterning in animals. Developmental biologists such as Burdine investigate what factors contribute to patterns in vertebrates relating to symmetry and leading to where organs are placed in the spatial configuration of the body. In humans and many animals, for example, the heart is usually situated on the left side with the liver at its lower right. Flaws in left-right patterning can lead to congenital heart defects in humans.

It is estimated that one in 10,000 people have a condition known as situs inversus, when the left-to-right patterning in the body is switched. In most cases, there are no adverse consequences of this condition, but problems arise when perturbations in the patterning signals produce reversals within organs, including heart structures such as the aorta and pulmonary artery. In rare circumstances, the heart can be located on one side without any supporting structures around it such as arteries and veins. That condition can be fatal. 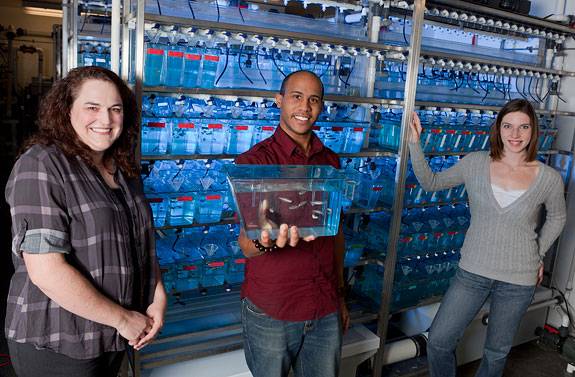 A gene that can cause congenital heart defects has been identified by a team of scientists, including a group from Princeton University. Authors on the paper included, from left, Rebecca Burdine, a Princeton molecular biology professor, and graduate students Jason McSheene and Kari Baker Lenhart. The team made the discovery by studying the embryos of zebrafish.

Zohn and her research team had found a gene in mice that, when mutated, appeared to lead to disruptions in left-right patterning causing heart defects. She asked Burdine if she could locate a similar gene in zebrafish. When Burdine studied the mouse gene found by Zohn's team and its location in the spool of genetic matter known as the genome, Burdine realized that her team knew of a gene mutation in zebrafish that was in the same general area of the zebrafish genome. Upon further study, however, Burdine and her team found that the mouse and zebrafish genes were not only in the same general area of their relative genomes -- they were the same gene.

At that point, the teams tracked where the genes were expressed in mice and fish to better understand their function. The groups found that the genes were specifically turned on in cells that produce motile cilia, important hair-like fibers that project from the surface of cells.

Burdine reasoned that zebrafish embryos with the mutated version of the gene also should possess some sort of defect in the cilia themselves. However, views of the cilia in zebrafish embryos through normal lab microscopes showed nothing beyond the ordinary.

She sent the images to Omran, who was treating people with a disorder known as primary ciliary dyskinesia or PCD. These patients suffer from a defect in the action of the cilia lining the respiratory tract. Normally, cilia beat rhythmically, moving mucus toward the throat. If cilia are impaired, however, they cannot reduce or remove mucus from the lungs, leaving people with the disorder susceptible to chronic recurrent respiratory infections, including bronchitis and pneumonia. Since motile cilia also are required for proper left-right patterning, these patients also often have defects in organ positioning.

Of the 26 patients with similar cilia structural defects tested by Omran, some 17 were found to have mutated versions of the gene CCDC40. In addition to the respiratory ciliary disorder, the patients also suffered from congenital heart defects. This finding provided evidence of a link between the cilia-induced respiratory disorder and the heart problems.

By knowing the gene and the properties conferred by its mutated version, scientists may be able to better treat those with the mutant gene and its accompanying respiratory disorders. Researchers eventually may be able to devise genetic repairs to impaired cilia, Burdine said.  Because some congenital heart defects can be surgically repaired, it will be important for those individuals to understand whether or not they may be at risk for passing their defect on to their own children. In the future, it may be possible to screen for mutations in CCDC40 to help determine the risk of congenital heart defects.

In addition to Burdine, Princeton scientists on the paper included: Noriko Okabe, a former postdoctoral fellow; Kari Baker Lenhart and Jason McSheene, graduate students; and Jessica Sullivan-Brown, a former graduate student, all in the Department of Molecular Biology.

In the United States, teams included those at: the Children's National Medical Center in Washington, D.C.; the Howard Hughes Medical Institute at the University of Colorado in Denver; and the Sloan-Kettering Institute in New York. In Germany, teams included those at: the University Hospital Freiburg; the Klinik und Poliklinik für Kinder- und Jugendmedizin-Allgemeine Pädiatrie-Universitätsklinikum in Münster; Albert-Ludwigs-University in Freiburg; the Max Planck Institute for Plant Breeding Research in Köln; and the Max Planck Institute for Developmental Biology in Tübingen. Other groups were based at: the National Medical Center and the Pediatric Institute Svabhegy, both in Budapest, Hungary; and Copenhagen University Hospital in Denmark.

Support for the research included funding from the American Recovery and Reinvestment Act, the federal economic stimulus bill enacted last year, and also from the National Institute of Child Health and Human Development of the National Institutes of Health, the March of Dimes Foundation, the Spina Bifida Association, the German Human Genome Project and the Howard Hughes Medical Institute.