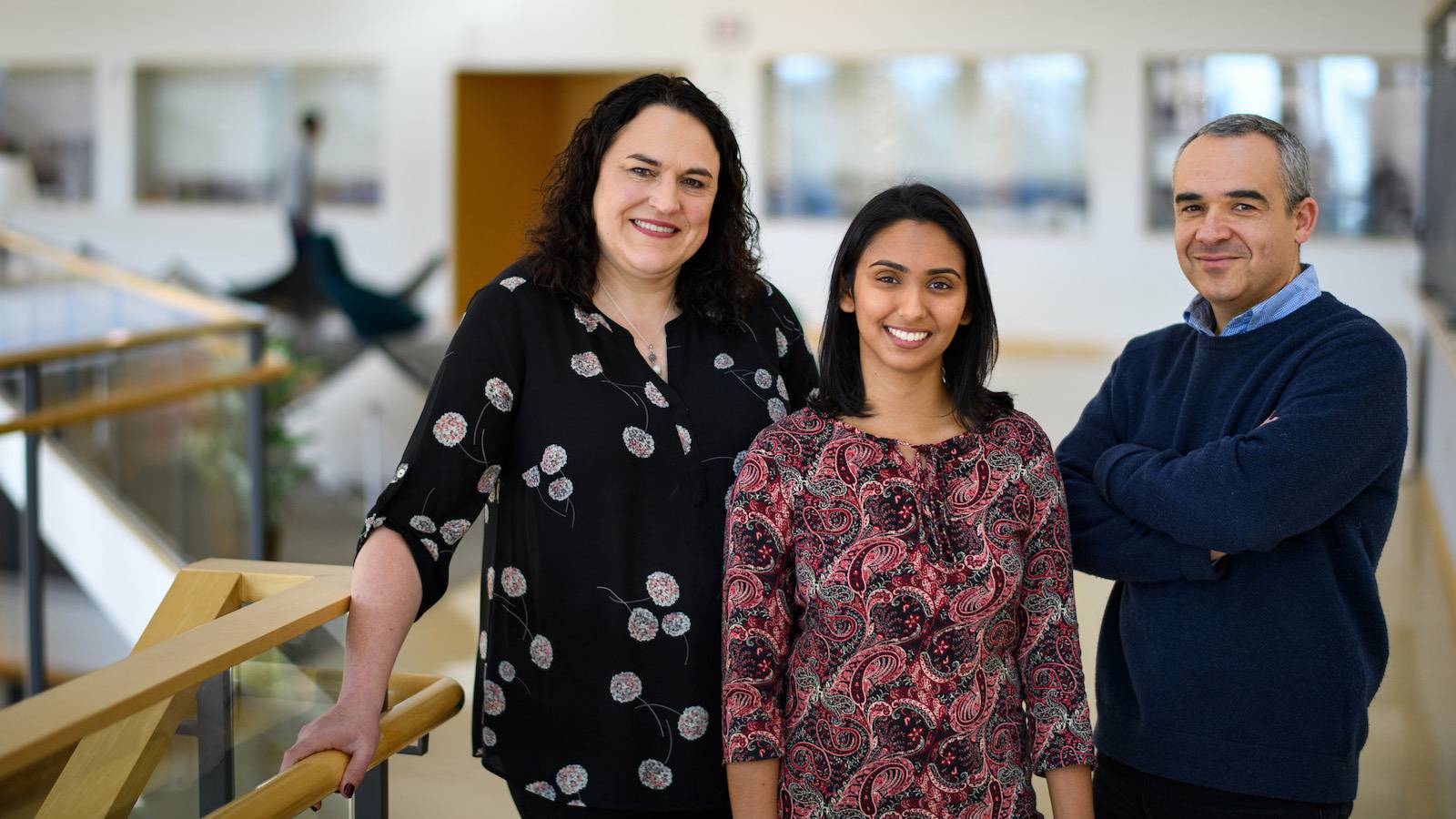 Princeton researchers have created a tool, combining light and a specific protein, that gives an unprecedented look at developing life forms. The study was led by Aleena Patel, center, a graduate student in chemical and biological engineering. Faculty members Rebecca Burdine, left, and Stanislav Shvartsman, right, were co-principal investigators on the project.

Combining light and a protein linked to cancer, researchers at Princeton University have created a biological switch to conduct an unprecedented exploration of cellular development in the embryo.

The study, published Dec. 2 in the Proceedings of the National Academy of Sciences, promises to help experts map precise cause and effect relationships in one of life's most basic systems — the development of an amorphous embryo into a fully articulated life form. How does an undefined cell know to become part of a toenail and not a brain stem? Scientists don't understand this process very well, but they know it's central in understanding disease and development.

Aleena Patel, a graduate student in chemical and biological engineering and the study's first author, said that when signals misfire and the cellular control mechanisms veer off course, a wide variety of problems can emerge, including many developmental disorders and, later, the precursors of cancer. "We want to know how these mutations are breaking not only the interaction networks within cells but also the developmental processes that are so tightly regulated in the entire embryo," she said.

The researchers said their technique can be adopted widely, probing these interactions to answer a range of questions. For example, while the current work focuses on signal timing, future work could look at spatial patterns. 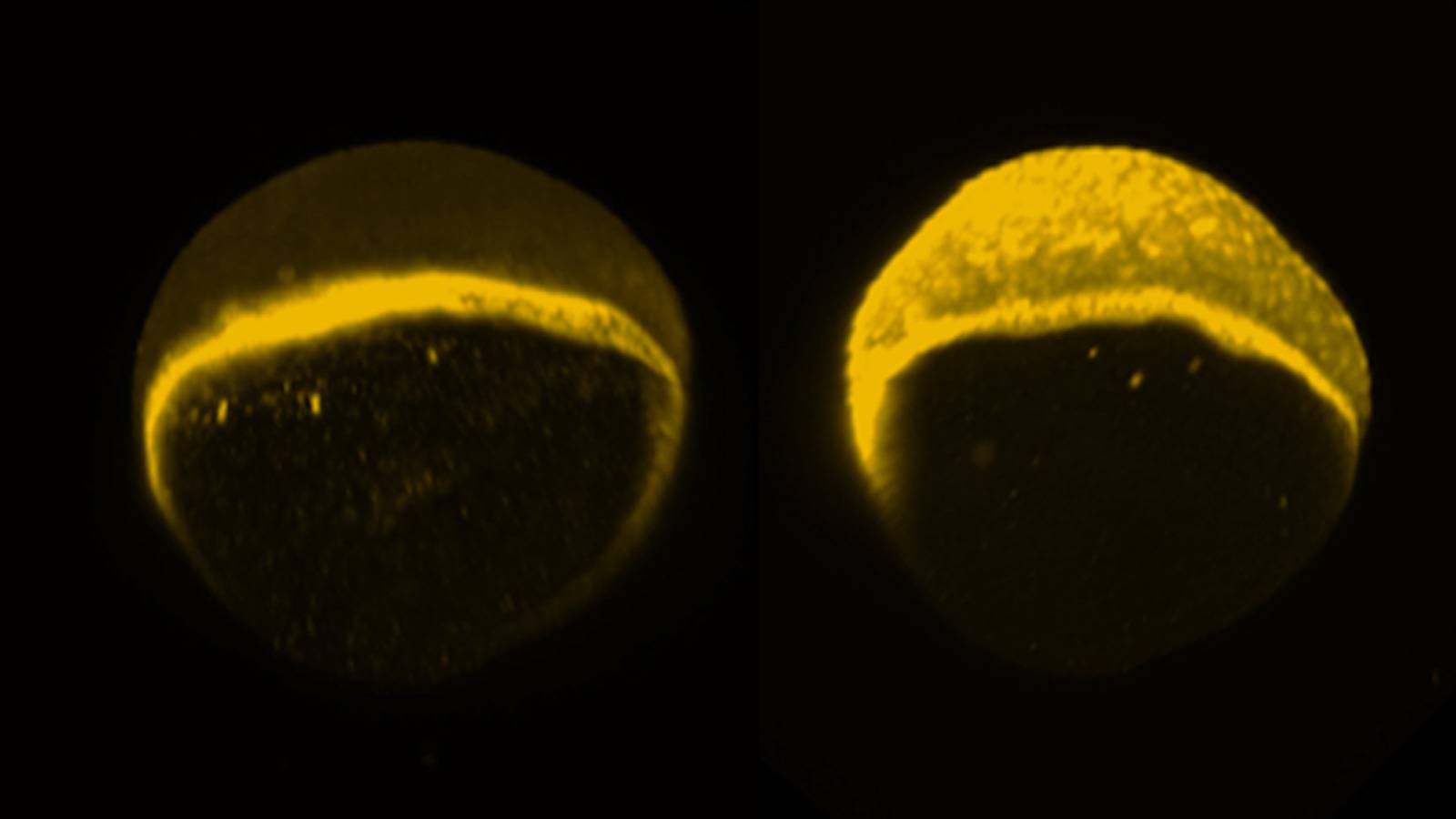 In a normal zebrafish embryo, left, chemical signals travel along tightly regulated pathways. By flooding an embryo with those signals, right, the researchers traced links between protein behavior and developmental disorders.

In a series of experiments, the researchers blasted proteins in developing zebrafish with a targeted pulse of light (a technique known as optogenetics), switching the proteins into their activated state. Each activated protein then sent chemical signals along a prescribed pathway into the cell's center. In normal development, these signals activate at just the right time and in just the right place, always in exactly the same way. But the researchers turned the switch on out of sequence, for long intervals, flooding the cell with its own signal and tracing the outcomes.

The Princeton team focused on a chain of chemical signals called the ERK pathway, one of only a few signaling pathways preserved over 3.5 billion years of natural selection. A vast number of developmental disorders arise from early problems in the human ERK pathway, including underlying causes of congenital heart disease, autoimmune syndromes, skeletal malformations and epilepsy. When ERK pathway problems occur in adult cells, they can result in malignant tumors.

Because the ERK pathway exists in nearly every multicellular organism, scientists consider it part of a universal cell-to-cell communications system. Studying this system in zebrafish reveals a lot about humans, too.

"We choose problems where progress seems possible," said Stanislav Shvartsman, professor of chemical and biological engineering and the Lewis-Sigler Institute for Integrative Genomics. "We don't need to start with a giraffe or a tiger." Shvartsman co-led the study with Rebecca Burdine, associate professor of molecular biology.

Even with precision instruments and a relatively simple organism, the researchers struggled in early attempts to engineer a usable system for studying the ERK pathway. Patel knew she could activate the right protein, but what happened next was hard to decipher. Faced with weak activation, she decided to swap the normal protein for a mutated form, known to cause cancer, and found that it allowed her to tune and amplify the signal, making it easier to map cause and effect in the noisy cell. In doing so she extended the optogenetic tool, borrowed from work in cell culture, for viable use in zebrafish — an ideal species for studying embryos.

"It reminds us that context is important, and signaling within a developing organism is regulated differently than what we might see in a dish," Burdine said. "Being able to use mutations to tune how active the kinase is, once released by light, is a new concept to my knowledge, and will be very useful when making and using these tools for future studies."

This work was supported by the National Science Foundation's Graduate Research Fellowship Program and the National Institutes for Health.