Researchers at Princeton University have revealed the inner workings of a gene repression mechanism in fruit fly embryos, adding insight to the study of human diseases.

Led by graduate student Shannon Keenan, the team used light to activate chemical signals in developing fruit flies and traced the effects on a protein called Capicua, or Cic. Located in a cell's nucleus, Cic binds to DNA and performs the specialized task of silencing genes. The study, published in Developmental Cell and made available online March 5, reveals the dynamics of gene repression by this protein. 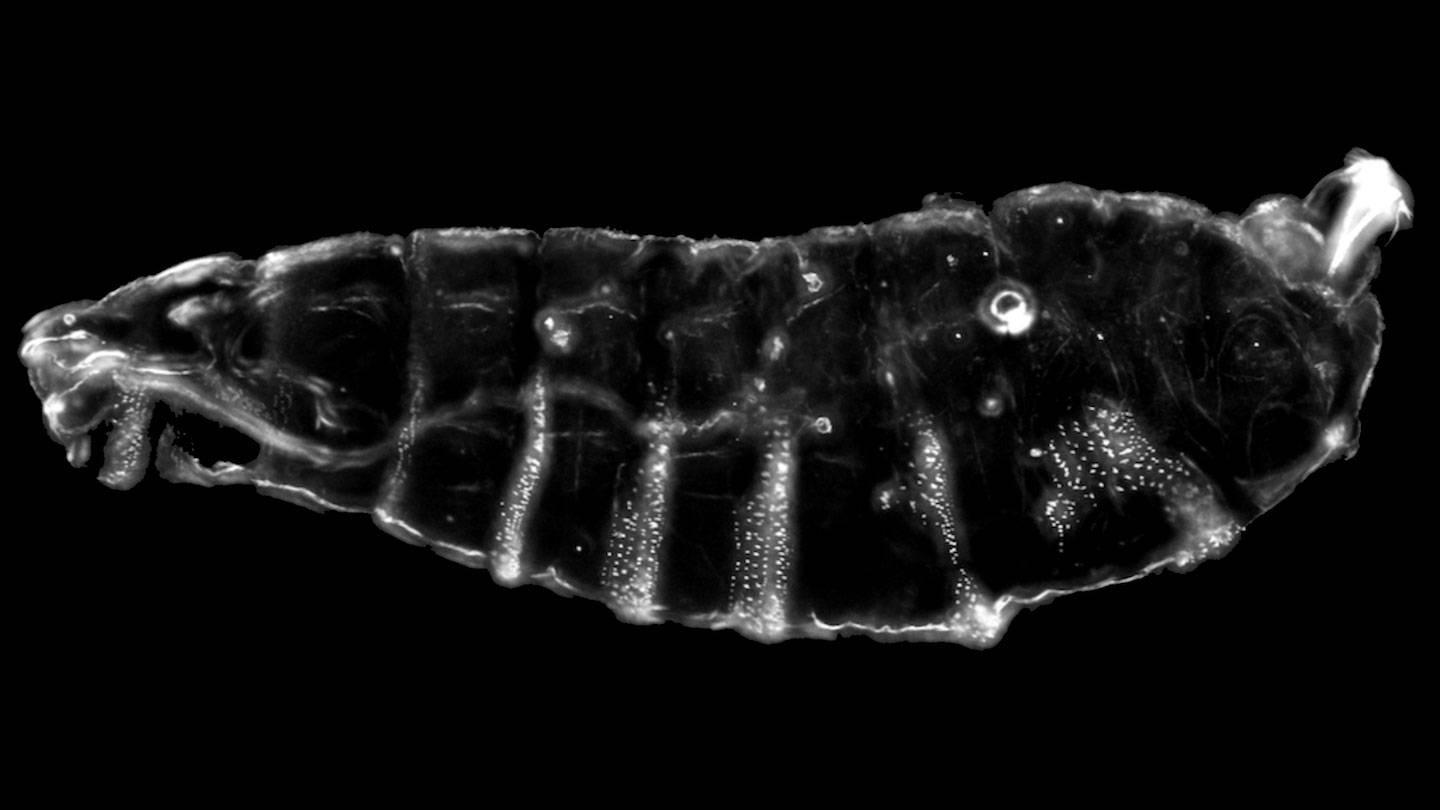 A fruit fly embryo is shown dotted with fluorescent lights, indicating DNA transcription in progress at various points along the abdomen. A recent Princeton study gave an unprecedented look at how gene repression works, revealing the dynamics of the system that prevents transcription along certain sections of genetic code.

In a complex piece of music, the silences running through the melody contribute as much to the score's effect as the sounded notes. The biological processes that control development rely on highly sophisticated temporal patterns of gene activation and repression to create life's beautiful symphonies. When a pattern is disrupted, it's like a wrong note in the music. In this case, Cic is a repressor protein that silences certain parts of the genome, allowing other genes to express in harmony with one another. Understanding how repressors like Cic work allows researchers to better conduct the orchestra.

"Signals that tell you not to do something are just as important as signals to do something," said Stanislav Shvartsman, professor of chemical and biological engineering and the Lewis-Sigler Institute for Integrative Genomics and a group leader at the Flatiron Institute at the Simons Foundation. While both Cic and its target genes were established, little was known about the dynamics of gene repression, according to Shvartsman, the study's principal investigator and Keenan's Ph.D. adviser. "Proteins that activate and repress genes can be likened to the gas pedal and brakes on a car," he said. "We know a lot about how the gas pedal works. This is the first time we are seeing the brakes in action."

The authors, including Squibb Professor in Molecular Biology Eric Wieschaus, winner of the 1996 Nobel Prize in Physiology or Medicine, focused on a critical enzyme, called ERK, that transmits signals from the cell’s surface to its nucleus. By controlling ERK with light, in precisely timed sequences, they could parse out how and when the enzyme engaged the Cic protein. They found that, after about five minutes of ERK activation, the Cic protein is inactivated, which allows its target genes (normally repressed) to turn on. Remarkably, repression was reinstated just as quickly, demonstrating a very fast response time.

In addition to offering an unprecedented look at the dynamics of gene repression, the study revealed a rich new territory for further exploration. Natural selection has acted over hundreds of millions of years to tune these processes. Their timing is no accident. According to Keenan, the mechanism's fast response time guards cells against biochemical noise that could otherwise introduce catastrophic errors. 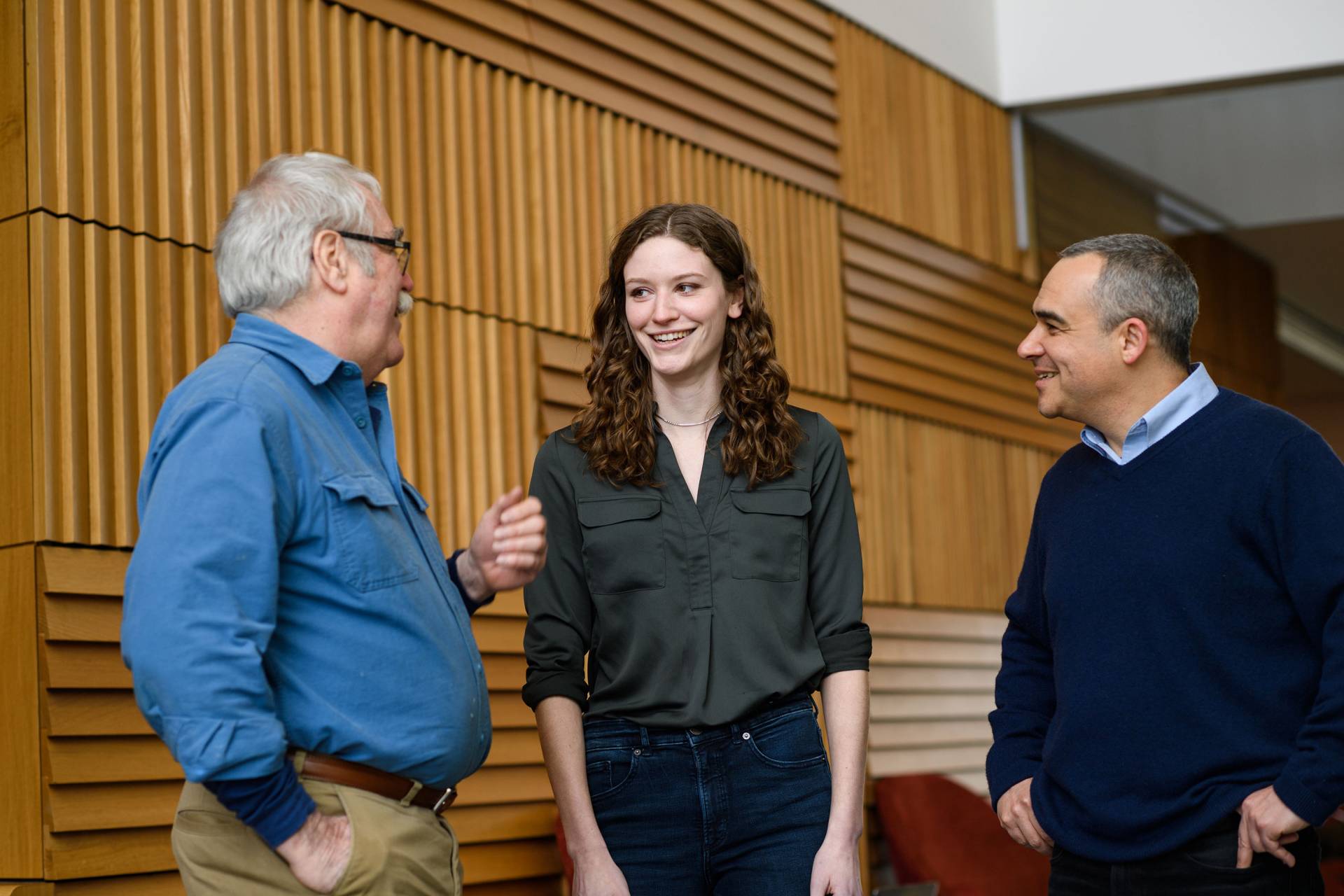 Researchers led by graduate student Shannon Keenan, and professors Stanislav Shvartsman, right, and Eric Wieschaus, left, used light to control a protein that represses genes and is tied to the onset of disease and developmental disorders.

"The fly embryo is a very powerful system," Keenan said, “and the things we learn from guide our understanding and treatment of human diseases, including cancer, where Cic is commonly mutated."

Keenan came to chemical and biological engineering from an interest in solving problems in human health. She wanted to use whatever skills she had to help people, and she was good at math and science. "I never thought I'd be working with fruit flies," she said, laughing. "When I came to Princeton, I met with Stas [Shvartsman], and he showed me all these images of where genes were turned on in fly embryos. It was just very beautiful."

Other contributors to the study included Shelby A. Blythe, from Northwestern University, and Robert A. Marmion and Nareg J.-V. Djabrayan, from Princeton. The work was supported by the National Institutes of Health.