Persisting in a search for new cancer treatment 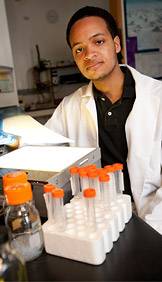 Molecular biology major Kristan Scott focused his senior thesis on a mutant gene linked not only to colorectal cancer but also to the cancer’s ability to resist chemotherapy. Working with special yeast cells created in the lab of his thesis adviser, Senior Lecturer Alison Gammie, Scott helped figure out the combination of cancer treatments that restored sensitivity to chemotherapy — a result that suggests a potential new chemotherapeutic approach for treating certain cancers.

At some point this past summer Kristan Scott wondered if his senior thesis project had a future.

Since the spring of his junior year, the Princeton University molecular biology major had studied the scientific literature related to a mutant gene linked not only to colorectal cancer but also to the cancer's ability to resist chemotherapy. He was now hoping to reproduce and observe this resistance in yeast developed in the lab of his thesis adviser Alison Gammie.

But the resistance was not happening. Not that Scott could see, anyway.

After a discussion with Gammie earlier this fall, however, he implemented a different approach. He had been tracking cell survival, but that all-or-nothing type of measurement would not detect more subtle interactions between chemotherapy and the mutant cells. Instead, Scott focused on a cell's growth rate. While not a new strategy generally, he said, it was a clever technique in this case and, most importantly, it worked.

"It was a relief when it started working," Scott said. "Before then, when I had to struggle to reproduce resistance, it was hard. Because work in biology can take years, I didn't expect to have a large amount of data for my senior thesis, but I still wanted it to be good. Science can be rough throughout but it's really satisfying when you finally get interesting data."

Once Scott figured out how to record chemotherapy resistance, he helped find the ideal combination of cancer treatments that restored the yeast's sensitivity to it. This result, which will be part of a paper currently being written in Gammie's lab, suggests a potential new chemotherapeutic approach for treating certain cancers. 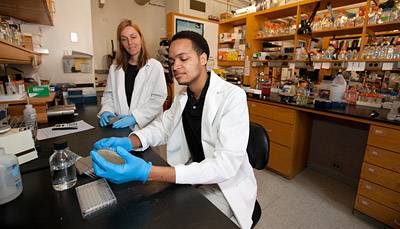 Scott prepares a sample of yeast cells with Gammie (left) in her lab. With Gammie's help, Scott finally found a way to observe the resistance to chemotherapy in yeast cells that his project hinged on.

Like any breakthrough, Scott's was the product of perseverance, a trait that he has shown consistently even in a situation when a young researcher could easily be discouraged, said Gammie, a senior lecturer in Princeton's Department of Molecular Biology who oversees a lab with Princeton Professor of Molecular Biology Mark Rose.

"Kristan's project was a little risky in the sense that we weren't sure he was going to be able to find the right conditions to see the drug resistance," Gammie said. "But he works really hard. He doesn't postpone or procrastinate. We talk about something and he does it. That's often the factor that determines how successful students are with their thesis. That was definitely the factor for his."

Also exciting for Scott, a Miami native with an interest in medical school, is the clinical relevance of his work. The Gammie lab focuses on the role of mismatch-repair protein mutations in the growth of cancer. These proteins act as a kind of biological spell-check, Gammie said, that ensures the DNA of genes is free of errors. While the work in Gammie's lab is conducted on yeast, her group works with University of Connecticut Professor of Medicine Christopher Heinen to translate the results to human cancer cells.

Scott focused his work on MSH2, a gene associated with hereditary non-polyposis colorectal cancer, which accounts for roughly 5 percent of all colorectal cancer cases. Mismatch-repair genes can experience mutations that make the MSH2 gene itself a mutant and can lead to colorectal and other cancers with a strong resistance to chemotherapy, Scott said.

For his senior thesis, Scott examined how the mutations in MSH2 bestow that strong defense against chemotherapy. In addition, he wanted to better understand how the mutant cells respond to the cell damage wrought by chemotherapy and whether the deficient mismatch-repair proteins mean that cancerous cells are not receiving the message to die.

The reproduction of resistance was key to tracing where it came from, Scott said. He worked with the chemotherapy drug cisplatin — frequently used to treat colorectal cancer — and a yeast strain developed by Tim Arlow, a doctoral student in Gammie's lab. The yeast strain was sensitive to a spectrum of drugs, yet had the defective MSH2 gene. Thus, the researchers knew the yeast should be responding to the treatment and could then better understand why cells with mutant MSH2 genes were resistant to cisplatin.

After he observed this resistance, Scott helped figure out that a combination of cisplatin and a cancer treatment called bortezomib restored the sensitivity of some defective yeast strains to chemotherapy, an important result that expanded on Arlow's work, Gammie said. This finding will be included in the upcoming paper of which Scott will be a co-author.

Scott's determination, though, was among the most impressive qualities of his work, Gammie said. Once he identified the best combination of cancer treatments, he reproduced the results.

"It was a combination of perseverance and technology that allowed him to reproduce the resistance," Gammie said. "And he's repeated it enough times that we believe it. Kristan showed scientific maturity in his willingness to repeat his results. He understands that if you don't reproduce your results, you can't publish them."

Scott credits Gammie's mentorship as essential to his overcoming the challenges of his thesis research, as he was able to discuss ideas, obstacles and new approaches when he needed to.

"The amount of time I have put into this project is more than I've ever done before," Scott said. "Still, there was never a point when I wanted to give up because with Alison there was always something new to try, a different way from what I had been doing."