In a twist on "survival of the fittest," researchers have discovered that evolution is driven not by a single beneficial mutation but rather by a group of mutations, including ones called "genetic hitchhikers" that are simply along for the ride. These hitchhikers are mutations that do not appear to have a role in contributing to an organism's fitness and therefore its evolution, yet may play an important role down the road.

Researchers from Princeton University found in a study of 1,000 generations of adaptation in 40 yeast populations that about five to seven specific mutations, rather than just a one, are needed for an organism to succeed. The knowledge of how mutations drive evolution can inform our understanding of how tumors resist chemotherapeutics and how bacteria evolve resistance to antibiotics. The study was published July 21 in the journal Nature.

Evolution occurs when an individual experiences spontaneous beneficial mutations in its genome that improve its ability to adapt to its environment. The common view was that a single mutation could boost the survival of an individual, which would then reproduce and pass on the mutation to its offspring.

Instead, the Princeton researchers found that rather than just one mutation causing enhanced survival, about five to seven mutations are required. These extra mutations are termed hitchhikers because they don't appear to contribute to the enhanced fitness of the organism. 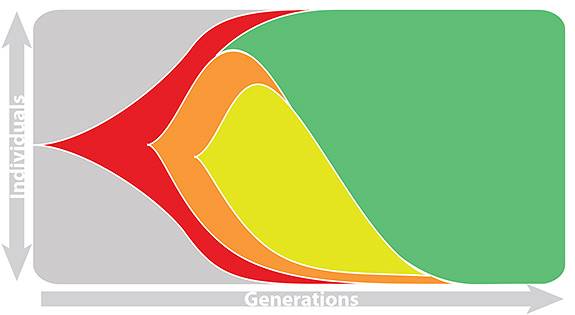 The diagram shows an evolving population of yeast, starting from a single yeast cell at the far left of the diagram in which a genetic mutation occurs (red). As the yeast cell reproduces, the mutation is passed to its descendants over several generations, as shown by the widening red area indicating the increase in the number of individuals with the red mutation. At some point another mutation (orange) occurs in one of the yeast carrying the red mutation. When the yeast cell reproduces, it passes both the red and orange mutations to its offspring. After a few more generations, another mutation occurs (yellow) in one of the red/orange-mutation yeast cells, bringing the total number of mutations that it carries to three (red, orange and yellow). The study shows that multiple (in this case, three) mutations helped the yeast adapt to its environment. In this particular population, another mutation (green) occurred (in yeast that carried the red mutation) that was far more beneficial for the yeast and the individuals with the orange and yellow mutations were forced to extinction while the cells descended from the yeast with the green mutation took over the population. This is one of 40 fully sequenced populations published in this paper that together provide detailed picture of how organisms adapt to their environments. (Image courtesy of Gregory Lang)

"Our study indicates that evolution is more of a group effort," said Gregory Lang, first author on the paper and an associate research scholar in the laboratory of David Botstein, the Anthony B. Evnin '62 Professor of Genomics at Princeton University's Lewis-Sigler Institute for Integrative Genomics. The research team included co-first author Daniel Rice at Harvard University, who made key contributions to the bioinformatics and data analysis; Michael Desai, an assistant professor at Harvard University and a former Lewis-Sigler Fellow at Princeton; Mark Hickman at Rowan University; and Erica Sodergren and George Weinstock at the Washington University School of Medicine.

"The finding goes against the traditional view of evolution being determined by individual mutations that provide a large fitness advantage by themselves," Desai said. "We found that small groups — which we call cohorts — of mutations were associated with increased survival. No single mutation is driving adaptation. The whole group, which includes hitchhikers, drives adaptation together."

The study helps expand our understanding of how evolution arises from a combination of genetic mutations, which are thought of as occurring spontaneously, and environmental pressures, said Botstein. "We've shown that this first component, the genetics, involves not just one gene mutation but several that need to co-exist before evolution can happen."

The relatively small subset of gene mutations that were found to enhance survival, Botstein said, suggests that there are only a limited number of ways in which organisms can substantially increase their fitness. "Understanding the basic process in yeast translates to other organisms," he said.

The study explored how the process of mutation and selection unfolded over time at the genetic level. To look at mutations and survival, the researchers observed 40 different yeast strains that reproduced asexually for 1,000 generations. Over time the researchers noted the appearance of specific mutations that conferred a survival advantage, allowing certain yeast colonies to thrive. As time progressed, additional mutations cropped up, until researchers found that all of the best survivors contained the same group of five to seven mutations.

Although the researchers refer to the groups of mutations as containing drivers and hitchhikers, Desai said that additional research is being done to explore which mutations are necessary for adaptation and which ones are along for the ride. He noted that the mutations are not located near each other, nor do they appear to have similar functions.

Previous evidence suggests that yeast may experience beneficial mutations that inactivate genes they no longer need. For example, Lang and Botstein in collaboration with Andrew Murray at Harvard University reported in the journal Proceedings of the National Academy of Sciences in 2009 that, if grown in conditions where the yeast can only reproduce asexually, mutations that inactivate genes for proteins involved in sexual reproduction boost survival because the organisms do not waste metabolic energy producing unneeded proteins. The team plans to explore whether the mutations identified in the new study confer specific survival advantages.

"By following genomic changes across cell populations over time, this study allows a rare glimpse of evolution in progress," said Stefan Maas of the National Institute of Health's National Institute of General Medical Sciences, which partially funded the research. "This systems biology approach yields insights that could help us understand how mutations spread through other evolving systems, such as cancer cells or disease-causing microbes."