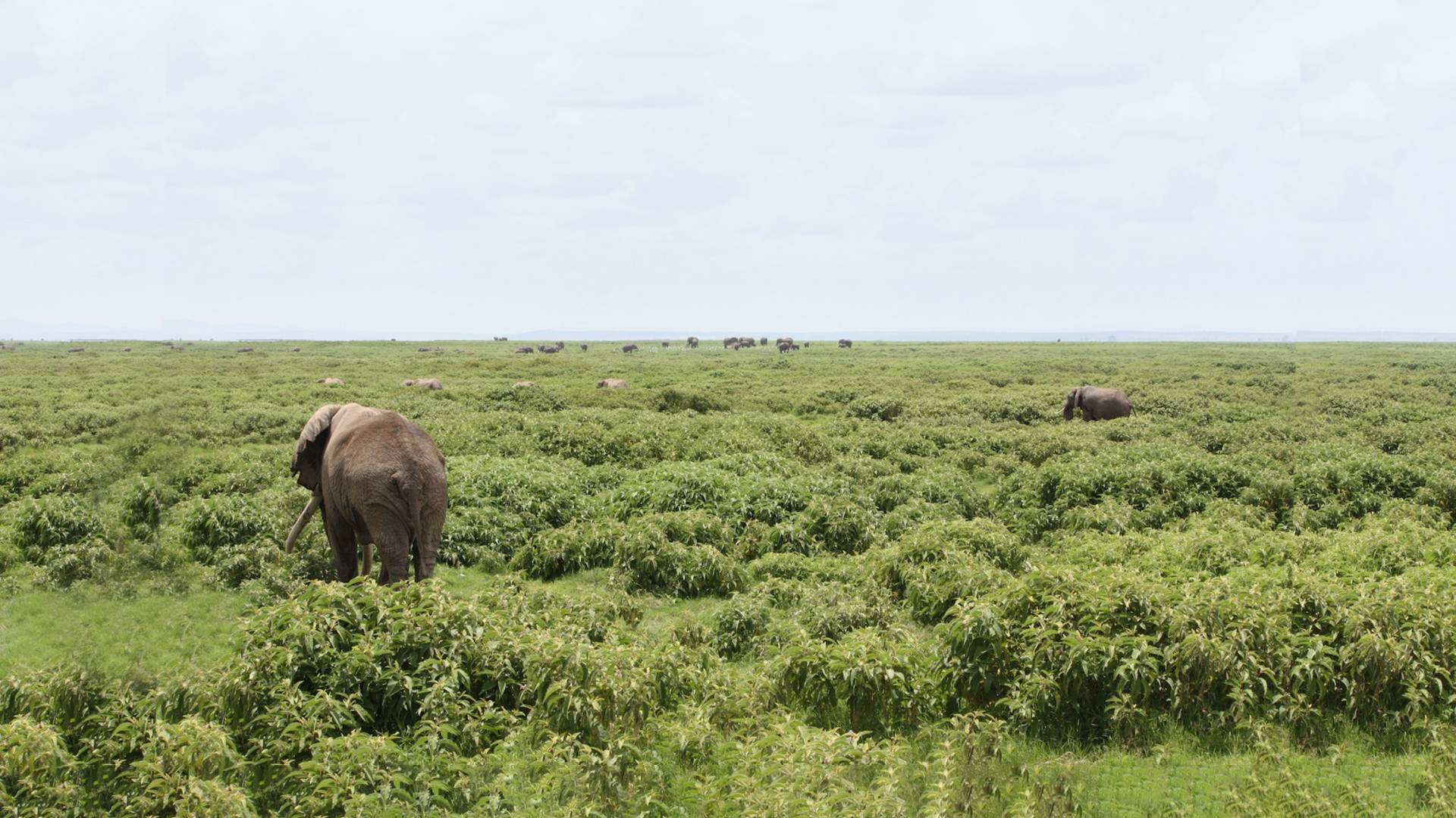 In regions of Africa wracked by heavy poaching, people have observed an increased incidence of African elephants without their iconic white tusks, which are prized in the multibillion-dollar wildlife black market. But there has been no direct genetic evidence indicating how this was happening, or why this trait was occurring exclusively in female elephants. 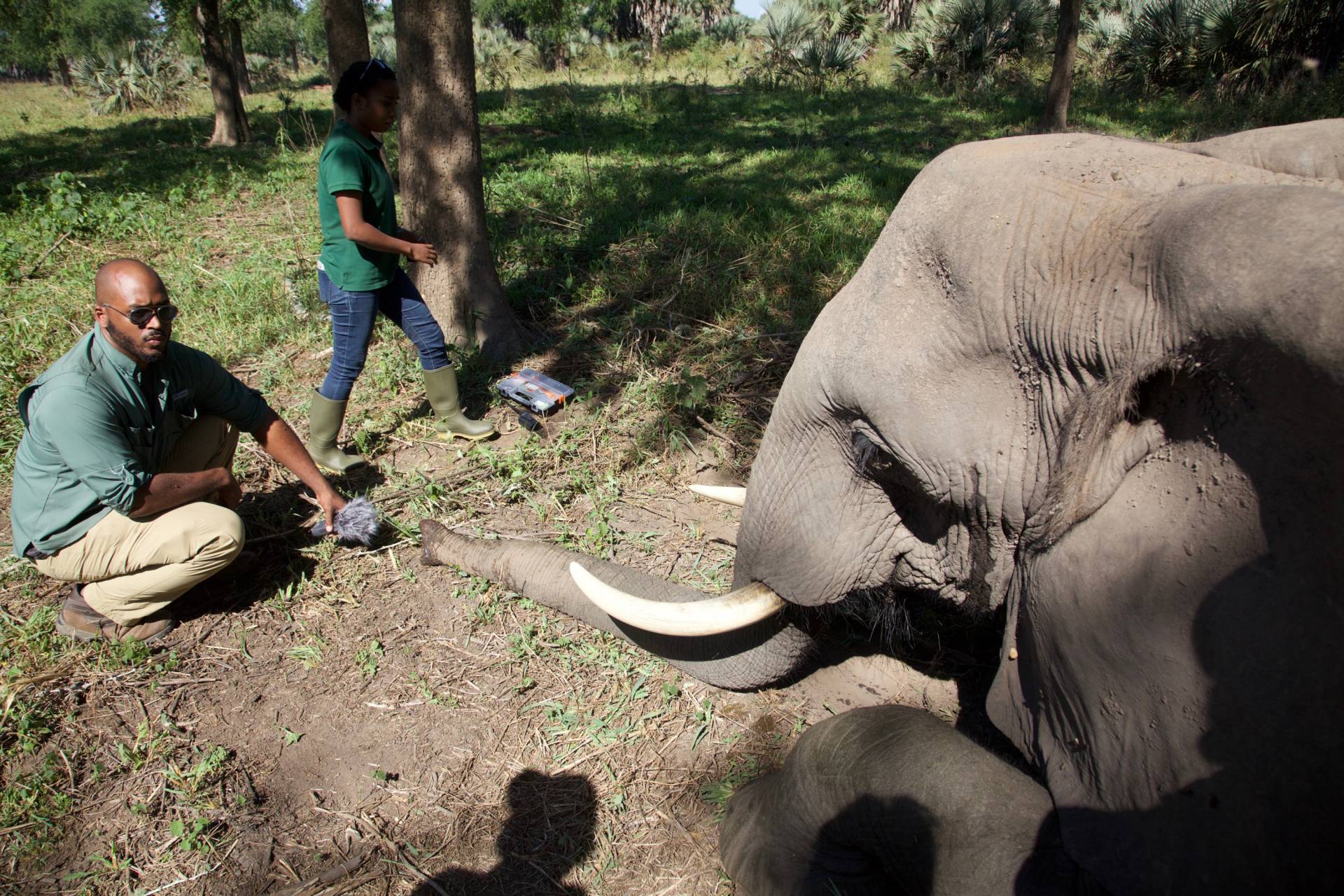 Shane Campbell-Staton, assistant professor of ecology and evolutionary biology. with an elephant at Gorongosa National Park in Mozambique. The elephant has been anesthetized for the collection of tissue samples for genomic and dietary analyses, and to be fitted with a GPS collar.

A team led by Princeton University researchers has now implicated two genes associated with tooth development in mammals to be at the center of the tuskless elephant phenomenon, according to a study published Oct. 21 in the journal Science. One of these genes is connected to the X chromosome and is lethal to males, while humans who have the same gene mutation exhibit similar teeth defects.

“Elephants are such an iconic species that is so important for the savanna ecosystem and now we have a better understanding of how human activity is impacting them,” said co-first author Shane Campbell-Staton, assistant professor of ecology and evolutionary biology at Princeton and associated faculty in Princeton’s High Meadows Environmental Institute (HMEI).

Campbell-Staton worked with co-first author Brian Arnold, Schmidt DataX biomedical data scientist at Princeton based in the computer science department and supported by the Center for Statistics and Machine Learning. Co-authors of the paper also include Robert Pringle, professor of ecology and evolutionary biology at Princeton and associated faculty in HMEI; Dominique Gonçalves, Elephant Ecology Project Manager at Gorongosa National Park; Petter Granli and Joyce Poole, co-founders and co-directors of ElephantVoices; and Ryan Long, associate professor of wildlife sciences at the University of Idaho.

A response to a population bottleneck

Campbell-Staton, who conceived of the project while at UCLA, had a hunch that the tuskless phenotype was passed down in the X chromosome, but collecting survey data and blood samples would be key to unraveling this mystery.

To collect these samples, Campbell-Staton and other research team members focused on African bush elephants (Loxodonta africana) at Gorongosa National Park in Mozambique. African bush elephants are considered to be Earth’s largest terrestrial land animal, with a height reaching 13 feet at the shoulder, distinguishing it from its smaller cousins, the African forest and Asian elephants. Bush elephants’ tusks can measure up to 6 feet long and weigh 50 pounds each, with the tusks of some male elephants (called bulls) so large that they drag on the ground.

From 1977 to 1992, the Mozambican Civil War ravaged the park, with opposing combatants poaching elephants for ivory and meat. The conflict saw a rapid decline in the elephant population, from over 2,500 to around 200 after the war. Along with this steep decline, there was an increase in tuskless female elephants, from 18.5% to 50.9%. Male tuskless elephants have not been seen in the park, but there have been rare anecdotal sightings of them elsewhere.

Arnold said they used simulated numerical models and statistical analysis to determine that a tuskless female elephant was five times more likely to survive during the war than a female with tusks, an example of a very strong natural selection caused by poachers.

In another part of the study, researchers focused on analyzing the differences between whole genomes of tusked and tuskless elephants with tusked elephants exhibiting fewer rare genetic variants, “which is consistent with a more severe population contraction of tusked individuals,” according to the paper. Crucially, the researchers also found that the condition of tusklessness among female offspring of the war survivors remained elevated at 33% of the population versus 50.9% immediately after the war.

Due to the increase of tusklessness exclusively among females, the researchers surmised that this favorable trait must be associated with the X chromosome. And because there were no records of male tuskless elephants, this inherited trait may be lethal to males. Under this hypothesis, if a female tuskless elephant were to become pregnant with a male, she would spontaneously abort the fetus half of the time, Arnold said.

The researchers tested this hypothesis by undertaking a phenotype/population survey of female elephants and their offspring. Population patterns uncovered that tuskless mothers tended to have offspring that were 65.7% female, which again strongly suggested an X-linked trait with recessive lethality. This would also make these tuskless females less fertile overall, Arnold said.

To trace which genes were responsible for these unique traits, a deep dive into the whole genome was in order. The researchers sequenced genomes from the tusked and tuskless populations from the park and then used bioinformatics software programs to assemble all the data and perform custom analysis. They scanned the genomic data, trying to find genetic regions with strong links to selection by recent poaching and X-linked traits with recessive lethality, among other analyses. They then compared the genomes between tusked and tuskless elephants to find “patterns of genetic divergence.”

“Under the hypothesized model of inheritance, we expected the genomes of tusked individuals to lack the specific mutation(s) causing tusklessness,” the researchers reported.

By winnowing down possible regions of the elephant genome that may contain the genes for tusklessness, the team narrowed their focus to the gene MEP1a, which codes for some aspects of teeth formation, and the X-linked gene amelogenin (AMELX), which is responsible for the biomineralization of tooth enamel and the formation of gums and cementum, a type of hard tissue that supports and anchors teeth.

In humans, deletions of AMELX and some nearby genes manifest in a condition called amelogenesis imperfecta, which results in missing or flawed enamel and cracked teeth. In addition, this disorder co-occurs with a syndrome in humans that is X-linked dominant and male lethal. What’s also interesting is that the affected women’s maxillary lateral incisors — a pair of teeth located in the upper row — are either smaller than normal or missing altogether. These incisors correspond to where tusks are located in an elephant’s mouth.

Existing research has pinpointed another gene, holocytochrome c-type synthetase (HCCS), that is connected to recessive lethality and is located next to AMELX. Scientists found out that genetically engineered mice with deletions in this approximate region can have viable male offspring if they force the expression of the HCCS gene.

“It’s fascinating insight into the mystery of how the elephants lost their tusks — a phenomenon that biologists have long been aware of, but that nobody has ever explained,” Pringle said. “It’s a great example of how cross-disciplinary collaborations at the nexus of ecology, evolution and data science can enable us to unlock the answers to important environmental questions.”

Besides the genes, there should be interesting implications to the rise of tuskless female elephants in terms of behavior and consequences to the larger environment, Long said. Pringle’s research has shown that tuskless elephants eat different plants than tusked ones, based on sequencing DNA from fecal samples through a process called DNA metabarcoding.

“Some of our preliminary data suggest that tuskless elephants consume different diets than their tusked counterparts,” Long said. “Because elephants are a keystone species, changes in what they eat can affect the entire landscape, so a high rate of tusklessness in an elephant population could very well have ecosystem-wide consequences.”

While this tuskless condition appears to be proof of humans driving rapid selection in a large herbivore, the research team cautions that further study needs to be undertaken on whether these genetic traits can be found in other populations in Africa.

Meanwhile, since the end of the war in Mozambique, the elephant population in Gorongosa has been steadily increasing, and the park has become a model for wildlife restoration and a vital, important place for research, scientific collaboration and adventure. Pringle and Campbell-Staton are collaborating on a large-scale restoration project at Gorongosa that is funded through HMEI’s Biodiversity Challenge program.

“Pursuing this study was probably the greatest adventure of my life so far,” Campbell-Staton said. “I feel incredibly lucky to have been able to team up with such brilliant people from such a wide range of disciplines to study a phenomenon that has been a somewhat of a mystery for quite some time.”