It was two days on a crowded bus trundling across the sultry savannas and hills of Mozambique, with nothing but a guidebook to keep her company among her Portuguese-speaking co-passengers, that set the course for Jen Guyton's life as a researcher.

During that journey in 2011, her guidebook introduced her to Gorongosa National Park in central Mozambique, one of the world's most biologically rich habitats. Since 2013, Guyton has been one of several graduate students and postdoctoral researchers in the group of Princeton University's Robert Pringle, an assistant professor of ecology and evolutionary biology, who make Gorongosa the focus of their research. 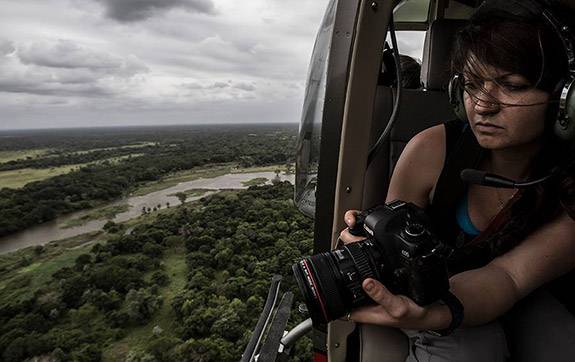 A new video series features the work of Princeton University graduate students and a postdoctoral researcher working in Mozambique's Gorongosa National Park, one of the world's most biologically rich habitats. The field experience is invaluable to researchers such as Jen Guyton (above), a graduate student in ecology and evolutionary biology who is pictured flying over the Lake Urema floodplain, the heart of the Gorongosa ecosystem. (Photo by Piotr Naskrecki)

Now, the work of Guyton, two other Princeton graduate students and a postdoctoral researcher is featured in a video series released by the North Carolina-based E.O. Wilson Biodiversity Foundation. The series is intended to highlight research being conducted at the E.O. Wilson Biodiversity Laboratory, a modern laboratory and field station the national park established in March 2014 so that researchers and students from Mozambique and other nations can study and work to preserve biodiversity.

The videos, which include written accounts of the featured person's work and experiences, show that Gorongosa provides researchers with invaluable and unforgettable field experience, as well as an opportunity to revive a vast wilderness in critical need of help. For the past several years, the park has been the focus of a multi-million dollar effort to research and restore its ecosystems, which are recovering from the destruction caused by Mozambique's civil war. Lasting from 1977 to 1992, the war caused severe disruptions to the Gorongosa ecosystem — such as the loss of an estimated 95 percent of the park's large animals, largely from poaching — of which the consequences are still not fully understood.

"I love fieldwork," said Guyton, who will work from Gorongosa during the next three years at least, until she completes her Ph.D. "There's nothing like waking up to the wails of a bushbaby in the middle of the night, and no more life-affirming an experience than trying to outrun an elephant in your field vehicle.

"Parks like Gorongosa offer scientists a way to observe nature in an unpaved state," Guyton continued. "Parks preserve the ecological interactions that make life on Earth tick. Gorongosa in particular offers an interesting opportunity to see what happens when humans manipulate those ecological interactions, and we're now trying to figure out how nature compensates for that kind of thing." 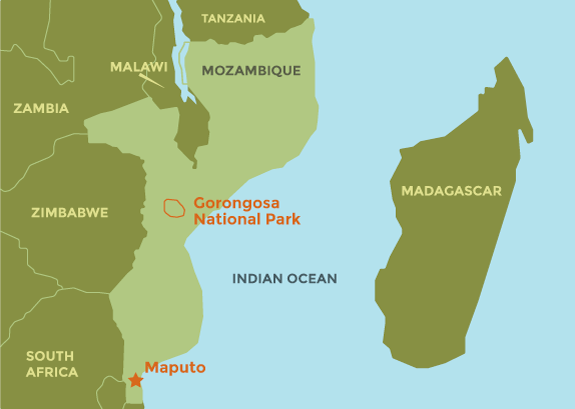 Located in central Mozambique, Gorongosa has been the focus of a multi-million dollar effort to research and restore its ecosystems, which are recovering from the destruction caused by Mozambique's civil war. Lasting from 1977 to 1992, the war caused severe disruptions to the Gorongosa ecosystem, such as the loss of an estimated 95 percent of the park's large animals, largely from poaching. (Map by Kyle McKernan, Office of Communications)

Researchers and graduate students at Gorongosa can have the unique experience of seeing their work quickly implemented as a measure to protect and revitalize the park, said Pringle, who is on the board of the Gorongosa Restoration Project, a nonprofit organization funded by the U.S.-based Gregory C. Carr Foundation. Pringle, who met foundation-founder Gregory Carr in 2010, got his research group involved in Gorongosa after joining Princeton's faculty in 2012.

"It is exceedingly rare to have such a tight coupling of science and management, especially in sub-Saharan Africa. For graduate students and postdocs to have the chance to see their research influence policy — that's something special," Pringle said.

"It's an opportunity to solve mysteries that have never been solved, and then to have those solutions get incorporated directly and immediately into the management strategy of the national park," he said. "When we find out something exciting that might help park managers in their attempt to bring the park back to its former glory, they want to know about it."

The Pringle group is focused on the lush floodplain of Gorongosa's Lake Urema, the "beating heart" of the park's ecosystem, Pringle said. The composition of vegetation in the floodplain appears to have changed so that populations of large mammals such as buffalo and wildebeest remain small, while animals such as waterbuck — a type of large antelope — are flourishing. Pringle and his students will explore how the loss of large mammals, combined with flooding, has altered the habitat, so that it can possibly be restored to a state that also benefits other, larger herbivores that have been slower to recover. 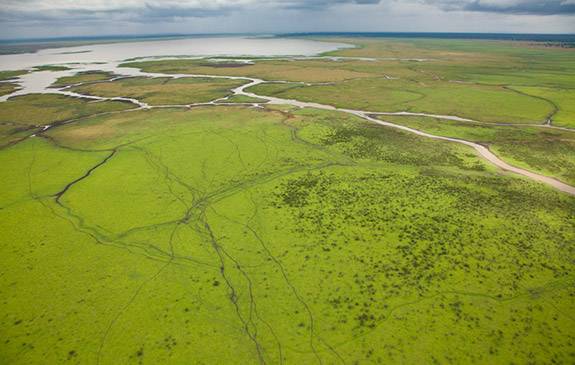 The Lake Urema floodplain (above) is a major focus for the research group of Robert Pringle, a Princeton assistant professor of ecology and evolutionary biology, which will explore how the loss of large mammals, combined with flooding, has altered the habitat. (Photo by Jen Guyton, Department of Ecology and Evolutionary Biology)

"If we're correct about that, it's definitely something that the park management — our friends — are going to want to know about, and it will likely have an impact on how they choose to manage the landscape," Pringle said.

Gorongosa combines many characteristics of an intact wilderness with an ecosystem recovering from a severe trauma. The park's tragic history lets scientists observe on a large scale how fragile habitats recover from human activity, and what can be done to aid that recovery, said graduate student Joshua Daskin, who has worked in Gorongosa since 2012.

"Gorongosa's history of dramatic mammal declines and now steady recovery provides a perfect natural experiment to study how the near-complete removal of large mammals from an entire ecosystem the size of Rhode Island affects the savanna," Daskin said. 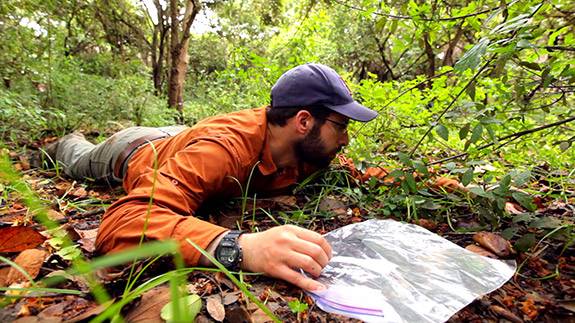 Joshua Daskin (above), a graduate student in ecology and evolutionary biology, studies the effect of war-driven large-mammal declines on the African savanna and has worked in Gorongosa since 2012. (Photo courtesy of the Gorongosa Restoration Project)

The lessons learned at Gorongosa extend beyond the park's borders to ecosystems and species elsewhere that people wish to bring back from the brink, he said. "Large reserves provide the chance to study relatively intact habitats and species interactions," Daskin said. "This enables us to understand what's different in disturbed, human-modified landscapes when society is looking to make scientifically informed conservation decisions."

Daskin studies the effect of war-driven large-mammal declines on the African savanna. He came to Gorongosa when researchers still had to camp outside for months. His experience includes a fraught night in 2012 when he camped under the watch of armed guards after a holdover rebel group threatened people working in the park. He was flown to the capital of Maputo the next morning; the threats never came to pass.

Daskin's work in Gorongosa is the focus of two of the videos. The first, "The Surprising Link Between The CIA and Conservation," explores Daskin's current work that uses CIA surveillance photos from the Mozambique civil war to determine how Gorongosa's landscape has changed as a result of a precipitous drop in the elephant population.

The second, "Murky Depths and Mysterious Ecosystems," examines the overlooked but crucial role of seasonal ponds, known as "pans," in maintaining the park's wildlife, which is research Daskin pursued during his first year at Gorongosa. The video follows Daskin as he wades into the pans and tries to determine which animals rely on these diminutive pools. 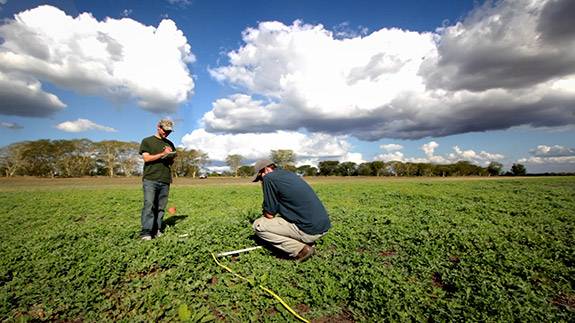 Graduate student Tyler Coverdale (left) and postdoctoral research associate Tyler Kartzinel (right) work to recreate 40-year-old vegetation surveys for the Lake Urema floodplain that will help establish a baseline for monitoring how the ecosystem has changed. (Photo courtesy of the Gorongosa Restoration Project)

The videos feature conservation in an active and engaging way, Guyton said. As part of the Pringle group's project at the Lake Urema floodplain, Guyton explored the possible key role that the lake's hippos had in the change in floodplain vegetation, which is the basis of the video "The Hippos of Lake Urema." (She has since shifted her focus to the impact of waterbuck, the population of which has exploded from a pre-war population of 3,500 to 34,000 in 2014 — though the story of the hippos is likely not over, Guyton said.)

A second video follows Guyton on one of the annual biodiversity surveys of Gorongosa she undertakes with animal and plant specialists from around the world. As portrayed in "Capturing Photographs of Bats in Flight," Guyton, who studies mammals and has a special interest in bats, scours the crevices and caves of Gorongosa with entomologist Piotr Naskrecki of Harvard University's Museum of Comparatively Zoology, documenting the animals' population in photographs.

Graduate student Tyler Coverdale and postdoctoral research associate Tyler Kartzinel also are featured in the video series. In "Return of the African Elephant," Coverdale investigates how the number of elephants in Gorongosa could be affecting the biodiversity of its plant life, which is similar to research he's pursuing at the Mpala Research Centre in Kenya, a multi-institutional research preserve with which Princeton has been long involved.

Coverdale also teams with Kartzinel in the video "Going Back in Time Four Decades" to recreate 40-year-old vegetation surveys for the Lake Urema floodplain that will help establish a baseline for monitoring how the ecosystem has changed.