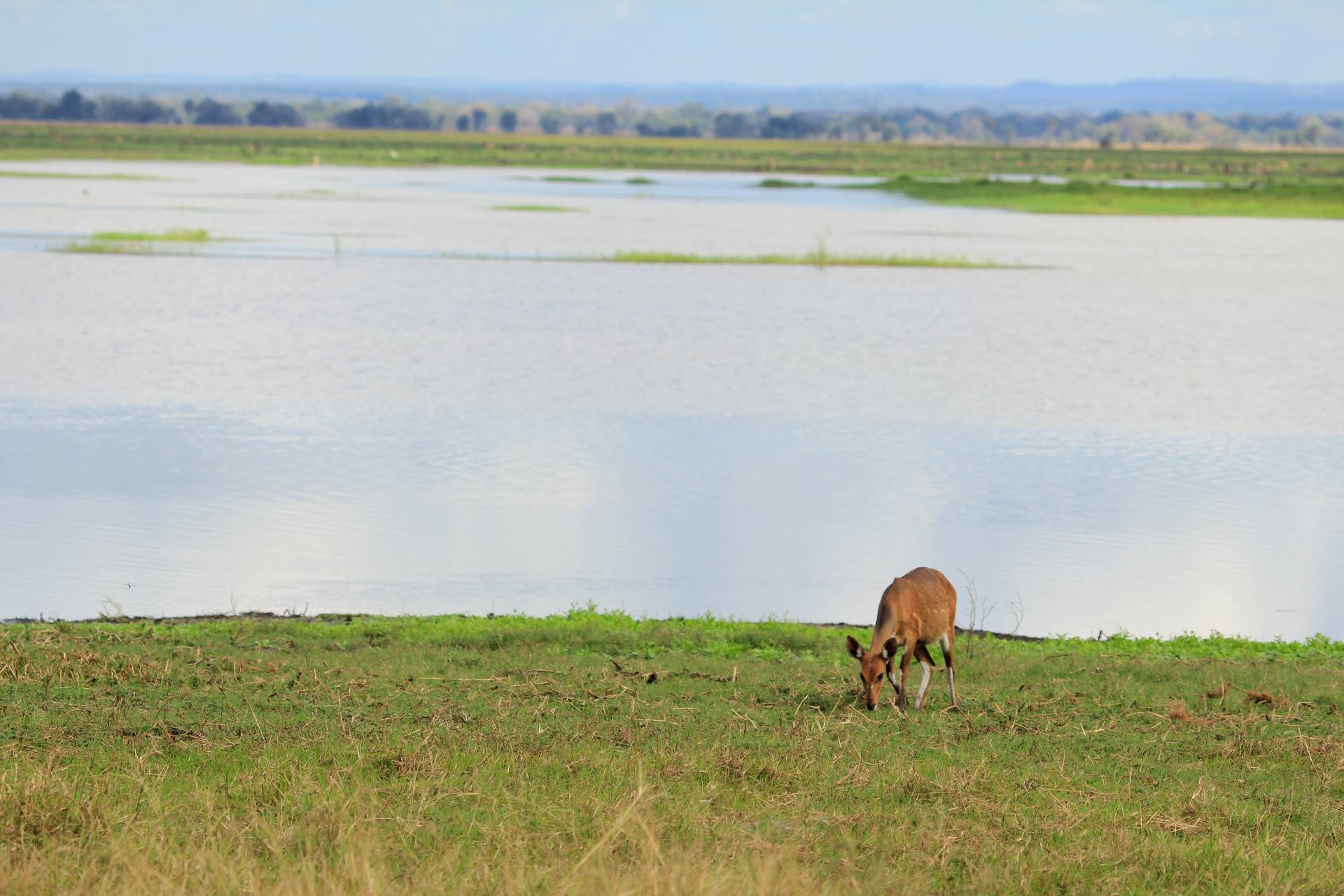 A solitary bushbuck grazes on the floodplain near Lake Urema in Gorongosa National Park. Prior to the Mozambican civil war, which lasted from 1977 to 1992, bushbuck avoided this treeless area, despite the nutrient-rich plants available.

A team of Princeton ecologists took advantage of a rare opportunity to study what happens to an ecosystem when large carnivores are wiped out.

“Large carnivores play a critical, and disproportionate, role in their ecosystems, and their populations are declining worldwide,” said Justine Atkins, a graduate student in ecology and evolutionary biology at Princeton. “However, there is real reason to be hopeful in many of these systems,” she said. She and a team of colleagues found evidence that reintroducing key carnivores in a large-mammal ecosystem could undo the damage caused by their removal. Their work appears in the March 8 issue of the journal Science.

The researchers were working in Gorongosa National Park, where the Mozambican civil war took a tremendous toll on wildlife populations. Most herbivore species have been recovering, but several major large carnivores — leopards, hyenas and African wild dogs — were eliminated from the park. 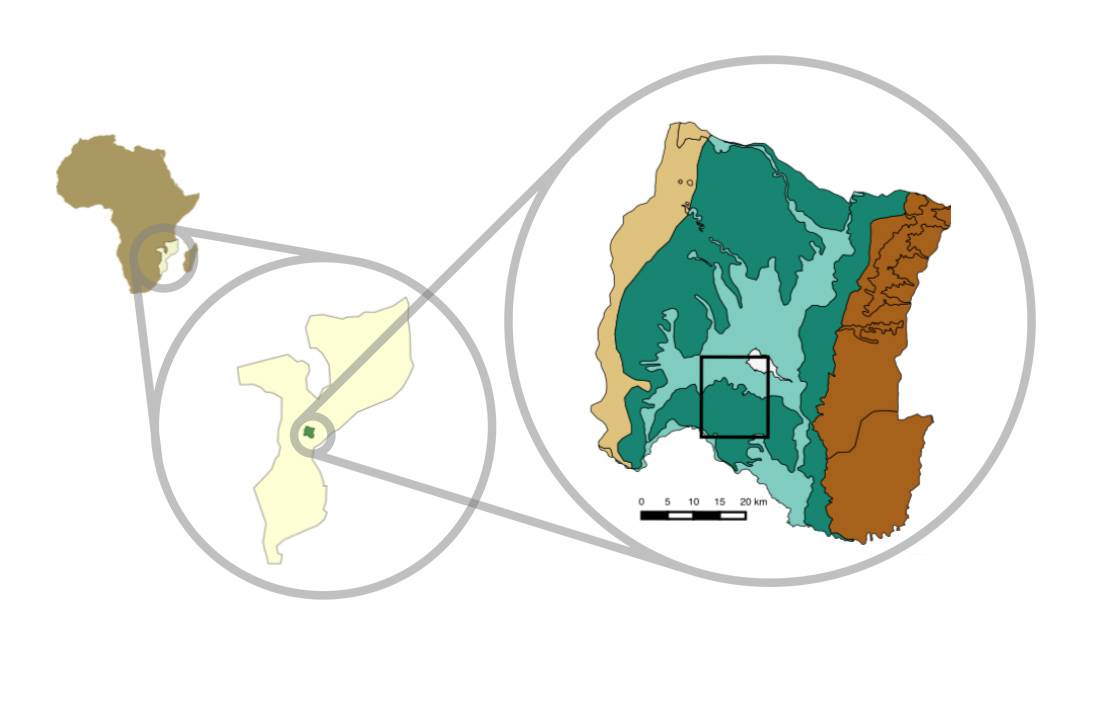 These maps of Africa, Mozambique and Gorongosa National Park show the location of the study site as well as its major habitat zones: The steep walls of the African Rift Valley are in tan and brown, the forested areas are dark green, the grassy floodplain is light green, and Lake Urema is white.

Maps courtesy of the researchers

“That’s a tragic thing, but what it does is enable us to study how behavior and ecology changes when the predators are removed,” said Robert Pringle, an associate professor of ecology and evolutionary biology and the senior author on the paper. “It’s not quite an experiment, but it’s almost like one. We found that one of the common antelope species, bushbuck, which typically is a very shy, secretive forest-dweller, has expanded out into the open plains. The plants in the plains are very nutritious, and the bushbuck that have colonized those areas are bigger and in better shape than their counterparts in the forest. And the presence of bushbuck in this new habitat has negative effects on the plants that bushbuck eat.”

All herbivores have to weigh the nutritional benefits of foraging in a certain area against the risk that they might get killed and eaten in the process. If the risk is too high, they will avoid an area, even if it is nutritionally rich. In this way, high-risk areas for herbivores become safe spaces for palatable plants. The link between herbivores' fear of carnivores and the benefits for vegetation is what ecologists call a “trophic cascade,” the term for the impact that meat-eating predators can have on plants.

“Historically, the diverse group of predators in Gorongosa were effectively keeping herbivores confined to areas with lower predation risk,” said Pringle. “The elimination of predators broke the rules that ordinarily govern where herbivores go and what they eat, and that has effects all the way through the food chain.”

The project began in 2015, when Pringle and other members of the research team observed that some bushbuck, a usually shy species of antelope native to the region, had stopped hiding in woodlands and begun frequenting the open, largely treeless grasslands on the Gorongosa floodplain. A detailed study of Gorongosa prior to the Mozambican civil war, which lasted from 1977 to 1992, had reported that bushbuck did not occur in these treeless areas. The researchers hypothesized that the elimination of the leopards, wild dogs and hyenas had created a “landscape of fearlessness,” where the formerly timid antelopes now browsed freely — to the detriment of the local vegetation. 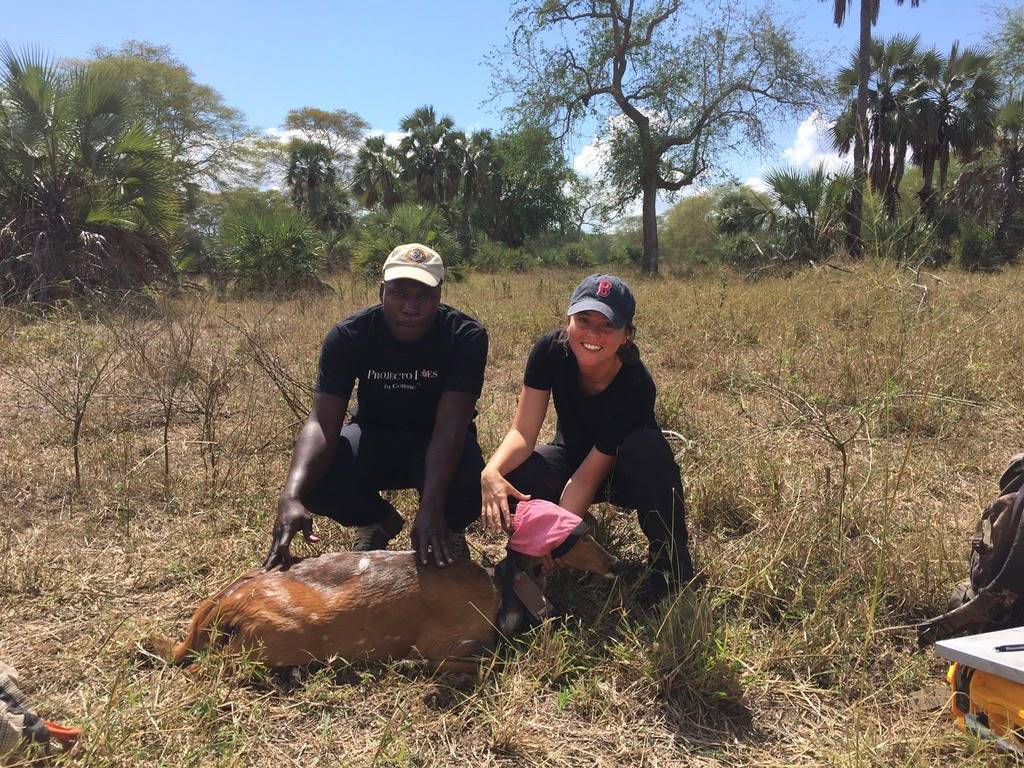 Justine Atkins, a graduate student in ecology and evolutionary biology, works with Paolo Tonecas, the park veterinarian of Gorongosa National Park, to collar and measure a bushbuck.

They spent years designing and executing a study that looked at every link in the hypothesized chain of effects between the absent predators and the plants of the Gorongosa plains. Using GPS collars and aerial censuses from 2002 to 2016, they tracked the animals’ movements and locations. They sequenced the plant DNA in bushbuck scat to determine exactly what the animals ate in different areas, and they quantified the nutritional quality of the plants in each habitat. They also measured the size, fat and muscle of captured bushbuck, while they were putting on the GPS collars, and found that eating the more protein-rich diet available on the floodplains contributed to bigger, stronger bushbuck.

“The two most important pieces of the study were two experiments that Justine performed in the field in 2016 and 2017,” said Pringle. “One was to use the sounds and scents of large carnivores to simulate risk — the idea was to try to scare the bushbuck into thinking that predators were present and see how that affected their behavior.”

Atkins played recorded leopard calls and placed artificial carnivore scat and urine so that bushbuck would hear and smell signs that their predators had returned. As predicted, bushbuck in the open plains responded to the predator cues by moving to more wooded areas that offered more hiding places. By using these cues, Atkins was able to conclude that the fear of predation, not any killing by actual predators, caused the change in bushbuck behaviors. 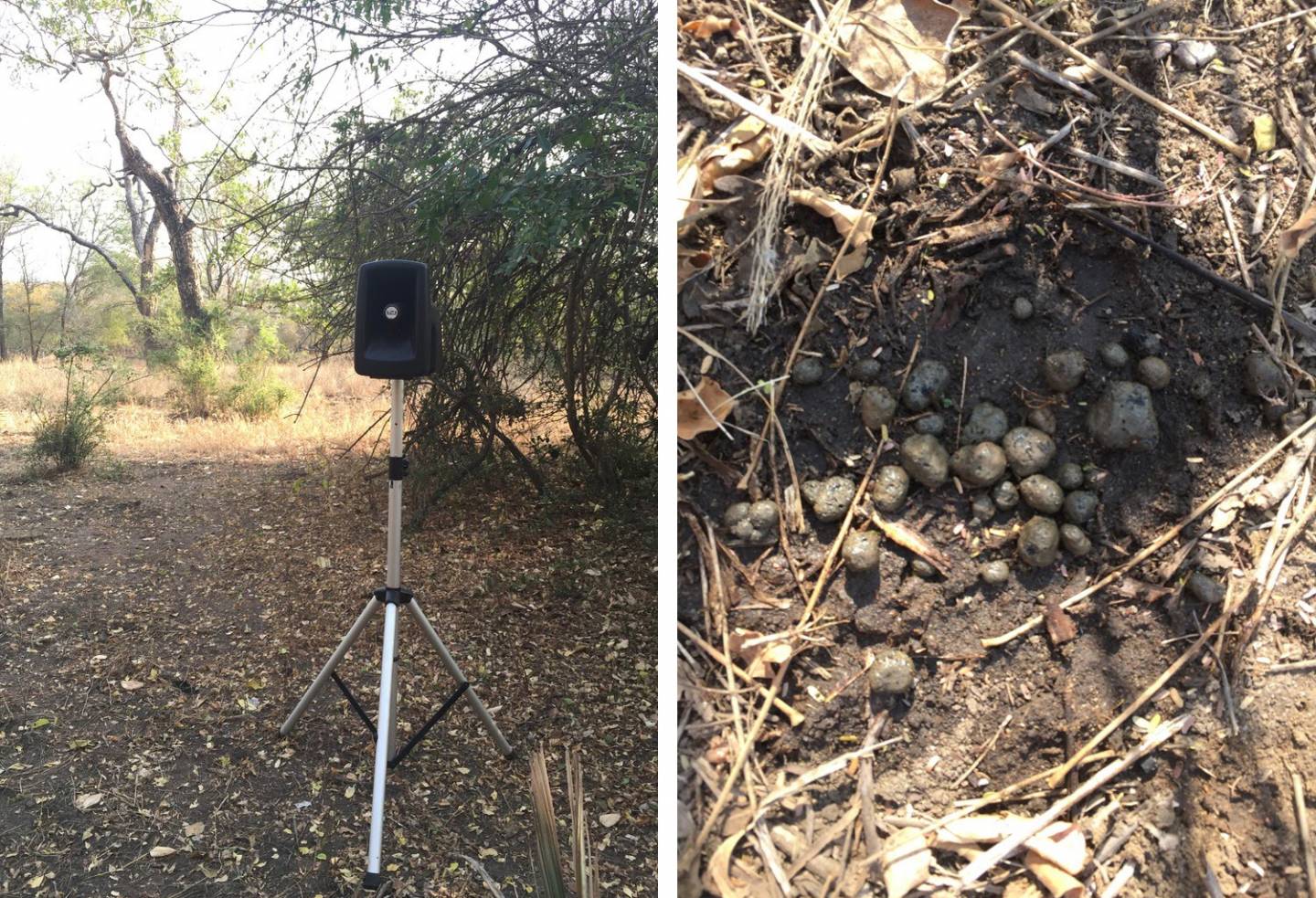 Atkins simulated the predators’ return by playing recordings of leopard calls and distributing simulated scat and urine. She used a commercially available fake lion poop product called Silent Roar and 2-phenylethylamine, which is the component of carnivore urine that has been found to elicit an innate fear response in prey species. The researchers used GPS collars to track the movements of bushbuck in the 48 hours before and after these predator simulation experiments, and they found that the herbivores in woody areas showed no changes, but bushbuck in the floodplain moved into woody areas.

“The other thing that Justine did, which was really innovative, was to use the results of our diet analysis to identify a plant that was only really eaten by bushbuck and not by other large herbivores,” said Pringle. “Then, with that knowledge, she built cages around the plants to prevent bushbuck from eating them, which enabled her to isolate the effects of bushbuck on the growth of the plant.”

She found that the plants protected from bushbuck grew rapidly, which suggests that they may rebound strongly when predators are reintroduced to the park and the bushbuck retreat to woody areas.

By combining information from a diverse range of measurements with controlled field experiments, Atkins and her colleagues successfully documented each link in the hypothesized trophic cascade.

“The research team used a series of well-designed experiments,” said Laura Prugh, an associate professor of quantitative wildlife sciences at the University of Washington, who was not involved in this research. “It is rare to have so many components of food web interactions quantified, and their research nicely sets the stage for predicting how the ecosystem will respond when carnivores are reintroduced.”

Working in Gorongosa provided an unprecedented “natural experiment” to study the effects of local predator extinction on an ecosystem of large mammals, said Corina Tarnita, an associate professor of ecology and evolutionary biology who is Atkins’ adviser and co-author.

“It enables us to explore profound theoretical concepts and questions that have previously been accessible primarily in much smaller and more controlled systems,” she said. “In most complex systems, the issue of scaling presents a non-trivial challenge: Just because something is true at small scales doesn’t necessarily make it true at larger scales. So being able to test the extent to which fundamental ecological principles scale up is invaluable.”

“Our work really underscores the importance of top carnivores, which are declining globally,” said Ryan Long, an assistant professor of fish and wildlife sciences at the University of Idaho, who was a co-author on the project. “Carnivores influence ecosystems in complex ways that go beyond just killing and eating other animals, but it can be really challenging to get experimental evidence of those kinds of effects in large-mammal systems. Our study provides a really compelling combination of observational and experimental support for the notion that large herbivores modify their behavior in response to the fear of predators, and that those changes in behavior affect both their own condition and the plant communities they rely on for food.”

“This careful study suggests that the interplay between predators, prey and the plants they eat is more flexible than previously thought,” said Michelle Elekonich, a program director at the National Science Foundation, which provided funding for this research. “By showing that human-induced disruptions to these complex interactions can be reversed, the authors have provided invaluable information to guide restoration efforts in ecosystems negatively affected by human activity.”Since the study ended, ecologists in Gorongosa have continued their restoration efforts with the support of the Greg Carr Foundation. The vanguard, a pack of African wild dogs, were reintroduced in mid-2018. 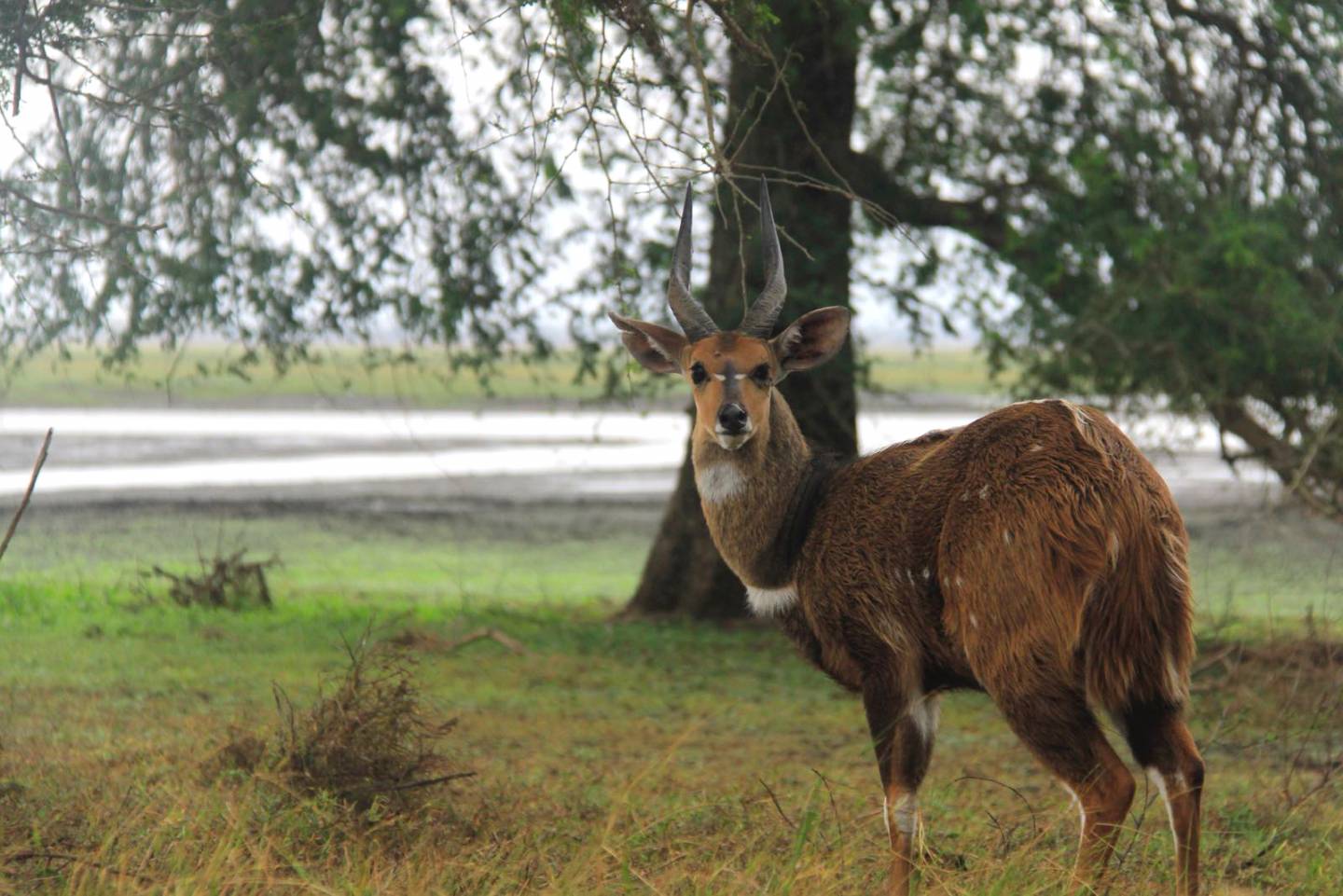 A bushbuck spots a graduate student visiting the edge of the floodplain in Gorongosa National Park.

“The first pack of African wild dogs introduced are well settled in, hunt very successfully, and mostly prey on bushbuck — especially those on the open floodplain,” said Paola Bouley, associate director of conservation at Gorongosa National Park. “They just hammer the bushbuck drifting out in the open.”

This research is “exciting confirmation we are on the right track in Gorongosa, focusing strongly on top predator recovery to bring an entire ecosystem back in to balance,” Bouley said. “We're observing one of the grandest ecological restoration stories on the planet as it unfolds.”