NANYUKI, Kenya — Princeton University graduate student Tyler Coverdale and Ryan O'Connell of the Class of 2017 clap as they walk around the tall bushes surrounding the sprawling experiment site. Not in applause, or for self-motivation — but to alert any buffalo, elephants or other animals that might be foraging for food or seeking shade from the intense equatorial sun.

This is the nature of working at the Mpala Research Centre, a multidisciplinary and multi-institutional field laboratory that sits on a 50,000-acre reserve and ranch in Laikipia County in central Kenya. For faculty, students and postdoctoral researchers, Mpala provides an expansive natural terrain, nonetheless used by humans, that is ideal for large-scale field experiments in ecology, biology, geology and other fields.

It's a place where people coexist with lush riverside woodlands and arid grasslands, and where iconic African animals roam freely. "Every day you're seeing endangered species," Coverdale said. The surrounding landscape is dotted with trees torn and broken by hungry herds of African elephants, as elsewhere females and foals of the endangered Grévy's zebra — the world's largest wild horse — slink safely into the dense vegetation. "These are mostly animals where only a few thousand of them are left in the world, and a couple hundred are at Mpala," Coverdale said.

Princeton recently expanded its long involvement with Mpala by assuming the role of managing partner, working in close partnership with the Smithsonian Institution, the Kenya Wildlife Service and the National Museums of Kenya to support the facility.

Students and other researchers at Mpala work in a setting where the human and natural worlds intersect, one of great natural beauty and diversity. A true international experience, Mpala embeds students in local schools and communities to learn about how people in pastoralist economies interact with and rely on the land and wildlife. (Photos by Morgan Kelly, video edited by Nick Donnoli, Office of Communications)

Dan Rubenstein, Princeton's Class of 1877 Professor of Zoology and professor of ecology and evolutionary biology, first came to Mpala in 1990, just after the University's connection with it began, and is on its board of trustees. In 1989, George Small of the Class of 1943 approached the University about establishing a research center on the large ranch he inherited from his brother. Since then, numerous faculty members and students from Princeton and other institutions have come here to conduct research and learn in an environment unlike any found on the typical American college campus.

"This is Princeton — it's got the specialness of Princeton in an international setting that allows students to blossom," Rubenstein said. "Mpala is a lens for seeing the world in a different way. Students grow and become much more worldly, and that is the real purpose of an international education. But it also gives students the chance to understand and learn how to do science."

Mpala is more than a research station — it's a working cattle ranch with established villages where the pastoralists, ranch hands, research assistants, security guards and the many other people who use and maintain Mpala live. Students work in a setting where the human and natural worlds intersect, and their projects frequently ripple out into the larger community, Rubenstein said. First-year Princeton students, for instance, can participate in an eight-week internship that embeds them in local schools and communities to learn about how people in pastoralist economies interact with and rely on the land and wildlife, he said. "Here, you can work on conservation issues and see how those issues play out in the real world," Rubenstein said. 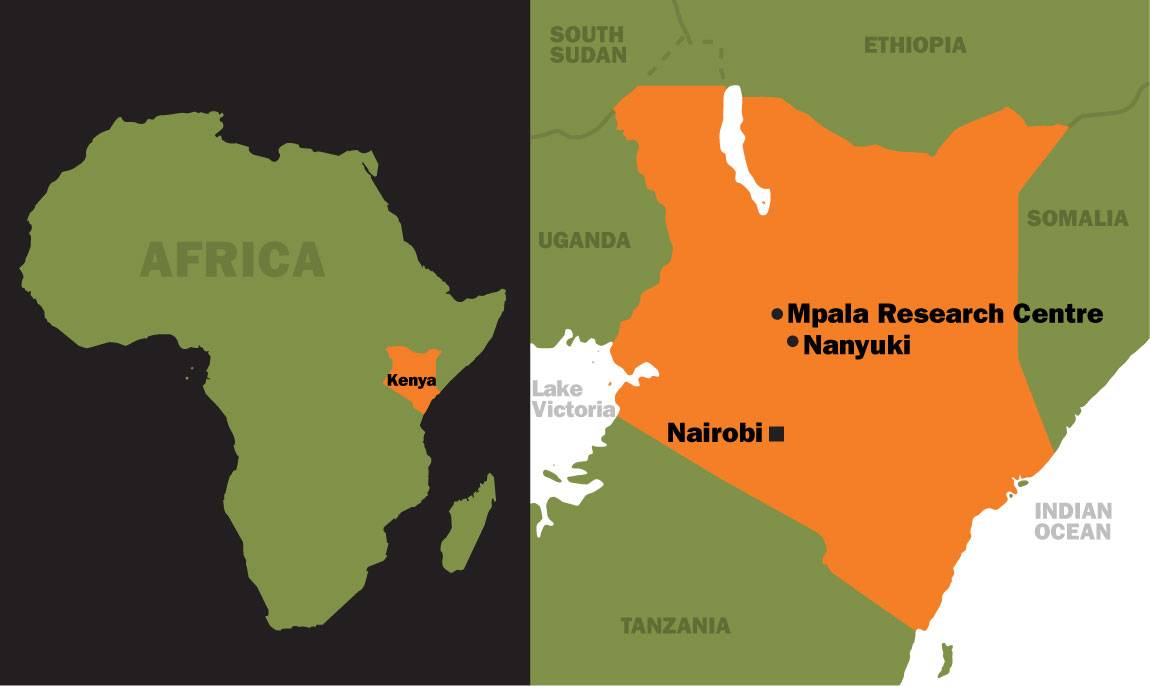 The Mpala Research Centre is in Laikipia County in central Kenya, roughly 150 miles north of Nairobi, Kenya's capital. It serves as a scientific and educational hub for the immediate area and East Africa. Researchers at Mpala can access numerous parks and preserves in the region, as well as work with the region's pastoralist tribes.

Mpala serves as a scientific and educational hub for the immediate area and for East Africa. A campaign based at Mpala and now in its second year vaccinates dogs against rabies. The project vaccinated 824 dogs in 2015 to help prevent the numerous attacks on children, adults, wildlife and domestic animals that occur each year. And in July, 20 undergraduate ecology students from Makerere University in Uganda traveled to Mpala for a week-long training in ecology and conservation.

Researchers at Mpala can access — and collaborate with — numerous parks and preserves in the region, as well as work among the region's pastoralist tribes. Julien Ayroles, an assistant professor of ecology and evolutionary biology and the Lewis-Sigler Institute for Integrative Genomics, will use Mpala as a base to study the Turkana people of northern Kenya, who live in one of the hottest places on Earth, to understand how people evolve adaptations to extreme climates.

Rubenstein, who focuses a large portion of his research on exploring how wildlife and livestock interact, recently completed the inaugural Great Grévy's Rally, the first comprehensive count of Grévy's zebras that paired citizen scientists with members of the semi-nomadic Samburu tribe. The results of that effort will be used to help local governments in Kenya preserve the animal's arid habitat.

"Every student that I know from this generation sees injustice and inequality as things that need to be eradicated," Rubenstein said. "Something like this whets their appetites. They come here and appreciate that science can inform policy and lead to actions that might mitigate some of the injustices they perceive." 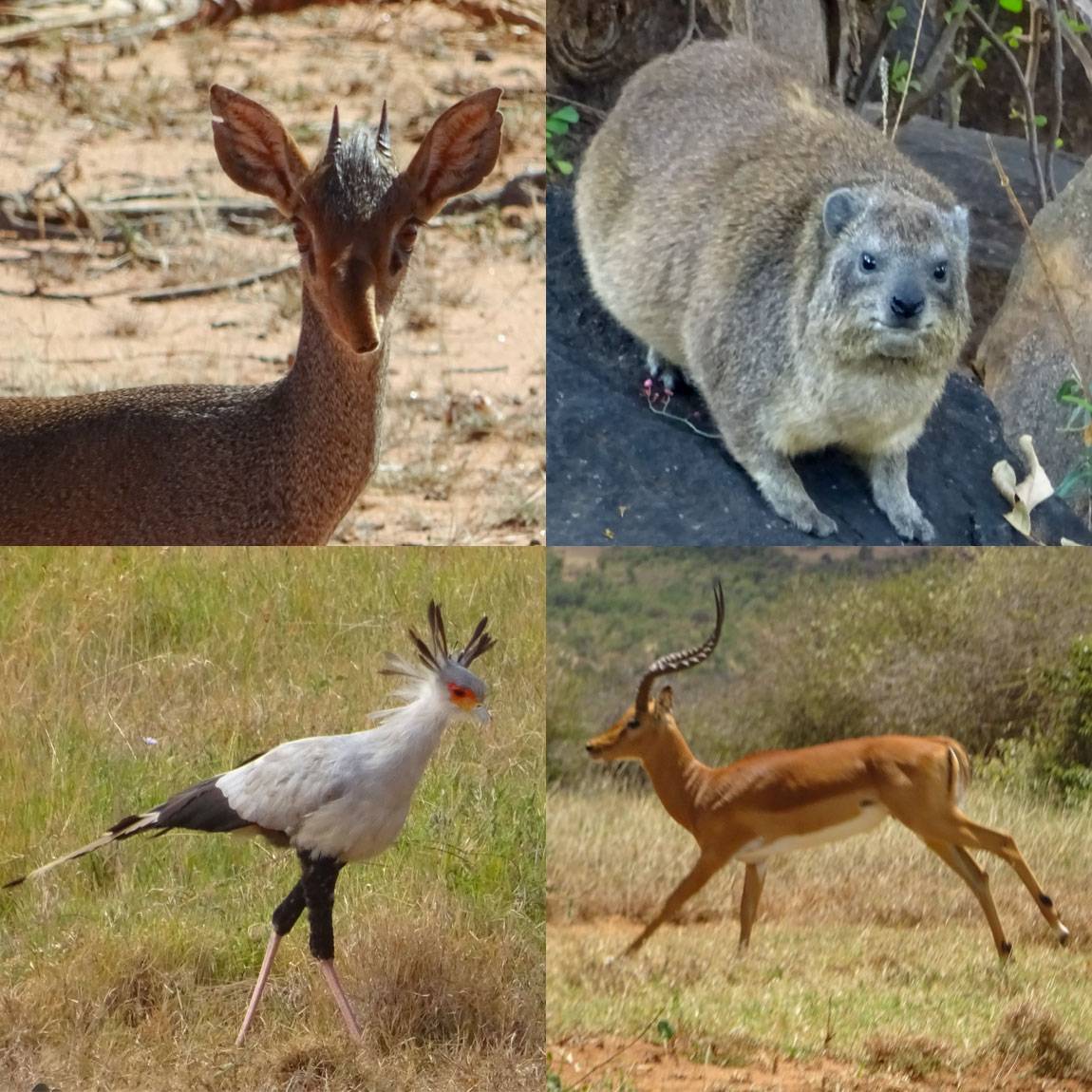 Mpala is a place where people coexist with the unique and iconic African animals that roam freely. Animals frequently found at Mpala include (clockwise from upper left) the small antelopes known as dik-diks; rock hyraxes, whose closest living relatives include elephants; impalas; and large, ornate secretarybirds. (Photos by Morgan Kelly, Office of Communications)

A dynamic ecosystem in a supportive setting

The battered pickup truck groans as Coverdale navigates the rutted and rocky road that ascends the Mpala reserve's high escarpment. The diversity of plants found in the lower-lying areas dwindles until stunted clusters of whistling thorn acacias — reaching only the shoulders of the giraffes that amble among them — dominate the plateau.

The sweeping terrain of Mpala provides Corina Tarnita, an assistant professor of ecology and evolutionary biology, the necessary room for her work. Funded by the National Science Foundation and the Princeton Environmental Institute, Tarnita and her collaborators are investigating the role of ecosystem engineers such as termites in buffering ecosystems against climate change.

Guided by theoretical predictions, Tarnita and her collaborators reported in the journal Science in 2015 that termite mounds stave off desertification in grasslands and savannas by creating moist oases of plant growth on or around them. Tarnita and Robert Pringle, a Princeton assistant professor of ecology and evolutionary biology, have since set up large, long-term rain-manipulation experiments on and off termite mounds at Mpala that will allow them to understand the mechanisms behind mound-mediated robustness in plant communities.

"Mpala is the perfect place to do this type of research," Tarnita said. "The freedom to establish such large-scale experiments is essentially unparalleled in this kind of environment."

The intact, wildlife-rich ecosystems at Mpala combined with an administrative structure designed to facilitate research and teaching distinguishes the center from other field sites in Africa, Pringle said. Pringle, who is Coverdale's Ph.D. adviser, works at Mpala because scientists there can experimentally manipulate aspects of the ecosystem to see how it responds in the long-term.

"What's unique about Mpala is that it allows us to study ecological patterns using the kinds of tools that we need to really understand the fundamental biological mechanisms underlying those patterns," said Pringle, who has conducted work at Mpala since 2004.

"You can't solve the extinction crisis or figure out how to mitigate climate change if you don't understand how these complex systems actually work, but there is nowhere else in Africa that gives scientists such a free hand to do the kinds of experiments that are necessary to distinguish pattern from process," Pringle said. "If you're a physicist, maybe you need a Large Hadron Collider; if you're an ecologist, you need an Mpala."

Coverdale, who studies plant-herbivore interactions and plant defenses, works within several large experimental wildlife "exclosure" plots. Situated in various parts of the ecosystem, these study plots use fences as a selective barrier that allows or denies access to different-sized animals. The aim is to study how plant and animal communities respond to the presence or absence of different large mammals, thereby simulating the phenomenon of wildlife decline or extinction.

As researchers work at the same sites year after year, they produce a wealth of data that scientists — including undergraduate students — can use. For instance, Jessica Castillo-Vardaro, a postdoctoral researcher who works primarily with Tarnita, uses the termite mounds at Mpala to explore how the spatial organization of termite mounds influences the genetic structure of organisms — via changing soil properties — within the surrounding ecosystem.

"To have a place where you can set up large plots right along the road, where research is the first priority, you can't get that anywhere else," Coverdale said. "To include undergraduates in that is really unique. You could easily have a place like this and keep it exclusive to graduate students, postdocs and faculty. It's an amazing place to work as a graduate student, but as an undergraduate, it's really unique. At Mpala, you can see a project you want to do and do it in the best possible way." 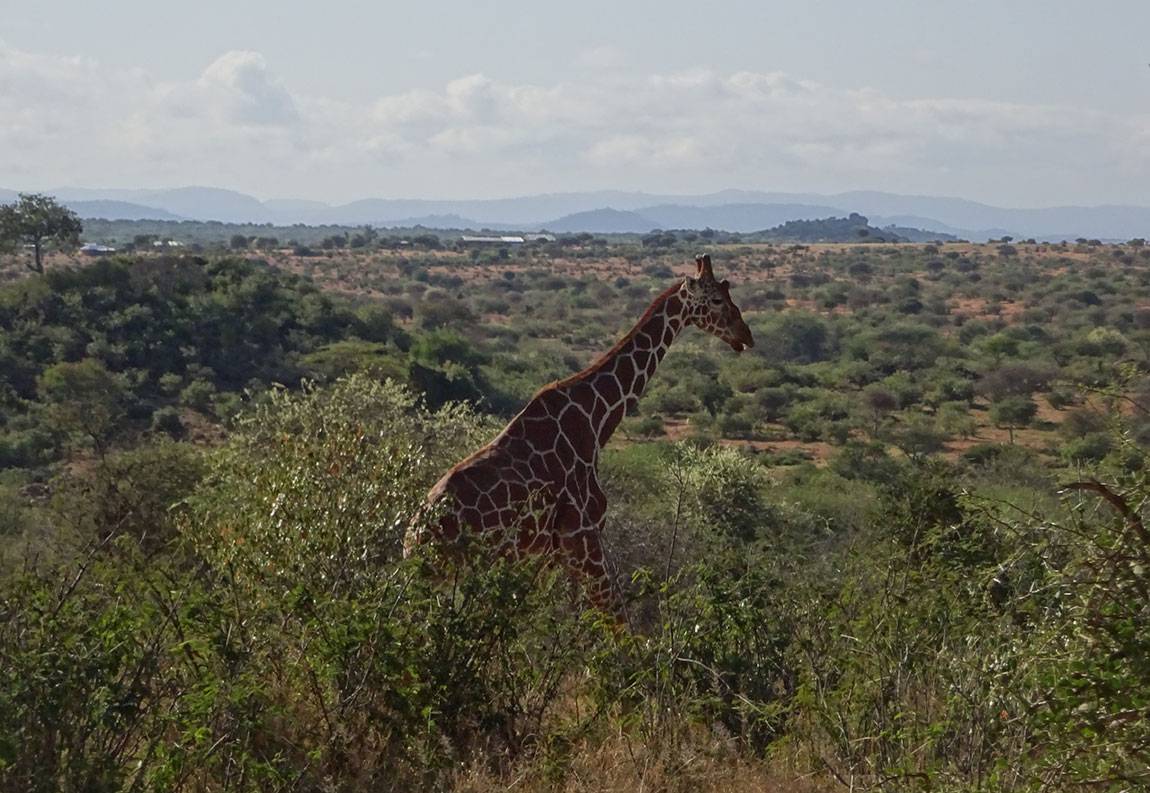 Princeton recently expanded its long involvement with Mpala by assuming the role of managing partner. George Small of the Class of 1943 approached the University in 1989 about establishing a research center on the large ranch he inherited from his brother. Although Mpala is still a working cattle ranch, its spacious and intact ecosystems distinguish it from other field sites in Africa. (Photo by Morgan Kelly, Office of Communications)

O'Connell, who is advised by Tarnita and has spent two summers at Mpala — the first as a Princeton Environmental Institute summer intern — accessed 15-20 years of data for his senior thesis on a group of climbing vines called lianas that grow rampantly when large herbivores such as elephants are absent. "It's nice that a few people set this up and now everyone has access to it, essentially," O'Connell said.

"It makes getting an undergraduate project done a lot more feasible," he said. "Princeton does a great job of making these opportunities available to undergraduates. There are a lot of interesting questions you can ask here, which makes it a great place for undergraduates to come, especially."

A distinguishing feature of Mpala is that researchers are provided housing, meals, laundry service and other necessities so that they can fully devote their time to research, Rubenstein said. The center's main area contains approximately 130 beds in two buildings and a nearby campground, as well as a laboratory, offices, a dining room and kitchen and classrooms. All drinking water and most other water used at the center is harvested from rainwater.

"Providing a good infrastructure can transform the way you do science," said Rubenstein, who recalled his years of camping in national parks throughout Africa and allotting several hours a day to just surviving. "When you're coming here and your days are precious few, you want every day to count, and so we built Mpala to be a full-service research center. It all goes back to the center's mission of helping people become better scientists."