NANYUKI, Kenya — The small airplane bobbed and tilted in the midday heat rising off the Kenyan bushland as it quickly dropped onto the short red-dirt airstrip. Zebras grazed in the runway's grassy margins alongside gazelles and hulking, spear-horned oryx. Elephants milled about the dense trees and shrubs at the narrow end of the landing strip just before the escarpment plunges into the deep valley below.

On his first international trip as Princeton provost, David S. Lee traveled this summer with a delegation from the University to visit the Mpala Research Centre, a multidisciplinary field-research station located in Kenya's Laikipia County. Lee went with Pablo Debenedetti, dean for research; Paul LaMarche, vice provost for space programming and planning; and Anastasia Vrachnos, vice provost for international affairs and operations. 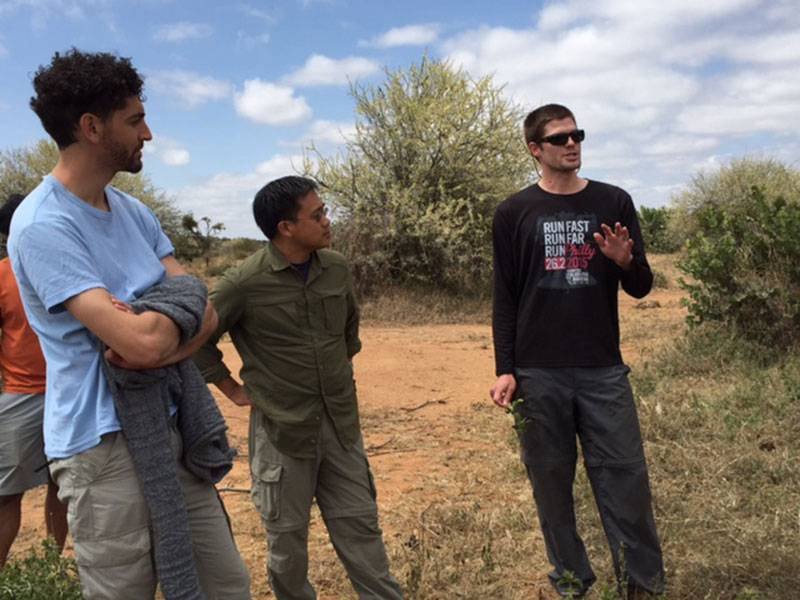 On his first international trip as Princeton provost, David S. Lee (center) visited the Mpala Research Centre, a multidisciplinary field-research station in Kenya. Lee met Princeton faculty and students conducting research, such as Tyler Coverdale (right), a graduate student in ecology and evolutionary biology who studies plant-herbivore interactions and plant defenses. Julien Ayroles (left), an assistant professor of ecology and evolutionary biology and the Lewis-Sigler Institute for Integrative Genomics, will use Mpala as a base to study how people evolve adaptations to extreme climates. (Photo by Anastasia Vrachnos, Office of the Provost)

Lee visited the Mpala Research Centre Aug. 31-Sept. 2 to meet with Princeton faculty and students conducting research there, and to learn more about the center's operations and facilities. Princeton works in close partnership with the Smithsonian Institution, the Kenya Wildlife Service and the National Museums of Kenya to support the facility. Mpala is the primary research site for several Princeton faculty members and graduate students whose work is supported by the National Science Foundation (NSF). It also hosts 15-20 Princeton undergraduate students a year for internships and study abroad.

"The Mpala Research Centre is a remarkable partnership that enables Princeton scientists, and those from other institutions, to conduct world-class research in biodiversity, conservation, sustainable livelihoods, and, increasingly, climate change and public health," Lee said.

"It also enhances Princeton's mission of broadening international experiences for students," Lee said. "Undergraduates, whatever major they are, learn a lot from the work they do here. Interacting with the people here and being in this very different environment is an important experience at many levels."

"As a researcher, I come here and I see all the wonderful questions that can be asked," said Debenedetti, the Class of 1950 Professor in Engineering and Applied Science and professor of chemical and biological engineering. "It's striking how many possibilities there are to do important field research at Mpala. I am very, very excited about expanding the scope of what's going on here to other disciplines." 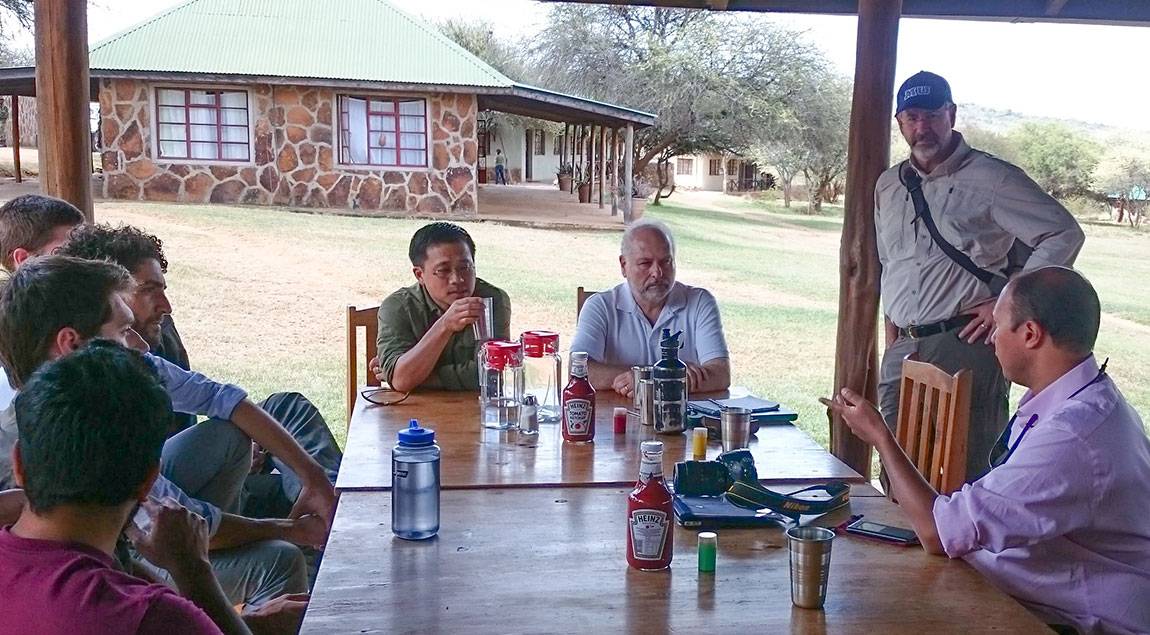 At Mpala, the Princeton delegation heard from scientists and students who described the research they carry out on-site, including studies of wildlife, water quality and forest diversity. Adam Ferguson, an NSF fellow, presented his project to vaccinate dogs in local communities against rabies, which has helped reduce the number of rabies fatalities — primarily of children — in the area to zero.

Dan Rubenstein, Princeton's Class of 1877 Professor of Zoology and professor of ecology and evolutionary biology, and director of the Program in Environmental Studies, discussed his effort to conduct the first accurate census of the endangered Grévy's zebra by using pattern-recognition software he helped develop.

"Having a research site that is part of a living landscape, where people, herds and wildlife coexist, allows scientists to pose novel and penetrating questions about ecological, evolutionary and behavioral dynamics," Rubenstein said. "Emerging from this new knowledge come breakthroughs and applications that can address some of Kenya's most pressing problems in conservation, resource management and sustainable development."

Tyler Coverdale, a graduate student working with Robert Pringle, a Princeton assistant professor of ecology and evolutionary biology, took Lee, Debenedetti and the Princeton group deep into the dusty grasslands and expanses of thorny acacia trees to see the large-scale ecology experiments that help make Mpala unique. They visited a series of 36 10,000 square-meter (107,639 square-foot) plots collectively known as UHURU that provide years of continuous data for scientists, including undergraduate students. "Something like this that you have access to as an undergraduate, a graduate student or a postdoc you really don't have anywhere else," Coverdale said.

Ryan O'Connell of Princeton's Class of 2017 conducted the fieldwork for his senior thesis, which combines theoretical modeling, field observations and experimental work, in the UHURU plots. "Mpala's research infrastructure and collaborative working environment make it an incredibly unique site to conduct field studies," said O'Connell, who is advised by Corina Tarnita, an assistant professor of ecology and evolutionary biology, and first visited Mpala as a Princeton Environmental Institute summer intern before returning to conduct additional thesis research.

"Mpala's ability to host interns, as well as a semester-long study-abroad program, is an incredible asset for Princeton's undergraduate education," Vrachnos said. "These kinds of research experiences and international experiences transform undergraduate students' perspectives and ripple through their intellectual and personal development, often shaping their independent research and what they hope to do after they graduate." 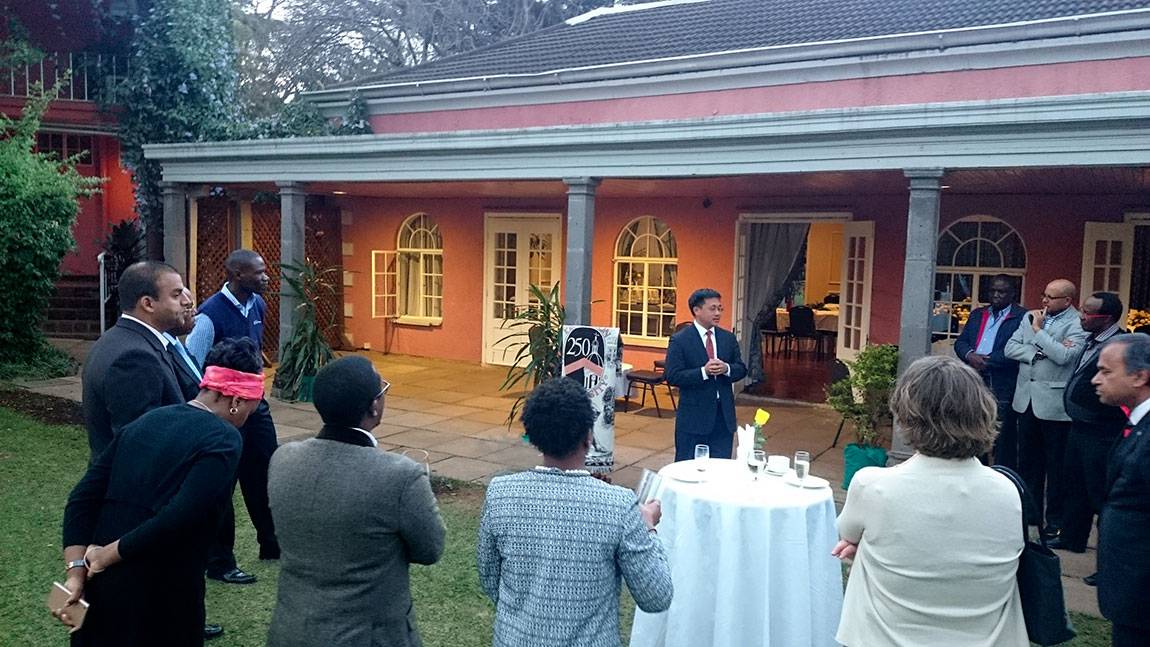 After visiting Mpala, the Princeton delegation attended an alumni reception in Nairobi, Kenya's capital, where Lee shared insights about his visit to the research center. The event followed a roundtable discussion with Kenyan business leaders about entrepreneurship and the opportunities and challenges facing entrepreneurs in the country. (Photo by Morgan Kelly, Office of Communications)

After visiting Mpala, the Princeton delegation attended an alumni reception in Nairobi Sept. 2 where Lee and Debenedetti shared insights about their visit to the research center. The event followed a roundtable discussion with Kenyan business leaders about entrepreneurship and the opportunities and challenges facing entrepreneurs in the country. The discussion, "Entrepreneurship: A Critical Pathway to Kenya's and Africa's Economic Development," was organized by Princeton alumni Francis Okomo-Okello, a 1990 graduate of the master in public policy program at the Woodrow Wilson School of Public and International Affairs, and John Kashangaki, who received his master in public affairs from Princeton in 1992.

"It was quite important for the visiting delegation to have a sense of what the real Kenya is like, to meet the real players in the economic space and hear their ideas," Okomo-Okello said. "This was meant to introduce the Princeton delegation to the wider Kenyan thought leaders — I think that was accomplished today."

"I'm inspired by the commitment of the Princeton alumni I met in Kenya and I was grateful for the perspectives on entrepreneurship that our roundtable shared." Lee said, reflecting on the visit. "I'm also very pleased to have seen firsthand the opportunities that Mpala enables for our scholars and students, and to have shared, however briefly, the perspective they gain from being able to work in such a stimulating environment." 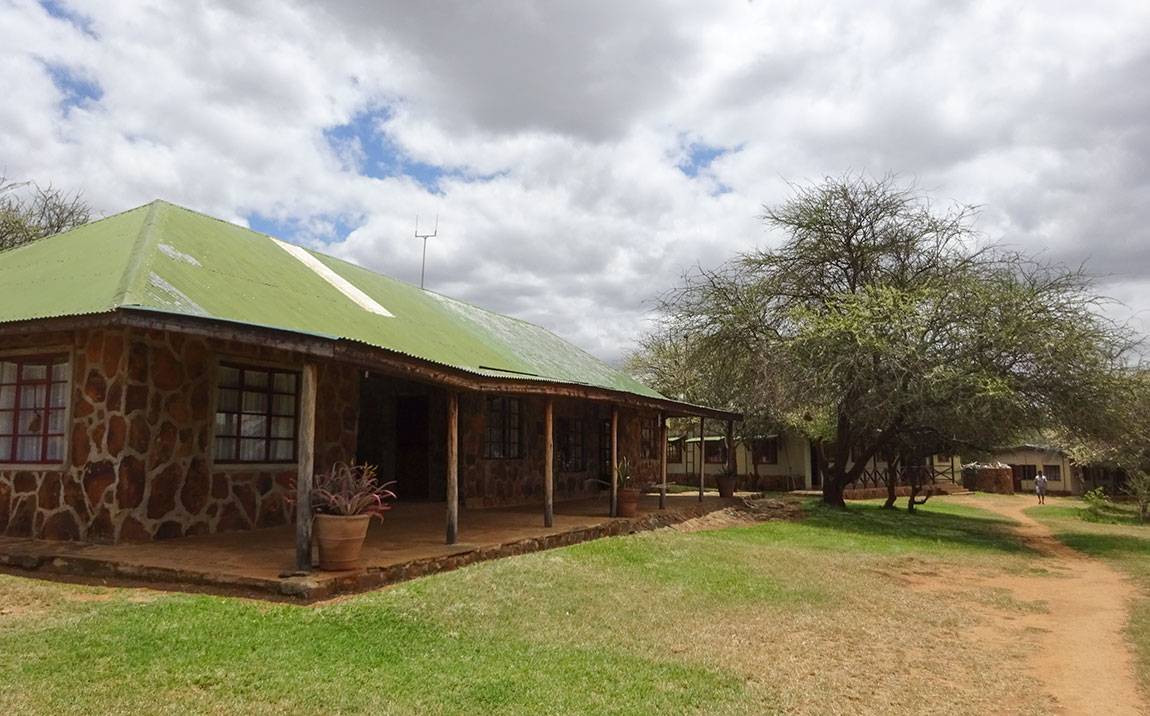 Princeton works in close partnership with the Smithsonian Institution, the Kenya Wildlife Service and the National Museums of Kenya to support the Mpala Research Centre. Lee and the Princeton delegation learned more about the center's operations and facilities, which consist of approximately 130 beds, as well as a laboratory, offices, a dining room, kitchen, classrooms and internet. All drinking water and most other water is harvested from rainwater, and Mpala has begun using solar energy for electricity and heat. (Photo by Morgan Kelly, Office of Communications) 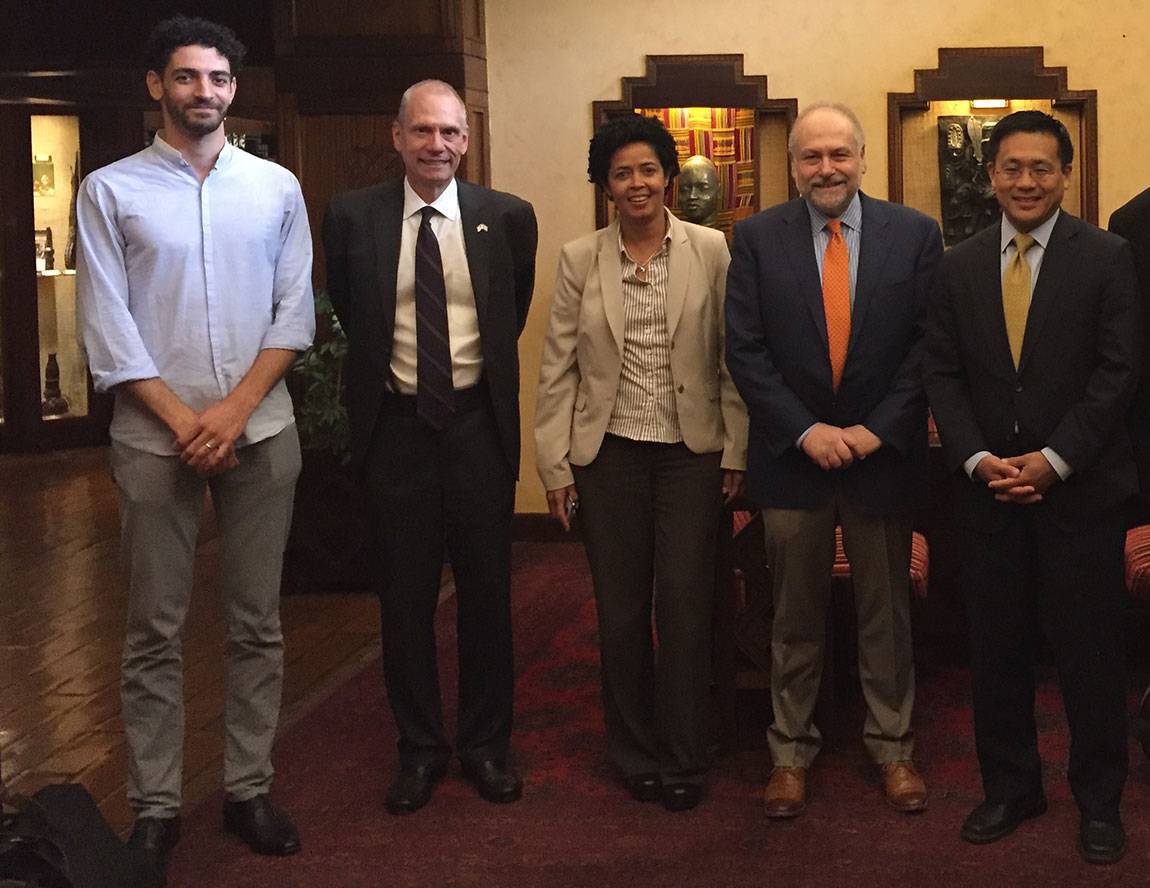 Lee and the Princeton group met with U.S. Ambassador to Kenya Robert Godec (second from left) and spoke informally with U.S. Ambassador to Somalia Stephen Schwartz. Also pictured are, from left, Ayroles; Paula Kahumbu, who received her Ph.D. in ecology and evolutionary biology from Princeton in 2002 and is now CEO of the Kenya-based conservation group Wildlife Direct; Debenedetti and Lee. (Photo by Anastasia Vrachnos, Office of the Provost)