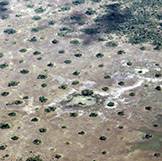 Princeton University research suggests that termite mounds can help prevent the spread of deserts. Savannas, grasslands and other "dryland" ecosystems with termite mounds can survive on significantly less rainfall than those without mounds, the researchers found. Vulnerable to "desertification," drylands are found in many South American, Asian and African countries, such as Mozambique (above).

Termites might not top the list of humanity's favorite insects, but new research suggests that their large dirt mounds are crucial to stopping the spread of deserts into semi-arid ecosystems and agricultural lands. The results not only suggest that termite mounds could make these areas more resilient to climate change than previously thought, but could also inspire a change in how scientists determine the possible effects of climate change on ecosystems.

In the parched grasslands and savannas, or drylands, of Africa, South America and Asia, termite mounds store nutrients and moisture, and — via internal tunnels — allow water to better penetrate the soil. As a result, vegetation flourishes on and near termite mounds in ecosystems that are otherwise highly vulnerable to "desertification," or the environment's collapse into desert.

Princeton University researchers report in the journal Science that termites slow the spread of deserts into drylands by providing a moist refuge for vegetation on and around their mounds. They report that drylands with termite mounds can survive on significantly less rain than those without termite mounds. The research was inspired by fungus-growing termites of the genus Odontotermes, but the theoretical results apply to all types of termites that increase resource availability on and/or around their nests.

Corresponding author Corina Tarnita, a Princeton assistant professor in ecology and evolutionary biology, explained that termite mounds also preserve seeds and plant life, which helps surrounding areas rebound faster once rainfall resumes. "The rain is the same everywhere, but because termites allow water to penetrate the soil better, the plants grow on or near the mounds as if there were more rain," Tarnita said.

"The vegetation on and around termite mounds persists longer and declines slower," she said. "Even when you get to such harsh conditions where vegetation disappears from the mounds, re-vegetation is still easier. As long as the mounds are there the ecosystem has a better chance to recover." 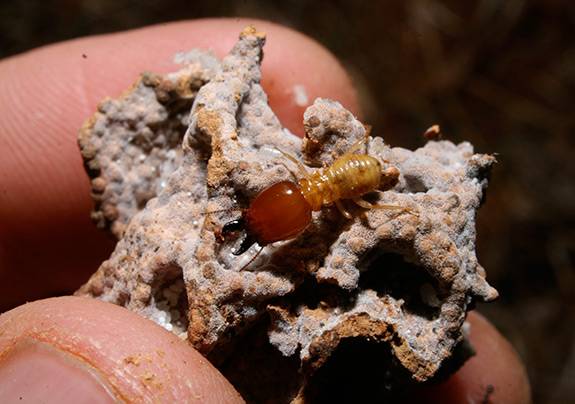 Termite mounds store nutrients and moisture, and allow water to better penetrate the soil. As a result, vegetation flourishes on and near termite mounds. The research was inspired by fungus-growing termites from the genus Odontotermes (pictured), but the theoretical results apply to all types of termites that increase resource availability on and/or around their nests. (Photo by Robert Pringle, Department of Ecology and Evolutionary Biology)

Jef Huisman, an aquatic microbiology professor and theoretical ecologist at the University of Amsterdam in the Netherlands, said that the Princeton research shows that recently proposed early-warning signals for the desertification of arid ecosystems can be too simple, and possibly result in projections of future climate change that do not account for the complexity of nature. Huisman is familiar with the study, but was not involved in it.

For grasslands and savannas, for instance, five stages mark the transition to desert, each having a distinct pattern of plant growth. Scientists use satellite images to determine which stage a savanna is in and which stage it is heading toward, Huisman said.

The Princeton researchers, however, found that these plant-growth patterns exist on a much smaller scale than previously thought, one of centimeters. Overlaying them is the pattern of termite mounds covered by dense vegetation, which is on the scale of tens of meters. 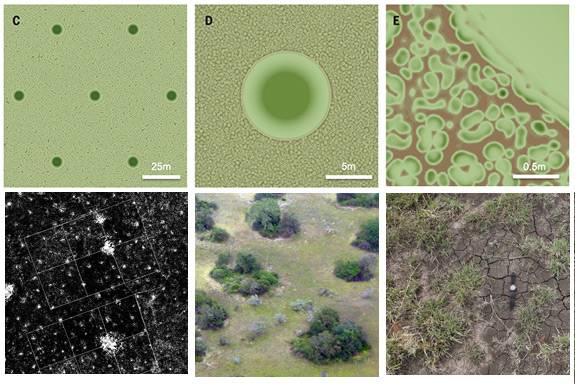 The Princeton research shows that interactions between species (in this case, termites and plants) may play a major role in modulating and governing the impacts of climatic change. The researchers used a mathematical model and field observations to determine that drylands with termite mounds have two pattern-inducing mechanisms at work, as opposed to just the one that has been used in prior analyses of dryland desertification. Termite mounds self-organize to form a pattern on the scale of tens of meters (top and bottom left). The dense vegetation on each mound (top and bottom center) gradually thins, moving outward from the mound's center. Off the mounds, vegetation self-organizes to form a pattern on the scale of centimeters (top and bottom right), which prior models suggest can be used to determine the extent of desertification in drylands without termites. (Model images courtesy of Science/AAAS. Photos, left to right, by DigitalGlobe and courtesy of Truman Young, University of California-Davis; by Marc Stalmans, Gorongosa National Park; and by Robert Pringle, Department of Ecology and Evolutionary Biology)

The termite-mound pattern, however, looks deceptively similar to the last and most critical of the five stages that mark the transition of drylands to desert, Tarnita said. The scientific literature contains two different mechanisms for a similar pattern — one stems from vegetation self-organizing in response to limited rainfall, and the other results from bustling termite mounds improving the lives of nearby plants. But these mechanisms are not necessarily mutually exclusive in drylands, Tarnita said.

"That made me wonder if more than one mechanism is responsible for vegetation dynamics in dryland ecosystems, as is often the case in nature," Tarnita said. "We created a mathematical model that revealed that these mechanisms can co-exist, but likely at different scales. It pointed to where we should look in nature to find the nested patterns that eventually led us to empirically confirm that both mechanisms are indeed at play."

Thus, Huisman said, Tarnita and her co-authors showed that vegetation patterns that currently might be interpreted as the onset of desertification could mean the total opposite — that plants are persevering thanks to termite mounds.

"The coexistence of multiple patterns at these scales makes ecosystems more robust and less prone to collapse, and that is the significance of this study," Huisman said. "In that sense, we have to adjust our models for drylands because these ecosystems are much more resistant to desertification than we previously believed."

Furthermore, climate models for every ecosystem need to better account for organisms such as termites and mussels that "engineer their own environment," Huisman said.

"This is an eye-opening study that says we really need to investigate these ecosystems in more detail and incorporate all these other mechanisms before we can say what will lead to a catastrophic collapse in ecosystem function," Huisman said. "We should always be humble in our model predictions because nature can always be more complex than we initially anticipate."

Robert Pringle, an assistant professor in ecology and evolutionary biology at Princeton and co-author of the Science paper, said that the unexpected function of termites in savannas and grasslands suggests that ants, prairie dogs, gophers and other mound-building creatures could also have important roles in ecosystem health.

"This phenomenon and these patterned landscape features are common. It's not always termites causing them, but they may very well have similar effects on the ecosystem," Pringle said. "However, exactly what each type of animal does to the vegetation is hard to know in advance. You'd have to get into a system and determine what is building the mounds and what are the properties of the mounds."

The current research stems from a 2010 paper published in the journal PLoS Biology, of which Pringle was first author. The authors of that study reported that termite mounds are "hotspots" of plant growth and animal activity that decreases the farther one gets from the mound. They also found that the mounds were evenly spaced from one another and created a larger area of biological abundance.

"I like to think of termites as linchpins of the ecosystem in more than one way," Pringle said. "They increase the productivity of the system, but they also make it more stable, more resilient."

The mathematical model developed for the latest work determines how termite mounds affect plant growth by applying various tools from physics and mathematical and numerical analysis to understand a biological phenomenon, said first author Juan Bonachela, a former postdoctoral researcher in the research group of co-author Simon Levin, Princeton's George M. Moffett Professor of Biology. Bonachela is now a lecturer in the Department of Mathematics and Statistics at Strathclyde University in Scotland.

The model allowed Bonachela and his colleagues to apply small-scale observational data broadly to understand how rainfall influences vegetation growth and persistence in the presence and absence of termites across an entire ecosystem.

"Similar studies would be extremely challenging to perform in the field and would require very long-term experiments," Bonachela said. "Models such as this allow us to study the focal system with almost no constraint of time or space, and explore a wide range of environmental conditions with a level of detail that cannot be attained in the field."

In drylands, termite mounds can be important resources for other animals. They can provide a source of lush vegetation for zebras and other foraging herbivores (left), or serve as a vantage point for predators to spot prey over the tall grass of the savanna. (Photos by Robert Pringle, Department of Ecology and Evolutionary Biology)

The research relied on the various skills and expertise of the co-authors, Tarnita said. The co-authors included Efrat Sheffer, a postdoctoral research associate advised by Lars Hedin, Princeton professor and department chair of ecology and evolutionary biology, and by Levin; Tyler Coverdale and Jennifer Guyton, doctoral students in Pringle's group; and Kelly Caylor, an associate professor of civil and environmental engineering. Observational data for the study was collected at the Mpala Research Centre in Kenya, a multi-institutional research preserve with which Princeton has been long involved.

"It's a great example of interdisciplinary synergy," Tarnita said. "The team effort was really crucial to this work — each co-author played a vital role. The study started with the theory, which began with discussions between Rob [Pringle] and me and later with input from Kelly [Caylor] and Simon [Levin]. It really took shape once Juan [Bonachela] started to analyze the model and the results were validated with the empirical data collected by Jen [Guyton] and Tyler [Coverdale], and analyzed by Efrat [Sheffer]."

To continue their work, Tarnita, Pringle and collaborator Dan Doak, a professor of environmental studies at the University of Colorado-Boulder, are initiating field experiments to test key theoretical predictions as part of research on spatial patterning funded by the National Science Foundation.

The paper, "Termite mounds can increase the robustness of dryland ecosystems to climatic change," was published Feb. 6 in the journal Science. This work was a product of National Science Foundation (NSF) grant DEB-1355122. Additional support was provided by a Princeton Environmental Institute Grand Challenges grant; the National Geographic Society (grant no. 9291); the NSF (grant nos. EAR-0847368 and DEB-0816453); the Andrew W. Mellon Foundation; and a John Templeton Foundation Foundational Questions in Evolutionary Biology grant (no. RFP-12-14).