by Angela Page for the Princeton Environmental Institute

In 2011, satellite images of the African savannas revealed a mystery: these rolling grasslands, with their heavy rainfalls and spells of drought, were home to significantly fewer trees than researchers had expected. Scientists supposed that the ecosystem's high annual precipitation would result in greater tree growth. Yet a 2011 study found that the more instances of heavy rainfall a savanna received, the fewer trees it had.

To this ecological riddle, Princeton University researchers might have finally provided a solution. In a study published in the Proceeding of the National Academy of Sciences, researchers use mathematical equations to show that physiological differences between trees and grasses are enough to explain the curious phenomenon.

The researchers found that under very wet conditions, grasses have an advantage because they can quickly absorb water and support high rates of photosynthesis, the process by which plants convert sunlight into energy. Trees, with their tougher leaves and roots, are able to survive better in dry periods because of their ability to withstand water stress. But this amounts to a disadvantage for trees in periods of intense rainfall, as they are comparatively less effective at utilizing the newly abundant water. 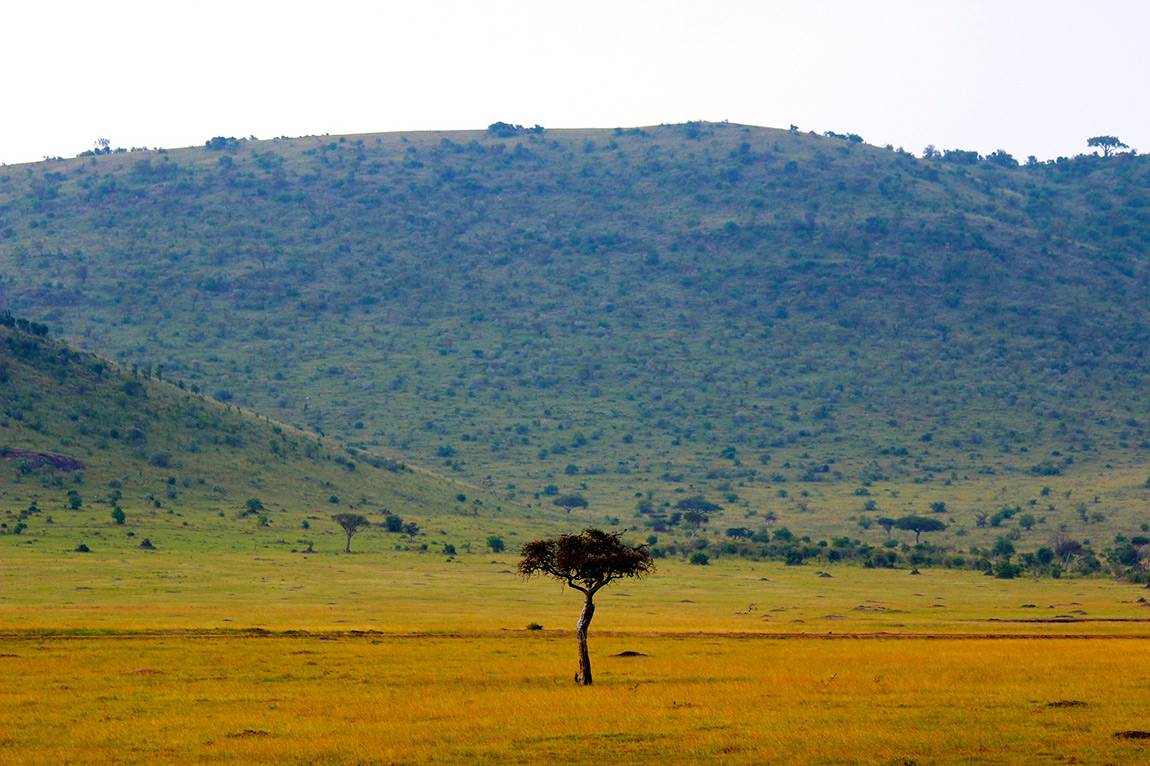 Princeton University researchers might have finally provided a solution to the ecological riddle of why tree abundance on Africa's grassy savannas diminishes in response to heavy rainfall despite scientists' expectations to the contrary. The researchers found that the ability of grasses to more efficiently absorb and process water gives them an advantage over trees such as the acacia (pictured). (Photo by Kev Moses, Licensed under CC BY 2.0.)

"A simple way to view this is to think of rainfall as annual income," said first author Xiangtao Xu, a graduate student in the laboratory of second author David Medvigy, a Princeton assistant professor of geosciences. "Trees and grasses are competing over the amount of money the savanna gets every year and it matters how they use their funds."

Xu explained that when the "bank" is full with rain, grasses, which build relatively cheap structures, thrive. When there is a deficit of rain, the trees suffer less than grasses and therefore win out.

The problem is that several high-profile papers over the past decade have predicted that periods of intense rainfall will become more frequent around the globe, especially in tropical areas, Xu said. The Princeton research suggests that these global climate changes will eventually lead to a reduced abundance of trees on the savannas.

"Because the savanna takes up a large area, which is home to an abundance of both wild animals and livestock, this will influence many people who live in those areas," Xu said. "It's important to understand how the biome would change under global climate change."

The study highlights the importance of understanding the pattern and intensity of rainfall, not just the total annual precipitation, which is where most research in this area has focused, Xu said. In 50 years, a region may still experience the same overall amount of precipitation. If the intensity changes, however, that will affect the abundance of grasses and trees. This, in turn, will influence the herbivores that subsist on them, and other animals in the biome — essentially, affecting the entire ecosystem.

Xu, Medvigy and co-author Ignacio Rodriguez-Iturbe, Princeton's James S. McDonnell Distinguished University Professor of Civil and Environmental Engineering, created a numerical model that mimicked the actual mechanistic functions of the trees and grasses. They put in equations for how both plants photosynthesize, absorb water and even steal water from one other. These equations were coupled with a random rainfall generator based on rainfall parameters derived from field observations across the savanna.

This configuration allowed the team to observe how the plants would respond under different climate conditions. Past analyses of the savanna have only considered annual or monthly rainfall, but understanding how rainfall is distributed in different areas on a daily scale is critical in the savanna, Xu said. Daily rainfall intensity determines who will win in a competition between grasses and trees for the finite resource of water.

"We put realistic rainfall schemes into the model, then generated corresponding grass or tree abundance, and compared the numerical results with real-world observations," Xu said.

The researchers then tested the model using field measurements from a well-studied savanna in Nylsvley, South Africa, and nine other sites along the Kalahari Transect, which is a sort of border of atmospheric and climate activity in southern Africa. The researchers also used remote-sensing data across the whole continent. For each site, the model accurately predicted the tree abundance that the researchers observed.

Gaby Katul, a professor of hydrology and micrometeorology at Duke University, said that the Princeton research makes apparent the local effect of rainfall variation on plant dominance and an ecosystem's composition.

"This work offers evidence of how shifts in rainfall affect the tree-grass interaction because rainfall variations are large," said Katul, who was not involved in the research. "The approach can be used not only to 'diagnose' the present state where rainfall pattern variations dominate but also offers a 'prognosis' as to what may happen in the future."

The researchers' finding that grasses win out in periods of intense rainfall rejects the long-held theory of root-niche separation, Xu said, which predicts that trees will outcompete grasses under intense rainfall when the soil becomes saturated because their heavy roots penetrate deeper into the ground.

"This hypothesis ignores the fact that grasses and trees have different abilities for absorbing and utilizing water," Xu said. "And that's one of the most important parts of what we found. Grasses are more efficient at absorbing water, so in a big rainfall event, grasses win."

Xu said it would be difficult to predict whether changes in grass and tree distribution would have a positive or negative impact on the savanna. But he did say that more grasses mean more support for cows and horses and other herbivores. On the other hand, fewer trees mean less carbon dioxide is removed from the atmosphere, and a loss of habitat for birds and other animals that rely on the trees.

The model does, however, offer an entry point for better policies and decisions to help communities adapt to future changes. "It's just like with the weather," Xu said. "If you don't read the weather report, you have to take what nature gives you. But if you know in advance that it will rain tomorrow, you know to bring an umbrella."

The paper, "Relation between rainfall intensity and savanna tree abundance explained by water use strategies," was published Oct. 5 by the Proceedings of the National Academy of Sciences. The work was supported by the Princeton Environmental Institute and the Andlinger Center for Energy and the Environment at Princeton University.