Researchers have captured video showing how pieces of DNA once thought to be useless can act as on-off switches for genes.

These pieces of DNA are part of over 90 percent of the genetic material that are not genes. Researchers now know that this "junk DNA" contains most of the information that can turn on or off genes. But how these segments of DNA, called enhancers, find and activate a target gene in the crowded environment of a cell's nucleus is not well understood.

Now a team led by researchers at Princeton University has captured how this happens in living cells. The video allows researchers to see the enhancers as they find and connect to a gene to kick-start its activity. The study was published in the journal Nature Genetics.

A time series of images reveals how a DNA segment known as an enhancer can turn on, or activate, its target gene. The image shows two cells from a living fly embryo. The enhancer (blue) must come in close proximity to the gene (green) to turn on gene activity (pink).

Analyses of how enhancers activate genes can aid in the understanding of normal development, when even small genetic missteps can result in birth defects. The timing of gene activation also is important in the development of many diseases including cancer.

“The key to curing such conditions is our ability to elucidate underlying mechanisms,” said Thomas Gregor, an associate professor of physics and the Lewis-Sigler Institute for Integrative Genomics. “The goal is to use these rules to regulate and re-engineer the programs underlying development and disease processes.”

As their name suggests, enhancers switch on the expression of other genes. In the mammalian genome, there are an estimated 200,000 to 1 million enhancers, and many are located far away on the DNA strand from the gene they regulate, raising the question of how the regulatory segments can locate and connect with their target genes.

Many previous studies on enhancers were conducted on non-living cells because of the difficulty in imaging genetic activity in living organisms. Such studies give only snapshots in time and can miss important details.

In the new study, researchers used imaging techniques developed at Princeton to track the position of an enhancer and its target gene while simultaneously monitoring the gene's activity in living fly embryos.

"This study provides the unique opportunity to observe in real time how two regions of DNA interact with each other,” said Michal Levo, a postdoctoral research fellow in the Lewis-Sigler Institute. “We can monitor in time where the enhancer and the gene are physically located and simultaneously measure the gene’s activity in an attempt to relate these processes." 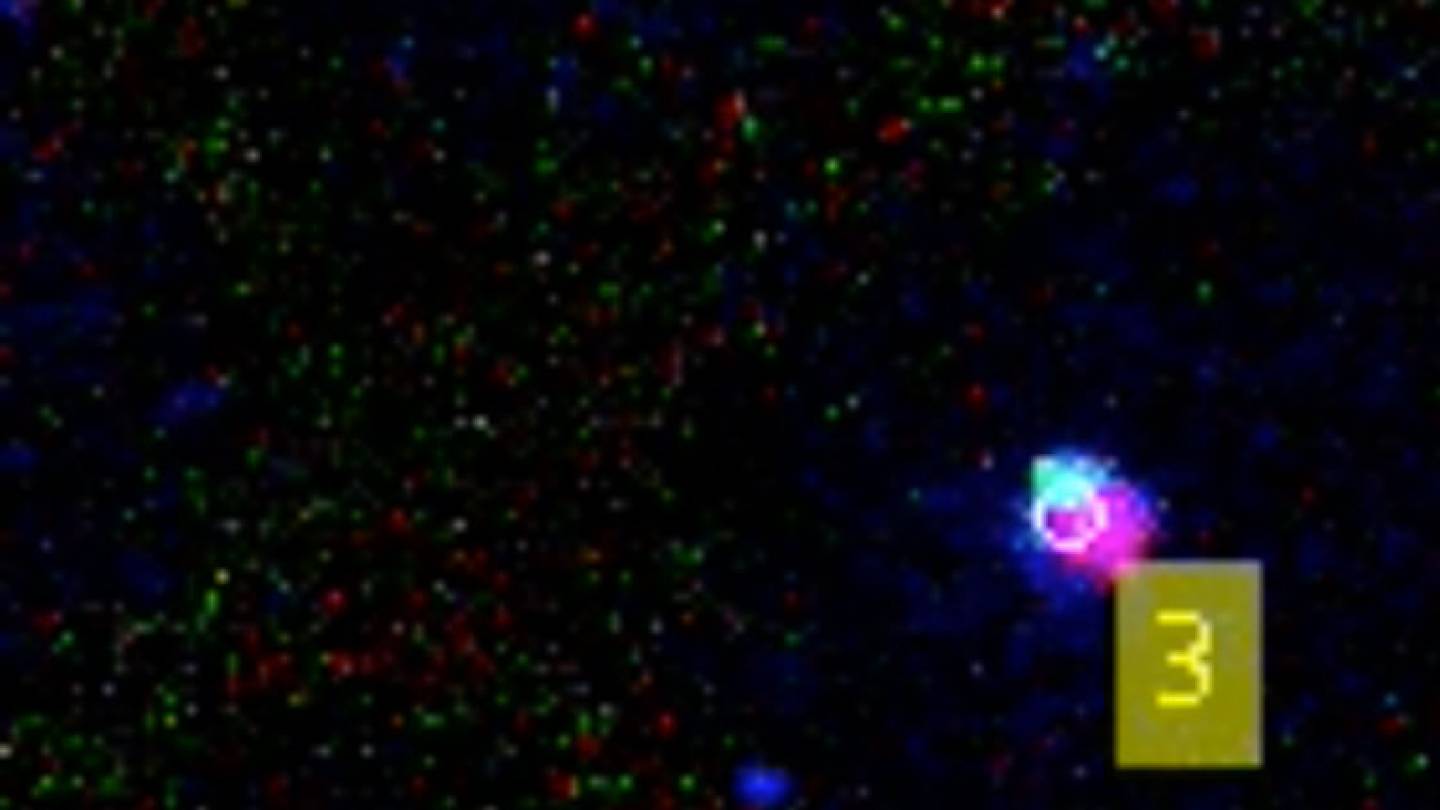 Using an imaging technique developed at Princeton, researchers captured the moment when a segment of DNA — from genetic material that was once thought to be useless junk — turns on a target gene. The video shows the DNA segment, known as an enhancer (blue), as it approaches the gene (green) and activates it (red). The study reveals that close proximity between the enhancer and the gene is necessary to kick-start the activity of the gene.

The video demonstrates that physical contact between the enhancer and the gene is necessary to activate transcription, the first step in reading the genetic instructions. The enhancers stay connected to the gene the entire time it is active. When the enhancer disconnects, gene activity stops.

The researchers also found that during transcription, the structure formed by the enhancer and gene becomes more compact, suggesting a change in the DNA in that region.

Given that there can be numerous genes between the enhancer and its target, it is remarkable that enhancers can reach the exact target at the right time for that gene to become active, the researchers said.

The team believes that the solution may be found in the DNA’s unique wrapping within our cells. The enhancer and gene may be a half-inch apart when DNA is stretched out in a line, but when packed into the cell, with specific proteins facilitating physical interactions, they could be considerably closer.

"Through this study, we can look at the relationship between the DNA's structural configurations and gene activation," said Hongtao Chen, a postdoctoral research fellow in the Lewis-Sigler Institute and lead author on the study.

The video provides evidence against a favored model known as the “hit-and-run model,” where the enhancer does not need to stay attached to the gene during transcription.

The team also showed that sometimes the enhancer and gene met and connected but gene activation did not occur, a finding they plan to explore further.

To capture video of an enhancer contacting a gene, Chen attached fluorescent tags to the enhancer and its target gene. The enhancers examined are those of a gene called eve, and they give rise to a pattern of seven stripes that forms on the surface of the developing embryo after about three hours.

Additionally, Chen attached a separate fluorescent tagging system to the target gene that lights up when the gene is activated and undergoes transcription to produce an intermediary readout of the genetic code, a molecule called RNA. Gregor's team at Princeton previously developed a method of adding fluorescent tags to RNA as it is being created to obtain a real-time readout of gene expression in fly embryos.

The study included work by Lev Barinov, a graduate student in molecular biology at Princeton, and Miki Fujioka and James Jaynes at Thomas Jefferson University. Gregor is affiliated with both Princeton and the Institut Pasteur in Paris.