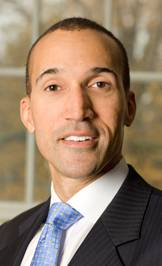 Logan Powell, who has served in senior admission positions at Bowdoin College and Harvard University, has been appointed director of admission at Princeton. His appointment was effective Dec. 12.

Reporting to Dean of Admission Janet Rapelye, Powell is responsible for the daily operations of the undergraduate admission office and management of the admission staff. He will coordinate student recruitment and selection processes, working with Rapelye to develop and implement strategies to enhance the diversity of incoming classes, while overseeing staffing issues and managing the office's technology systems.

"Our search committee was impressed with all Logan has accomplished in the world of admissions before he came to Princeton," Rapelye said. "Logan has worked in offices that have made selective admission decisions, and he brings a perspective from within the field that will be especially useful in processing our significant and robust applicant pool and choosing the best class for Princeton, beginning with the class of 2012. He's a quick study in understanding what we're about and applying what he knows to our selection process."

Powell earned bachelor's degrees in biology and sociology from Bowdoin and a master's degree in higher education from Harvard with a focus on administration, planning and social policy.

He succeeds Christopher Watson, who was appointed dean of undergraduate admission at Northwestern University.