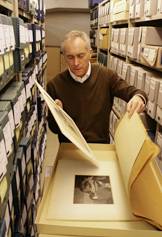 Alumnus A. Scott Berg spent months delving into the Woodrow Wilson papers at the Seeley G. Mudd Manuscript Library last semester for his upcoming Wilson biography. In addition, he taught 16 undergraduates about biographical writing from the ground up in a class called "Life Writing."

Below left:  Berg holds a photograph of Wilson used in his 1910 campaign for governor of New Jersey. Although he has been researching and thinking about Wilson for 35 years, he hasn't yet reached a final conclusion about his view of Wilson's life for his upcoming book. "I'm a bit like a jury, and I haven't come to a verdict," Berg said. "That happens at the word processor, when I actually sit down to write."

In the fall of 1967, on his second day as an undergraduate at Princeton, A. Scott Berg walked over to Firestone Library and asked to take a look at F. Scott Fitzgerald's handwritten draft of "The Great Gatsby."

"I held it in my hands and went through it," said Berg, for whom Fitzgerald was an idol. "I wanted to get my hands on his things."

Holding that manuscript and examining Fitzgerald's words — his neatly drawn cursive letters, written in pencil on unlined, worn paper and littered with crossouts and additions — Berg discovered what he wanted to do with his life: write biographies.

Forty years — and a lifetime spent writing biographies — later, Berg came back to Princeton's libraries to examine the papers of another Princeton legend and another of his high school heroes: Woodrow Wilson.

Berg spent the fall semester on campus as the Harold McGraw Professor in the Council of the Humanities, teaching a class on biographical writing and poring through the Wilson papers at the Seeley G. Mudd Manuscript Library. Berg's biography of Wilson, so far untitled, is slated to be published by G.P. Putnam's Sons.

Berg won a Pulitzer Prize for his 1998 book "Lindbergh," about aviator Charles Lindbergh. He also is the author of "Goldwyn: A Biography," about film mogul Samuel Goldwyn, and "Max Perkins: Editor of Genius," a biography of the noted book editor that grew out of Berg's Princeton thesis and went on to win the National Book Award.

"After 'Lindbergh,' my publisher asked whom I wanted to write about next," Berg recalled. "I said, 'There's one idea I've been carrying in my hip pocket for 35 years. It's Woodrow Wilson.'"

His editor loved the idea, and in 2000 Berg began to turn a lifelong interest in Wilson into formal study. Berg read works by and about those close to Wilson, learned more about the period in which he lived, and visited houses where Wilson lived and other important locations in his life. He also perused the 69-volume "Papers of Woodrow Wilson," published by Princeton University Press, which contain all the important letters, speeches, interviews, press conferences and public papers on Wilson. They were assembled and annotated by Arthur Link, who taught at Princeton for more than 30 years. Next on Berg's to-do list was delving into the Wilson papers at Mudd Library.

"Mudd is the mother ship of Woodrow Wilson studies," said Berg, who graduated from Princeton in 1971 and served as an alumni trustee from 1999 to 2003. In addition to material about Wilson's college career and his tenure as a faculty member and then president of Princeton, Mudd has photocopies of almost every known Wilson paper, including everything of substance in his presidential archives. Equally valuable for Berg are documents in Mudd's collections that belonged to figures who corresponded with Wilson or wrote about him.

The proximity to Wilson's papers — and to the town where he lived for so many years — has been inspiring for Berg.

"Wilson's presence is so vibrant on this campus," said Berg, who lives in Los Angeles. "One literally walks in his footsteps."

Berg is often asked why he is writing about a figure that has already been so thoroughly examined by scholars. Wilson, who was born in 1856 in Staunton, Va., was a member of Princeton's class of 1879 and returned to the University in 1890 as a professor. He was selected as Princeton's president in 1902, serving for eight tumultuous years and introducing several bold concepts for teaching and residential life before departing in 1910 to run for governor of New Jersey, a race he won. He was elected president of the United States in 1912 and served two terms.

"There are hundreds of books about Woodrow Wilson, but I have an image of him in my mind that is unlike any picture I have seen anywhere else, based on material at Princeton and 35 years of researching and thinking about him," Berg said.

But he isn't ready yet to articulate that vision.

"I'm a bit like a jury, and I haven't come to a verdict," Berg said. "That happens at the word processor, when I actually sit down to write." 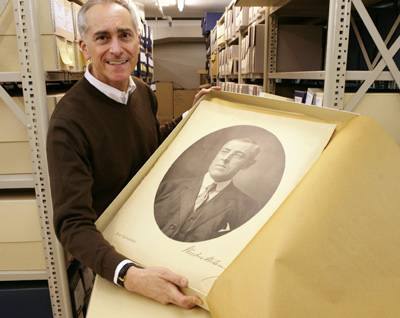 Using a life to shed light on the times

In addition to laying the foundation for his own writing by conducting research at Mudd, Berg gave 16 undergraduates the opportunity to learn about biographical writing from the ground up.

The students started with "Plutarch's Lives," which covers powerful figures of ancient Greece and Rome, and proceeded to James Boswell's "Life of Johnson," about the 18th-century English writer Samuel Johnson, and Doris Kearns Goodwin's biography of Franklin and Eleanor Roosevelt, "No Ordinary Time." The students in the class, "Life Writing," also dipped into works that are not strictly considered biographies, such as Ernest Hemingway's "A Moveable Feast" and Eugene O'Neill's "Long Day's Journey Into Night."

"We approached biographies from all angles, studying a different aspect — diaries, memoir, psychological biographies, objective biographies — each week," said Berg, who also gave lectures on the writing process at several campus events this fall, including a Friends of the Library reception and a master's dinner at Butler College.

Students wrote their own pieces in the styles the class examined and met with Berg individually every other week to go over their work.

"I loved meeting with Professor Berg because he conveyed so much confidence in our abilities, but always managed to suggest how we could improve our style or our angle," said senior Edward Hoa. "He would say that the most important quality as a writer is empathy; that we must understand not only what we observe, but what the person we interview or profile experienced. Biography is not simply an agglomeration of the facts, but a feeling of truth. I value that lesson."

In addition to discussing the many works the students read, Berg also talked about the biographies he has written. He recounted anecdotes from the many hours he spent talking with actress Katharine Hepburn, about whom he penned the book "Kate Remembered," which was published in 2003.

"As a seasoned biographer, Berg shared with us his insider's scoop on the do's and the definitely don't's when interviewing people," said senior Nicole Velasco. "He taught us that writing about a life isn't just about the individual. Each piece we wrote was expected to answer the question: 'How does this life illuminate the times?' The course was an immensely rewarding experience."

With his research nearly complete, Berg has returned to California to begin writing.

"I told the students the most important part of the process is not the research and not the writing," Berg said. "It's the moment right in between, when you assess all the material you've got — really look at it — and ask, 'Is this gold, or is it pyrite?'"

When Berg asked himself if he was prepared to conclude his research on Wilson and embark on the writing, he recalled the words of Carlos Baker, a renowned biographer and former professor of English at Princeton who served as a mentor to Berg when he was a student.

"I used to ask him, 'When will I know it's time to write?'" Berg recalled. "And he would say, 'Think of yourself as a cloud. For years you're just going to gather moisture — gather, gather, gather. Then one day you're going to start precipitating. Words are going to start raining out of you.' And that's what's happening. I'm starting to drip."