Tilghman trip to Asia ends on a high note 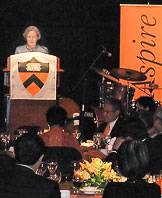 President Shirley M. Tilghman spoke during a kickoff event in Hong Kong for alumni and friends for Aspire, Princeton's $1.75 billion fundraising campaign. She also met with education and government representatives and hosted a conference with prominent alumni from the region during her March 13-16 visit to Hong Kong. It marked the conclusion of Tilghman's weeklong visit to Asia, which also included stops in Singapore and Shanghai.

At left: Sam Wang, Princeton associate professor of molecular biology, led a session titled "Welcome to Your Brain: The Neuroscience of Jet Lag, Love and Other Curiosities of Everyday Life." Wang, who also is affiliated with the Princeton Neuroscience Institute, is the co-author of "Welcome to Your Brain: Why You Lose Your Car Keys But Never Forget How to Drive and Other Puzzles of Everyday Life" published this month by Bloomsbury.

President Shirley M. Tilghman completed her weeklong trip to Asia with a visit to Hong Kong Thursday through Sunday, March 13-16, that featured a conference with prominent alumni from the region who are influential in shaping commerce and finance around the world as well as a campaign kickoff event.

Tilghman visited Asia to learn more about the future of the region and increase awareness of the exceptional educational opportunities available at Princeton. She previously has traveled there as president of Princeton and as a member of a senior-level scientific delegation.

While in Hong Kong, she met with education leaders and government officials. She also brought together Princeton researchers and prominent alumni living there in support of goals to maintain close ties with the region and to explore issues related to the global economy. 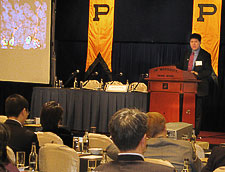 Among those scheduled to participate in the Saturday conference were Hong Kong businessmen Andy Yan and William Fung, and also Sir Gordon Wu. Yan, a 1990 Princeton graduate alumnus, is head of Asia's leading venture capital fund, Soft Bank Asia Infrastructure Fund, and was an economist with the World Bank and a research fellow at the State Commission for Economic Restructuring of the State Council of China. Fung, a 1970 Princeton alumnus, heads the global manufacturing firm Li & Fung. Wu, a 1958 Princeton alumnus, has led his company, Hopewell Holdings, to become one of the largest civil construction companies in Asia, building roads, bridges, buildings and power plants.

Tilghman also hosted a kickoff event for alumni and friends for Aspire, Princeton's $1.75 billion fundraising campaign that was launched on campus in November. Entertainment was provided by the University's Jazz Composers Collective, directed by Anthony D.J. Branker.

Before arriving in Hong Kong, Tilghman traveled to Singapore and Shanghai, where she also met with education and government representatives.

Tilghman meeting with education and government leaders in Asia

Wu gifts promote excellence in engineering and across campus