Wu gifts promote excellence in engineering and across campus 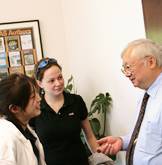 Sir Gordon Wu (right), a member of the class of 1958 and a business leader in Asia, spent a day on campus May 14 celebrating 25 years of extraordinary support to the University. His agenda included a meeting with current students in the Friend Center for Engineering Education. Wu, who made his first major gift to Princeton in 1981, completed payments this year on a historic gift of $100 million that he pledged in 1995 to support the School of Engineering and Applied Science. The gift is the second largest in Princeton's history.

Below left: Wu spoke with undergraduate engineering students during his visit, asking them about their majors and extracurricular activities and giving them advice about making decisions. Seated to his left is his wife, Lady Ivy Wu.

Wu, a member of the class of 1958, completed payments this year on a historic gift of $100 million that he pledged in 1995 to support the School of Engineering and Applied Science. The gift is the second largest in Princeton's history; in 2006, Peter B. Lewis, a member of the class of 1955, gave $101 million to support the creative and performing arts.

"Sir Gordon's generosity has touched every corner of the University," said President Shirley M. Tilghman. "Students eat in Wu Hall at one end of campus and engage in world-changing engineering research at the other. He has opened doors for hundreds of students to study here and then go forth to make their own contributions to society, and he has provided the infrastructure for research that protects the environment, improves health care, and lays the foundation for critical new technologies." 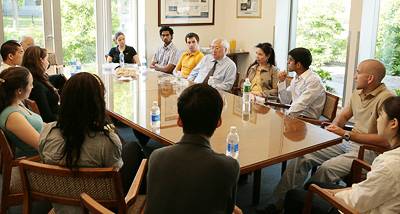 "The Princeton experience -- the education and the ideals of excellence and service -- has been an enduring part of my life," Wu said. "My wish is to honor those ideals and ensure that future generations receive the same and even greater opportunities."

Wu made his first major gift to Princeton in 1981 to create the Gordon Wu '58 Professorship of Chinese Studies. Two years later he supported the construction of Wu Hall, the dining facility at the heart of Butler College. Over the next decade, he created another endowed professorship and donated $7.5 million to support construction of Bowen Hall, which houses the laboratories for materials science.

His $100 million gift launched the five-year 250th Anniversary Campaign, and brought his lifetime donations to more than $118 million. The gift set in motion many advances in engineering research and education, including more endowed professorships, support for extensive renovations and new construction, and funds that so far have provided first-year fellowships to 109 graduate students and lab start-up support to many newly hired faculty members.

Wu said he made each of his gifts in response to University leaders who requested support for their highest priorities. He particularly credited the leadership of Presidents Bowen and Shapiro and the vision of former Dean of Engineering James Wei. "It has been a pleasure to answer Princeton's call," he said.

With the completion of his most recent gift, the University has created the Wu Fund for Excellence and Innovation in Engineering to support research and teaching initiatives.

"I made this gift to help Princeton engineering reach a new level of excellence," he said. "President Tilghman and Dean Vince Poor have an outstanding vision for how faculty and students will work together to solve some of the world's most pressing problems, and I want them to use this gift as they see fit. This is an investment in great minds."

"I am very grateful for Sir Gordon's generous support and the confidence he has placed in Princeton," Poor said. "Just as his projects have transformed the infrastructure of Asia, his gift to Princeton is building an extraordinary new capacity to help solve societal problems around the globe."

Gordon Ying Sheung Wu was born in Hong Kong in 1935. After attending Princeton, where he earned a degree in civil engineering, he began a family construction business. In 1969, he formed Hopewell Holdings, which he led to become one of the largest civil construction companies in Asia, building roads, bridges, buildings and power plants. Queen Elizabeth of England knighted him in 1997 in honor of his contributions to Asian infrastructure. He is married to Lady Ivy Wu and has four children, including Thomas and June, who are Princeton alumni.

In 2008, Wu plans to return to Princeton for his 50th class reunion. "Princeton provided me wonderful opportunities and allowed me to grow and learn," he said. "I always enjoy coming back and seeing how the University also moves forward and pursues great goals."

Tilghman trip to Asia ends on a high note