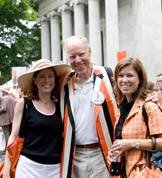 Jay Sherrerd, with daughters Anne Sherrerd (left), a 1987 Princeton graduate alumna, and Susan Sherrerd, a member of the University's class of 1986, at Reunions. Photo: Steve Freeman

A major donation to the University by the late John J.F. Sherrerd, a 1952 alumnus and longtime Princeton supporter, has funded construction of a building for emerging fields of study at the intersection of engineering and the social sciences.

The building, to be named Sherrerd Hall, will provide a home for the Department of Operations Research and Financial Engineering (ORFE) and the Center for Information Technology Policy, two rapidly growing areas aimed at improving decision-making in business and government related to risk and information technology.

"The research and teaching that will come together in this building bring many fields of knowledge to bear on important questions in business, finance, public policy and technology," said President Shirley M. Tilghman. "Jay Sherrerd long understood the value of collaboration in his years of service to Princeton, and his gift will provide us not only a place for these interactions to flourish, but also a beautiful addition to the campus."

The University is completing construction of Sherrerd Hall, which is located along Shapiro Walk, across from the Friend Center for Engineering Education. Faculty began moving in Sept. 5, and a dedication ceremony is planned for the spring. It was designed by Frederick Fisher and Partners, a prominent Los Angeles architectural firm with award-winning projects throughout the United States and abroad. A portion of the funding for the building is being provided by the Sherrerd Foundation, a family trust.

"Our father was fascinated by the application-oriented research conducted by ORFE faculty and students, particularly as it related to finance, which was his profession and passion for so many years," said his daughter, Susan Sherrerd, a 1986 alumna.

His other daughter, Anne Sherrerd, who earned a master's degree in architecture from Princeton in 1987, added that she thought her father would have chosen ORFE as his major if it had existed when he was a student. "He was delighted to provide the funding for this elegant building in support of these exciting and innovative programs," she said.

Known as "Jay" to friends and family, Sherrerd studied economics at Princeton. After serving in the U.S. Army during the Korean War, he earned an MBA from the Wharton School of the University of Pennsylvania and entered the investment banking field. In 1969, he co-founded Miller, Anderson & Sherrerd, a Philadelphia-based investment management firm that is now part of Morgan Stanley.

Sherrerd was one of very few people who have served on Princeton's Board of Trustees for two 10-year terms as a charter trustee. He was a dedicated fundraiser for Princeton, serving as a longtime member of the national Annual Giving Committee and leading many Annual Giving campaigns on behalf of the class of 1952. He played leadership roles in the University's last three capital campaigns, including co-chairing the 250th Anniversary Campaign, which raised a record $1.14 billion.

Sherrerd made a number of major donations to Princeton over the years, including gifts to support financial aid and athletics and to establish a professorship in economics in 1988. His wife, Kathleen, who died in 2005, served on the advisory council of the University Art Museum and, along with her husband, was a generous supporter of the museum.

Sherrerd died after a long illness at his home in Bryn Mawr, Pa., on April 9. He was 78.

In addition to his daughters, he is survived by a son, Jay Sherrerd Jr., and six grandchildren. Two of his grandchildren are also Princetonians: Alexandra Arader, who graduated this past June, and Michelle Arader, who is a junior.

Both programs that will reside in Sherrerd Hall exemplify the teaching and research envisioned for the School of Engineering and Applied Science as it undergoes significant growth, said H. Vincent Poor, dean of engineering. The gift is part of "Aspire: A Plan for Princeton," a five-year fundraising campaign launched by the University in November 2007 with a major goal to support "Engineering and a Sustainable Society."

"Our vision for engineering is to solve societal problems by linking our strengths in science and technology ever more closely with the humanities and social sciences," Poor said. "Jay Sherrerd's great generosity moves us decisively toward that vision."

The Department of Operations Research and Financial Engineering was founded in 1999 and quickly became one of the most popular undergraduate majors at Princeton. Research in the department involves analyzing and managing risk in financial markets and optimizing complex business operations, but extends into many other fields. Current projects range from improving market-based approaches to curb greenhouse gases to searching genetic data for clues to childhood cancers.

The building also will provide the first dedicated space for the recently created Center for Information Technology Policy. The center, directed by Professor of Computer Science and Public Affairs Edward Felten, aims to help leaders in government and business react wisely and with confidence to the explosive growth in digital technologies.

"The building will let us bring together and spark conversations between people who work in different areas that each contains a piece of the story about how computer technology is changing our lives," said Felten. The center attracts associated and visiting faculty in public policy, law, sociology, business and computer science.

"If government or we as a society are going to make good decisions, there has to be a high level of discussion between all these areas," Felten said. "As a center for those discussions, Sherrerd Hall will fulfill a critical societal need."

Since it was founded in 2006, the policy center has had a significant impact on debates regarding computer security and privacy, including electronic voting. In 2007, researchers revealed security vulnerabilities in electronic voting machines, generating a national discussion in the media and government. Visiting scholars at the center this fall will address questions of privacy and Internet governance as well as the policy, legal and business aspects of e-voting technology.

In both its location and design, the new building promises to foster an even greater level of interactions across disciplines, said Robert Vanderbei, the chair of operations research and financial engineering. A three-story atrium, an open stairway and ample common space are designed to encourage serendipitous discussions. "We are very excited and grateful to have this space," Vanderbei said. "The whole atmosphere will be congenial to collaborative research."

The building's glass walls, which complement the Friend Center, will give occupants a clear view of the surrounding academic centers with which they collaborate. It is situated between buildings that house engineering school departments and those that are home to a number of social sciences departments, including the Bendheim Center for Finance, where 10 members of operations research and financial engineering will have joint appointments.

It is also across Shapiro Walk from the Computer Science Building, a center of expertise in the computational techniques used in the department. "The geography maps perfectly with the intellectual content of our work," said Vanderbei.