Below left: This architect's conceptual rendering shows the new building at night.

Courtesy of Frederick Fisher and Partners

Construction of a new building for research and teaching that bridges engineering and the social sciences started the last week of March and will continue for more than a year.

The new building, located off of Shapiro Walk between Mudd Library and Wallace Hall, will house the Department of Operations Research and Financial Engineering and the Center for Information Technology Policy. It is scheduled to be completed in August 2008. 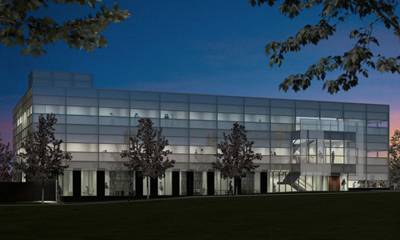 "Construction will be quite heavy during some periods, but we will do our best to minimize disruptions for people who work in that area or travel through it," said Catherine Altadonna, senior project manager in the Office of Design and Construction. For example, the construction work will not block Shapiro Walk, which had been temporarily rerouted during some initial site preparation during the fall semester.

Altadonna urged pedestrians to take special care when crossing Charlton Street, which normally receives little use but will be the main entry and exit route for construction vehicles. The excavation phase in particular will require nearly 800 truckloads of dirt and rocks to be removed, she said.

For the next several months, most of the work will occur below ground. Construction of the steel structure should be visible in September, Altadonna said.

In December 2005, the University announced the selection of the architecture firm Frederick Fisher and Partners to design the building. The glass-faced structure will comprise nearly 46,000 square feet over four floors, one underground and three above ground. In addition to office and research spaces for faculty and graduate students, the building will include two classrooms. A central atrium and a wide, open stairway will create inviting common spaces for impromptu meetings and interactions.

"This building provides critically important space for two growing programs that are having a major impact on problems of security, risk, technology policy and other areas," said H. Vincent Poor, dean of engineering. "It also serves as an important physical connection between engineering and the social sciences. It's going to be a terrific space."