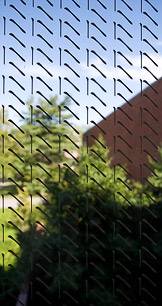 Princeton's newest building, Sherrerd Hall, uses subtle architectural details to blend in with neighboring campus buildings. White frits on the windows help soften the edges of the glass structure and make it more energy efficient by reducing the amount of sunlight that shines inside. Sherrerd's cubed shape echoes nearby buildings such as the Friend Center for Engineering Education and Mudd Manuscript Library, which is pictured here in the background.

Princeton's newest building, a deceptively simple glass cube nestled into the east side of campus, dissolves into the silhouette of nearby sycamore trees and the fiery clouds of a late summer sunset.

The eye seeks to discern edges, to distinguish the building's boundaries against its backdrop -- the sky, the trees, neighboring structures -- but its chameleon skin resists.

The building reflects the trees across Shapiro Walk. "It has an ethereal quality that connects it to its environment," said architect Fred Fisher.

Fisher's vision for the 45,000-square-foot building, which stands along the east end of Shapiro Walk, evolved from the functionalist principle that a structure's essential form derive from its intended purpose. The design foregoes traditional styles and grand artistic gestures in favor of simplicity, reflection and transparency.

"The building starts with two things," Fisher said. "One is the programs that will be housed inside, and the other is the site where it's located on campus."

In commissioning the project, Princeton also sought a building that was distinctive yet in harmony with existing architecture, according to Mark Burstein, executive vice president of the University.

"With each project we try to choose an architect who will design a unique addition to this extraordinary campus," Burstein said. "New structures must also relate to their surroundings. Getting this tension right, which I feel Fred has, is the essential strength of our built environment."

Sherrerd Hall stands on the edge of a quadrangle bordered by several other modernist buildings, including the Friend Center for Engineering Education and Mudd Manuscript Library. Burstein said Fisher's firm was chosen for the project in part because his past work resonated with these existing buildings. 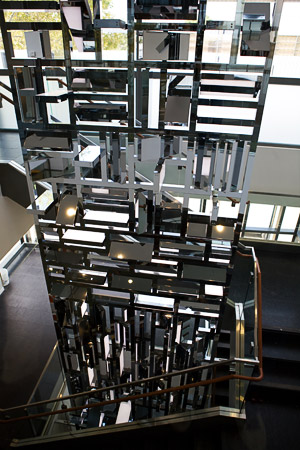 California artist Jim Isermann produced a metal and light sculpture that serves as a centerpiece for Sherrerd Hall's main stairwell. As with the rest of the building, the sculpture plays with light, focusing its lamps in myriad directions while at the same time reflecting the shapes and colors around it.

"Fred had created other very impressive works, but he did not have an extensive portfolio of institutional projects when we interviewed him," Burstein said. "It was a bit of a risk, but Princeton takes its role as a patron of architecture very seriously. We feel the University should give architects who do not have a building on every campus an opportunity to design a project. This type of commission can lead to a fresh approach to design challenges on our campus."

Sherrerd Hall, named for 1952 alumnus John J.F. Sherrerd, shares broad themes and subtle details with its neighbors. Its boxy form and straight lines particularly echo the minimalist outlines of Mudd Library (designed by Hugh Stubbins and Associates and completed in 1976) and the Friend Center (designed by Pei Cobb Freed & Partners and completed in 2001), giving the quad a crisp modernist feel. The buildings are of similar height, and Sherrerd and Mudd feature recessed bases that bring human scale to Shapiro Walk and give the buildings the impression of cubes floating in mid-air.

The cubist theme repeats in the rectangles of Sherrerd and Friend's windows and of Mudd's bricks, a consistency of shape and proportion that lends the quadrangle a fractal quality. To soften the hard lines and blunt the glare of sunlight inside the building, the architects covered Sherrerd with a mix of frosted glass panels and custom windows fritted with white marks that resemble splashes from an artist's brush.

"We wanted to avoid the ice cube character typical of glass buildings," said Joseph Coriaty, a partner at Fisher's firm. "The frits and frosted panels help dissolve the edges and get away from the sense of the building as a solid object."

The building will boast another element to help soften the glare of light: the University's first "green roof." Plant-filled trays are scheduled to be installed on the roof this week to reduce water pollution, energy costs and the emission of greenhouse gases that result from heating and cooling.

"Many little strategies go into making a sustainable building," Fisher said. "The roof absorbs rain runoff. It's also a great insulator. The frit pattern and glazing on the windows reduce solar gain, so the building stays cooler in summer." 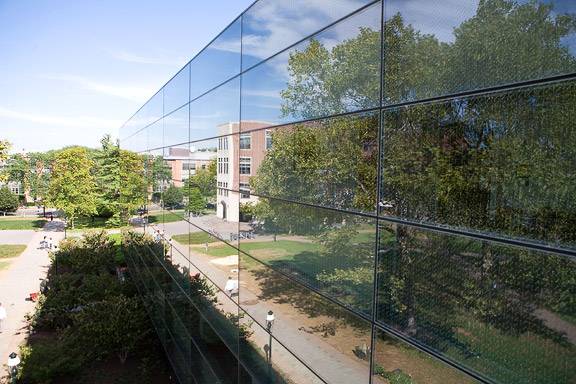 Sherrerd Hall's glass exterior foregoes grand artistic gestures in favor of simple reflection. The building mirrors its surroundings and changes throughout the day as the sun arcs across the sky.

While the exterior treads gently in its built and natural environment, the interior draws its essence from the distinct human culture that calls it home: two academic entities that merge the rarified fields of mathematics and computer science with the organic complexities of human society.

The Department of Operations Research and Financial Engineering, the larger of the two, focuses on helping organizations such as corporations and government agencies to optimize performance while reducing exposure to risk.

"We are the practical side of economics," said John Mulvey, a professor in the department, explaining the financial applications of their research. "We take economics as our science and apply it to real-world problems."

The other inhabitant, the Center for Information Technology Policy, brings together researchers in computer and social sciences to study policy issues related to emerging digital technologies. 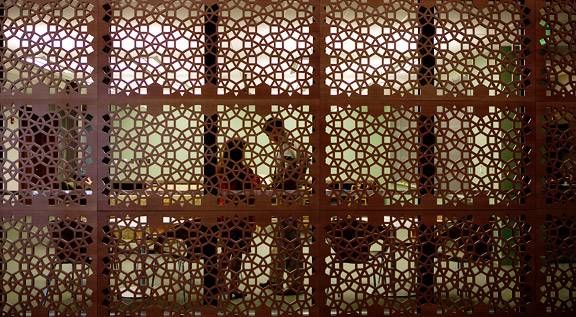 Cherry panels cover the walls of the three-story atrium bringing a "domesticated" feel to the building's interior. The panels feature a geometric pattern from Islamic culture that resonates with the building's dedication to mathematics and learning.

The collaborative nature of these programs, which break down traditional barriers between engineering and the humanities, inspired Fisher to create a building that facilitates interaction among its work-week inhabitants.

The main entrance opens to a three-story atrium, tiled with black granite and dubbed the "town square" by the architects, that provides café-style seating area for people to relax and chat. The theme of informal meeting spaces is echoed on the upper floors, in lounges furnished with cozy couches, chairs and tables, and hung with chalkboards and whiteboards intended to spark brainstorming sessions.

To balance the coldness inherent in the simple geometric forms and glass, Fisher "domesticated" the interior with ample use of wood in office and classroom doors and other accents.

Two decorative elements bring vertical cohesion to the atrium and stairway as they traverse the building's strata. An open stairway climbs through a glass enclosure extending from the front of the building, allowing people inside and out to see who's milling around the interior or walking past on Shapiro Walk.

"We tried to pack the social spaces around the atrium to activate the space," Fisher said. "The stairways are on the outside walls so the life of people moving around inside is apparent. Intellectual and actual transparency were very important."

Even the dark cherry panels that cover the atrium's main wall from floor to ceiling echo the building's dedication to mathematical disciplines. The wood is honeycombed with Islamic space-filling patterns, a decorative style characterized by symmetric webs of repeating polygons and dating from a time when the Islamic world was a beacon of learning and innovation. The panels also cover the back wall of the main lecture hall, bringing a meditative air to the 46-chair classroom.

In another nod to numbers, a sculpture by California artist Jim Isermann, whose work finds a common denominator in complex geometric designs derived from simple shapes and colors, rises through the stairwell.

The sculpture's metallic, trellis-like frame supports dozens of rectangular, chrome-framed lights, each tilting in its own direction, and reflecting more light than it produces. Like the building's exterior, the piece borrows much of its identity from its surroundings.

"Light is a central theme throughout the building," Fisher said. "It's a kind of lantern, a lantern of knowledge and circulation. The transparency facilitates conversation, participation and collaboration."