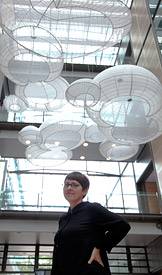 Richmond, Va., artist Kendall Buster was on campus in August for the installation of her work, "Resonance," in the new Frick Chemistry Laboratory. She said the forms "seemed to naturally multiply as each was lifted into place."

Kendall Buster has delved into art and science over the course of her career. The work she created for Princeton University's new Frick Chemistry Laboratory has emerged from both of her worlds.

The clusters of translucent orbs suspended from the 75-foot-high glass roof into the atrium call to mind shapes seen through a microscope lens. The sculpture, titled "Resonance," consists of 14 forms composed of three, four or five connected ovoids and attached by stainless steel aircraft cable at different heights to the structural steel beams of the building. The forms were built with lightweight industrially powder-coated steel frames and covered in a semitransparent outdoor netting called shade-cloth. The surface of each form allows light to both penetrate and reflect.

The sculpture was commissioned specifically for the new building and is part of a long-term initiative to increase the presence of art in new campus construction. Members of the Campus Art Steering Committee oversaw the installation. After three years of construction, the first occupants have begun moving into the 265,000-square-foot laboratory, whose sheer scale makes it the largest single academic building on campus, aside from Firestone Library.

"The choice to commission a major work from Kendall was to my mind an inspired one -- and I can say that because it predates my arrival in Princeton," said James Steward, who became director of the Princeton University Art Museum in April 2009 and co-chairs the committee with University Architect Ron McCoy.

"Her seemingly organic work in highly inorganic materials, suggestive of the budding and merging of biological forms, provides a dynamic counterpoint to the rectilinearity of the new Frick Lab," Steward said. "For me, it's a wonderfully thoughtful consideration of the intellectual purposes of the building in which it resides, meditating on the nature of the research to be carried out in these new labs while also helping to humanize the great scale of the space."

The 27-foot-wide atrium, named Taylor Commons, connects the research and teaching wing of the building with the office wing. Glass covers much of the inside façade, and pedestrian bridges span the space at three locations and at three levels. The area is intended as a gathering place, with study tables and lounge and café seating. 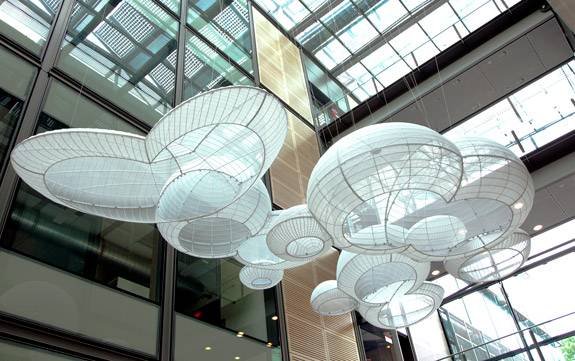 The sculpture brings to mind shapes seen through a microscope lens. It was inspired by models employed to represent molecular structures, according to the artist.

The sculpture was inspired by models employed to represent molecular structures, according to the artist. A professor in the Department of Sculpture and Extended Media at Virginia Commonwealth University who holds an MFA in sculpture from Yale University, Buster worked as a medical technologist in a hospital after studying microbiology in college.

She said the most "exciting and terrifying" aspect of her studio practice is that her work, which typically is designed and built to "converse with the particulars of a given architectural interior space," is only finished when it is installed in the site.

"The installation at Princeton was particularly engaging for me in that the sculpture operated not as a singular object, but as a dispersed configuration of forms which seemed to naturally multiply as each was lifted into place," Buster said.

The forms range in size from 8-by-3 feet to 16-by-10 feet. The sculpture's title, "Resonance," is a play on the multiple uses of the word. Because they are not identical units but discrete structures with a kind of kinship, the individual sculptural forms are resonant with each other. As a group they resonate throughout the massive open space -- "a single form becoming multiplied, the visual effect intensified and prolonged," Buster said.

"One of the most significant discoveries for me in looking at the newly installed sculpture was the way in which the forms appeared so membrane-like and transparent when backlit in the daylight streaming from the glass roof, and conversely, how against the night sky they appeared so opaque," she said. "I was also surprised by the clarity of the reflected forms in the side windows. I designed with such a reflection in mind, but did not dream that the effect would be so distinct and would create the impression of a kind of infinite space."

Steward is captivated by the same phenomenon. "I'm particularly enamored of how Kendall's forms appear from the pedestrian bridges in the space," he said, "and the way in which they reflect into infinity in the glass interiors."

Buster's sculpture joins other recent art commissioned for sites on campus, including Odili Donald Odita's mural "Up and Away" on the lower and first levels of 1967 Hall, one of the Butler College dormitories; Jim Isermann's "Untitled" metal and light sculpture in the main stairwell of Sherrerd Hall; and Sol LeWitt's "Wall Drawing No. 1134 Whirls and Twirls (Princeton)" in the arch of Bloomberg Hall.