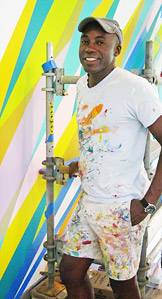 Artist Odili Donald Odita has designed a colorful mural for the main entrance to Butler College's new dormitories. Odita is an associate professor of fine art at Temple University's Tyler School of Art. He finds inspiration in the planes and angles of architecture and in the changing light of days and seasons. (Photo: Courtesy of the Princeton University Art Museum)

Philadelphia-based artist Odili Donald Odita will discuss his striking mural, "Up and Away," at 4:30 p.m. Friday, Oct. 9, in the Butler College Commons on the lower level of 1967 Hall.

James Steward, director of the Princeton University Art Museum, will introduce the program. A reception will follow.

The event is free and open to all, but space is limited. Those planning to attend should RSVP to butlerwu@princeton.edu.

An explosion of color greets students at the main entrance to Butler College's new dormitories, where a mural of bright fractal shapes spans two floors and seven walls.

"Up and Away," the work of Odili Donald Odita, associate professor of fine art at Temple University's Tyler School of Art, was commissioned by the steering committee for Princeton's public art initiative.

"Odili is an artist of remarkable sensitivity to space, architecture and light," said James Steward, director of the Princeton University Art Museum, who co-chairs the committee with University Architect Ron McCoy. "It has been exciting to see him responding to new architecture that honors Princeton's past and yet is of the present moment, and to Butler College as a place in which living and learning merge." 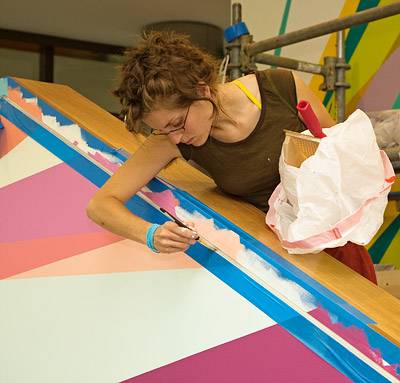 Joy Payton, a member of Odita's crew, uses a small brush on a thin spot, while paint rollers are used on wider areas. All crew members are Tyler alumni. (Photo: Brian Wilson)

The mural is located on the lower and first levels of 1967 Hall, one of five Butler College dormitories that opened this fall. On the lower level is the college's central social space, Butler Commons.

Odita's practice is to spend several days at the site with his sketchbook, observing the space. His initial pencil sketches are transferred to the walls using chalk lines to mark out the shapes. He then assigns colors. A crew of artists handles the laborious process of taping and painting, with each slice of color receiving multiple layers of paint.

The mural represents an opportunity to introduce students to the work of living artists, according to Kelly Baum, the Locks Curatorial Fellow for Contemporary Art at the museum. "Odili's work adds an exhilarating visual component to Butler Commons," she said, "and extends contemporary art beyond the walls of the museum into the fabric of students' daily lives." 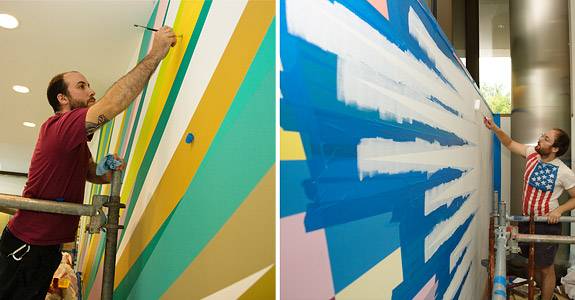 Dustin Metz (left) and Jeremy James (right), fill in the artist's design, which is transferred to the wall from pencil sketches. They tape and paint, giving each slice of color multiple coats. (Photo: Brian Wilson)

Odita is a Nigerian-born artist who grew up in Ohio, works in Philadelphia and New York, and has exhibited in Europe, Africa, Mexico and North America. His unique visual language of multicolored geometric shapes evokes both the media culture of digital screen savers and test patterns as well as traditional African designs.

As with his other site-specific installations, such as "Third Space" in the Ramp of the Institute of Contemporary Art at the University of Pennsylvania (2008) and "Flow" in the Contemporary Arts Center in Cincinnati (2007), Odita finds inspiration in the planes and angles of the existing architecture and in the changing light of days and seasons sweeping over the walls.

In the case of Butler Commons, the artist was particularly taken with the building's sense of porous boundaries and with the rough-hewn edges of the amphitheater in Butler Memorial Court, and he incorporated both influences into "Up and Away."

The mural joins previous examples of public art commissioned for sites on campus, such as Sol LeWitt's "Wall Drawing No. 1134 Whirls and Twirls (Princeton)" in the arch of Bloomberg Hall and Jim Isermann's "Untitled" metal and light sculpture in the main stairwell of Sherrerd Hall. 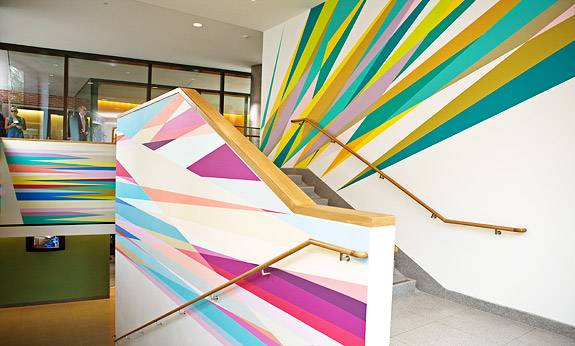