The seeds of a multi-venue exhibition opening April 27 at Princeton University, "Hanne Darboven’s Address — Place and Time," were planted in a seminar a year ago.

Hanne Darboven (1941–2009) was an important figure in the history of conceptual art. An exhibition on view through June 24 at the Princeton University Art Museum features works on paper from the German artist’s breakthrough period in New York in the late 1960s to her mature work of the 1970s and ’80s. 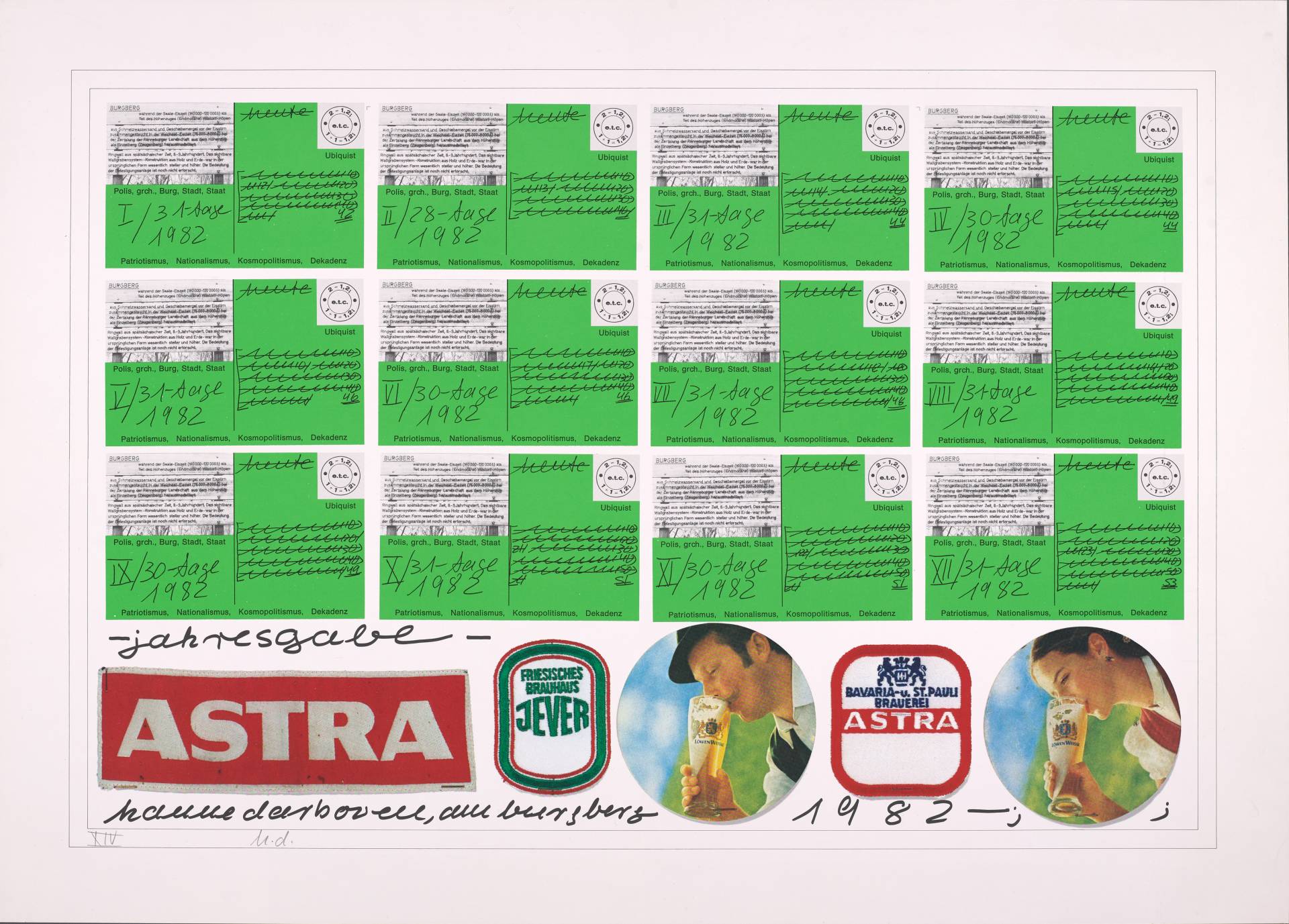 Hanne Darboven, "Untitled," 1982, color offset lithograph. Nathan Stobaugh, a graduate student in the Department of Art and Archaeology, prepared the wall label for this work, which is featured in a new exhibition on Darboven's work at the Princeton University Art Museum opening April 27. Stobaugh was among the students in a spring 2017 seminar taught by Brigid Doherty, associate professor of German and art and archaeology, and director of the Program in European Cultural Studies, where the idea for the exhibition began.

The exhibition emerged from a spring 2017 seminar "Art Against Culture?" led by Brigid Doherty, associate professor of German and art and archaeology and director of the Program in European Cultural Studies. Students explored the wide range of ways in which Darboven and other artists and writers in late 20th-century Germany sought to disrupt cultural norms for the representation of time and place in response to the difficulties of reckoning with recent German history, Doherty said.

As part of the seminar, the students spent two Saturdays in New York City. At the outset of the course, students visited the installation of Darboven’s magnum opus, "Cultural History 1880-1983" (created from 1980-83) at the Dia Center for the Arts. As the semester was coming to a close, the class revisited "Cultural History 1880-1983" in the company of New York-based artists Nick Mauss and Ken Okiishi, following a visit to their shared Manhattan studio. Also on the second visit, the students spoke with artist Silvia Kolbowski at her Brooklyn studio. In fall 2012, Kolbowski visited one Doherty’s courses at Princeton. Mauss and Okiishi were previously based in Berlin, where they met with students in Doherty's spring 2012 Freshman Seminar. 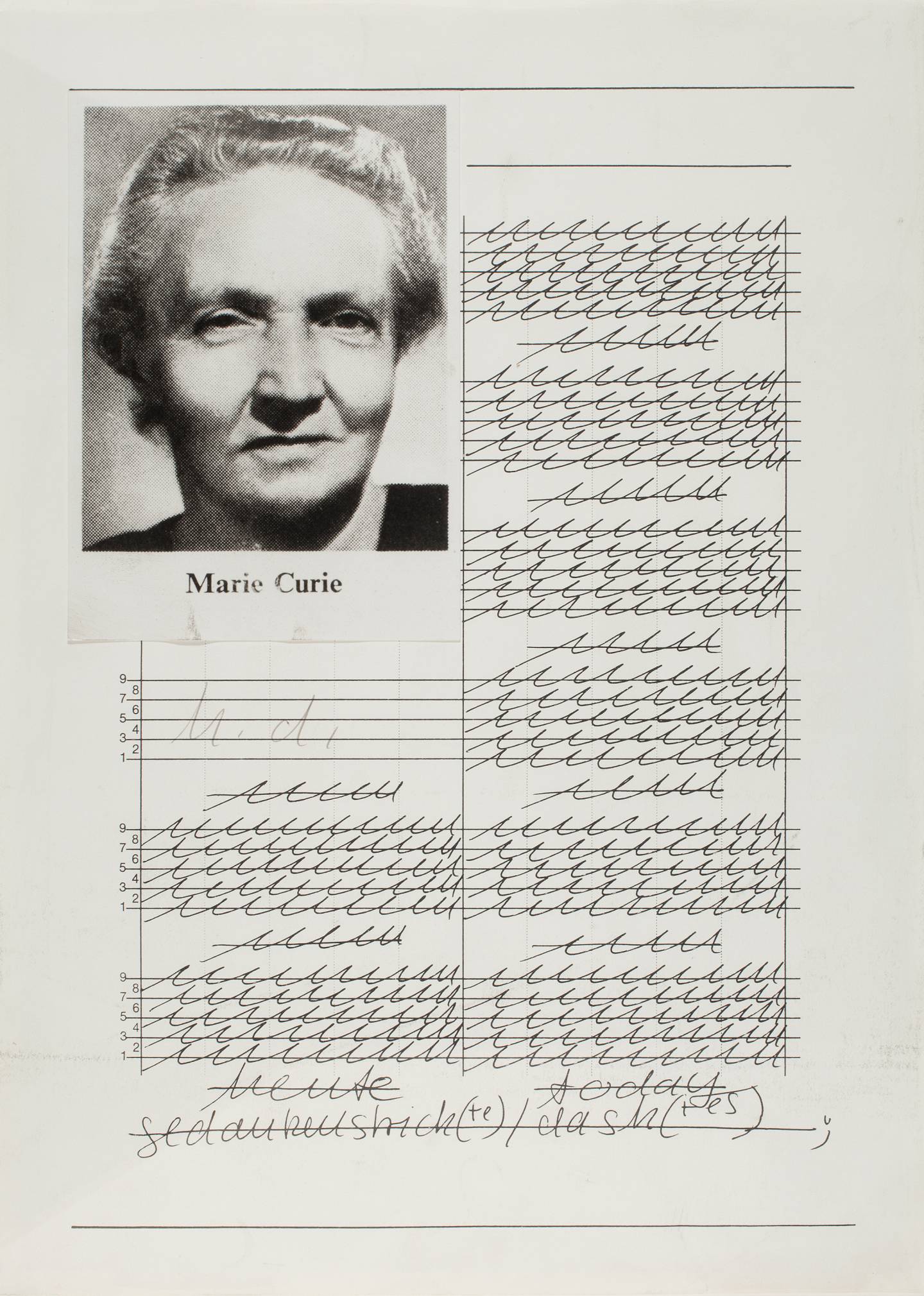 Hanne Darboven, "Untitled," ca. 1989, offset lithograph with photographic collage and pencil. Junior Cecily Polonsky prepared a didactic text about this preparatory sketch for an edition of prints based upon Hanne Darboven’s “Quartett >88<." The work is on view beginning April 27 in the Department of German, 207 East Pyne, where visitors can pick up Polonsky’s text as a handout.

"This exhibition is the result of the extraordinary opportunities for collaboration across academic disciplines and among various fields of practice in the arts and humanities that are available at Princeton today," Doherty said.

Doherty's seminar students have been involved in every phase of the development of the exhibition and its opening-day events — including the selection and installation of the works. Especially valuable to the students was the opportunity to work closely with experts in the art museum and the Marquand Library, Doherty said. Following are examples of the students' experience:

"There are few institutions with not only the wherewithal to acquire significant works of art by major contemporary artists," Doherty said, "but also the commitment to bring internationally recognized artists and composers to campus in order to make themselves available to work closely with graduate and undergraduate students in interdisciplinary humanistic and artistic inquiry."

Mauss and Okiishi — as well as artist and composer Seth Cluett, a 2013 graduate alumnus in music composition, who also visited the "Art Against Culture?" seminar — will be featured in the day-long program of events on Friday, April 27.

The exhibition "Hanne Darboven’s Address — Place and Time" presents a selection of works that explore how space, time and communication were organized and experienced in 20th-century European culture. Using a variety of techniques for drawing, writing and arithmetical calculation, Darboven reconfigured elements derived from the Gregorian calendar, the postal system and personal correspondence, including picture postcards and handwritten letters.

Beginning in the mid-1970s, a critical exploration of methods of historical documentation, advertising and news media became central to Darboven’s art, which expanded dramatically in scale. "Cultural History 1880–1983," for example, confronts the legacies of National Socialism and the Holocaust while taking up topics related to the Cold War and West German politics of the 1970s and ’80s in a monumental work that comprises nearly 1,600 graphic panels and 19 sculpture-objects. Featuring a 2003 print edition of "Cultural History 1880–1983" from the collection of the Princeton University Library, this exhibition explores connections between Darboven’s early drawings and her later large-scale works.

The exhibition also includes works by the American artist Sol LeWitt (1928–2007), with whom Darboven maintained a close friendship and carried on a decades-long correspondence after the two artists met in New York in the 1960s. An important early drawing by Darboven from LeWitt’s personal collection is featured.

“University museums are at their best when they provide unique experiences to our students that can also offer great value to visitors of all kinds,” said James Steward, the Nancy A. Nasher-David J. Haemisegger, Class of 1976, Director, Princeton University Art Museum, and lecturer with the rank of professor in art and archaeology. “This collaboration around the work of an essential conceptual artist whose concerns are so germane today exemplifies these virtues at a modest scale.” 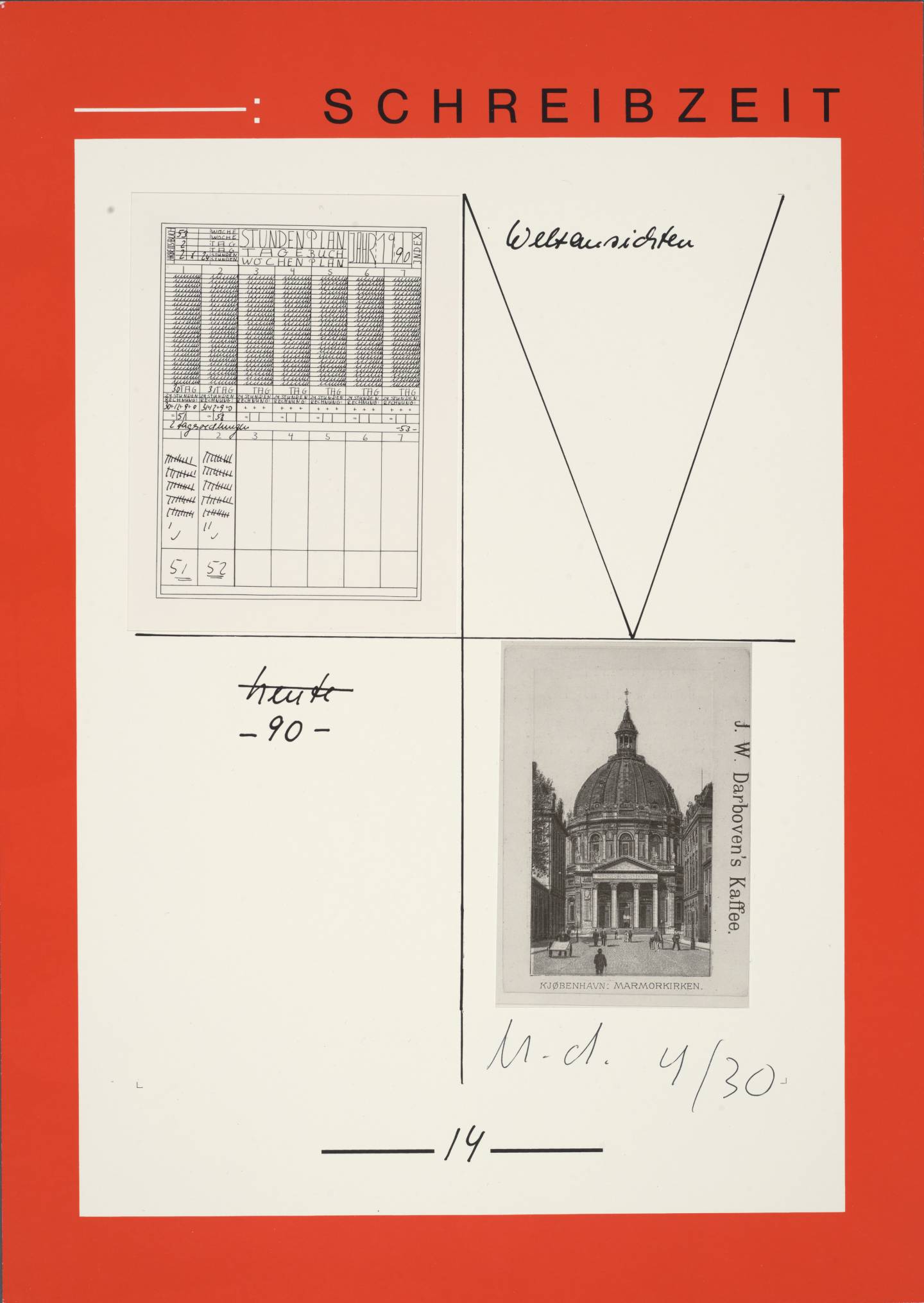 Please note: all events are located throughout Princeton University’s campus.

"Sea Change: Readings from Homer’s 'Odyssey,'" 2:30 p.m., Princeton University Art Museum. Readings from Homer’s epic poem in a 2017 English translation by Emily Wilson, in a 1781 German translation by Heinrich Voß, and in ancient Greek. In 1971, Darboven produced the 70-part work, "Homer’s Odyssey, Songs 1–5," for which she copied out by hand, page by page, the first five books of Homer’s text as it appeared in her own paperback copy of Voß’s translation.

"The Audible Number and the Legible Trace," 5 p.m., 106 McCormick Hall. Lecture by Seth Cluett, composer and artist, on the musical practice of Darboven. Cluett has presented his work internationally at venues such as the Whitney Museum, MoMA/PS1, Moving Image Art Fair, CONTEXT Art Miami, GRM and STEIM. He is the assistant director of the Computer Music Center and Sound Art Program at Columbia University and artist-in-residence with Experiments in Art and Technology at Nokia Bell Labs, where he maintains a studio and is active in research on virtual and augmented reality acoustics and multisensory communication.

"Darboven Tracings," 6 p.m., Princeton University Art Museum. Premiere of a musical work by composer and artist Seth Cluett that was commissioned by the Program in European Cultural Studies following Cluett's visit to Doherty's spring 2017 seminar "Art Against Culture?" The work will be performed with collaborators Lainie Fefferman, a 2015 music graduate alumna; Jascha Narveson, a 2009 music graduate alumnus; and Jeff Snyder, director of the Princeton Laptop Orchestra. Amanda Morrison, a member of the Class of 2019 who is majoring in the Woodrow Wilson School of Public and International Affairs and is also pursuing a certificate in visual arts, will produce a video of the performance. A reception in the museum will follow.

The works in Marquand Library, McCormick Hall, can be viewed 9 a.m.-4 p.m., Monday through Friday, until July 27. Please inquire at the Marquand Library front desk regarding the Darboven case exhibit.